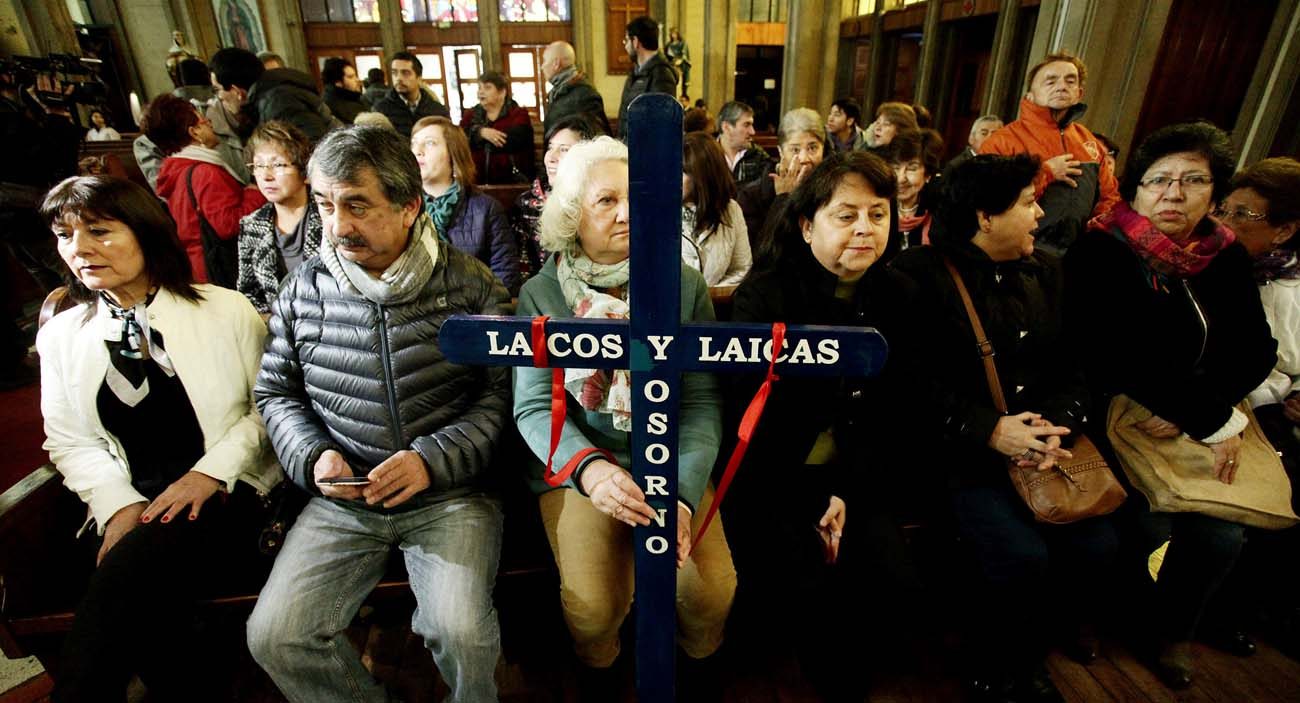 Members of the organization "Laity of Osorno" take part in a Mass celebrated by special Vatican envoys, Archbishop Charles Scicluna and Father Jordi Bertomeu Farnos, in Cathedral of St. Matthew in Osorno, Chile, June 17. The Vatican envoys, who investigated clerical sexual abuse in Chile, were on a mission to promote healing. (CNS photo/Fernando Lavoz, Reuters)

VATICAN CITY (CNS) — The brother of Chilean Father Fernando Karadima called on his brother to ask forgiveness for the hurt inflicted on those he sexually abused.

“I would ask him to be humble. Fernando, ask for forgiveness. Not in silence to God or in your prayers. Do it publicly, that people hear that you ask forgiveness for the harm you have done to victims and to everyone,” Oscar Karadima said in an interview with Chilean newspaper La Tercera, published June 17.

Oscar Karadima also revealed that he was among the group of priests and laypeople who met with Pope Francis June 2 and spoke to him about the suffering his family endured following the revelation that his brother was found guilty of sexual abuse.

“I spoke to him about Fernando; I told him what Fernando was like with his family, with us: He was an arrogant man, authoritarian, a man we were afraid of and that even my mother was afraid of him,” Oscar Karadima said.

Recalling his conversation with the pope, Oscar Karadima said his family members “were also victims of abuse of power and of conscience” by his brother. Their family name, he added, was tarnished due to the scandals.

Known as an influential and charismatic priest, Father Karadima drew hundreds of young men to the priesthood, and four of his proteges went on to become bishops, including retired Bishop Juan Barros of Osorno.

After accusations of sexual abuse came to light in 2010, the Vatican investigated Father Karadima and sentenced him to a life of prayer and penance after he was found guilty of sexual abuse.

Oscar Karadima said he also wanted to inform the pope of the four bishops who formed part of Father Karadima’s inner circle and that “they were witnesses and covered up abuses.”

“The pope stopped me and said, ‘Speak to me about Barros.’ I told him, ‘Your Holiness, Bishop Barros lied. He was my brother’s friend and, in a certain way, you can say he belonged to his ‘iron circle,'” Oscar Karadima recalled. The pope had accepted Bishop Barros’ resignation June 11. Abuse survivors have alleged that when Bishop Barros was still a priest, he witnessed their abuse by his mentor.

“Everyone knew that they were made bishops because my brother Fernando was able to make it so, through his friendship or closeness with (Cardinal) Angelo Sodano,” he added.

Cardinal Sodano, dean of the College of Cardinals, served as apostolic nuncio to Chile from 1978-1988 and as Vatican secretary of state from 1991-2006.

Karadima recalled tearing up as he recounted his and his family’s pain and that Pope Francis touched his hand and encouraged him.

After listening to him, he added, the pope grabbed a piece of paper and wrote a message for the Karadima family.

“To the family of Oscar Karadima, with my blessing and my sorrow for so much suffering that you bear. In the name of Fernando, silent and incapable of realizing (his mistakes), I ask your forgiveness,” the pope wrote.

Karadima said he was moved by the pope’s gesture and said it was the first time someone from the Catholic Church recognized his family’s pain.

“Neither (Cardinal Riccardo) Ezzati, nor (Cardinal Francisco Javier) Errazuriz, nor anyone acknowledged our pain. That is why what I also ask for — because no one has said it — is justice for my family. The pope was the only one who had words of affection and consolation toward them,” Oscar Karadima said.

Pope Francis has made seeking forgiveness and promoting reconciliation a priority in the fallout of the sexual abuse crisis that has rocked the Chilean church.

Archbishop Charles Scicluna of Malta, president of a board of review handling abuse cases within the Congregation for the Doctrine of the Faith, and Father Jordi Bertomeu Farnos, an official of the doctrinal congregation, concluded their June 14-17 visit to the diocese of Osorno with a Mass at the Cathedral of St. Matthew.

During the Mass, Archbishop Scicluna, Father Bertomeu and Auxiliary Bishop Jorge Concha Cayuqueo of Santiago, apostolic administrator for the Diocese of Osorno, kneeled before the congregation and asked forgiveness.

“Pope Francis has entrusted me to ask forgiveness for each one of the faithful of the Diocese of Osorno and all the citizens of this territory for having wounded you and profoundly offending you,” Archbishop Scicluna said.

Addressing journalists after the Mass, the archbishop thanked the people of Osorno for welcoming him and said the visit was only the beginning of the journey toward reconciliation.

True reconciliation, he said, isn’t achieved with a mission of a few days, but is rather a gift from God that must be accompanied by long process that requires patience, generosity and humility.”

NEXT: Pope asks people to value contributions refugees can make