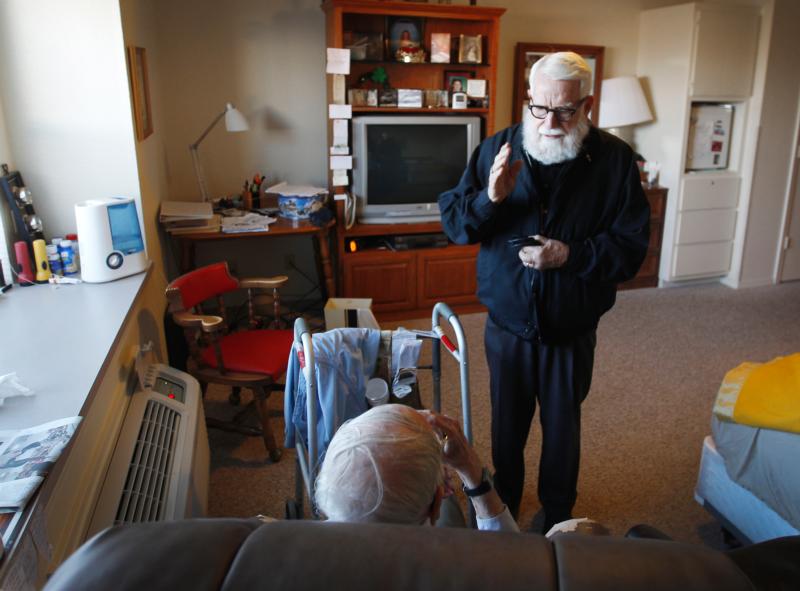 Deacon Loren Luchen from Christ the King Parish in Tulsa, Okla., brings the Eucharist to Eugene Byrnes in 2016. Deacon Luchen has been visiting the sick and house-bound people for more than 30 years. He is one of 18,287 deacons currently serving the U.S. Catholic Church. About 40 percent of the world’s deacons are in the U.S. (CNS photo/Dave Crenshaw, Eastern Oklahoma Catholic)

WASHINGTON (CNS) — Since the permanent diaconate was re-established in the Catholic Church 50 years ago — the church uses the term “restored” — the number of permanent deacons in the United States are now roughly half the number of priests.

Where would the church be without these deacons?

“That’s a very good question,” replied Mary Gautier, a senior research associate at the Center for Applied Research in the Apostolate.

(Related story: Deacons called ‘messengers,’ ambassadors between a bishop and his diocese)

Gautier is the co-author of a new book published this year by CARA, “Word, Liturgy, Charity: The Diaconate in the U.S. Catholic Church, 1968-2018,” which examines how the diaconate has played itself out in the life of the church over the past half-century. “Not that they replace priests, but they certainly complement one another,” she said.

The idea of the permanent diaconate “took off really well in the United States. It was a raging success here,” Gautier added.

Once deacons are in, they’re in pretty much for good.

“There is some attrition, but it’s very, very small,” Gautier told Catholic News Service. “Some of it may have to do with the fact that deacons can’t even be ordained until they’re 35 — married deacons, anyway. They come in as married men. They’ve already sort of figured things out. They’re very stable.”

Nor has the permanent diaconate been tarnished by the clergy sex abuse scandals. “We collect the numbers on that,” Gautier said, “and it’s virtually nil. Never more than 1 percent of all the reports.”

“Deacons are ordained for menial work that no one else wants to do: prison ministry, visiting the sick, hospital ministry, sacramental training,” said Deacon Tom Dubois of the Diocese of Toledo, Ohio, executive director of the National Association of Diaconate Directors. And, he laughed, “I’ve done all of them” since being ordained a deacon 18 years ago.

And it’s all done pretty much for free. “By design, the deacon is not on a stipend. We don’t get paid for doing our ministry. We don’t get anything,” Deacon Dubois said. “In my own case, the Toledo Diocese, we have some money set aside for retreats and continuing education — the same for priests.”

Deacons are expected to work in the everyday world. And they do, Deacon Dubois said, “although there are a few deacons who are very well off. They’re still humble people.”

Deacon Dubois said he had thought about the priesthood when he was a young teen, but decided it was not for him. “I had the thought years later when I entered deacon formation. I really put it together. I was being called to the diaconate, but when I was being called, the diaconate hadn’t been restored yet.”

Deacon Ray Duplechain, director of the diaconate program in the Archdiocese of New Orleans, has been a deacon for 22 years. Deacon Duplechain said spousal support is necessary for a permanent deacon to success in ministry.

“I was in lumber and building materials, construction, for the first part of my career,” he told CNS. “My wife is a veterinarian and she had two hospitals, and I was managing those before I took this job” with the archdiocese. “It was my way of being able to support her.”

His road to the permanent diaconate wasn’t cut and dried. “I always had a sense within me that God was talking to me — not hearing voices or anything, but hearing what that was,” Deacon Duplechain said. “When my pastor asked me to consider it, I didn’t know what a deacon was. So I opened the door and Catholic Encyclopedia and read it — then I told my pastor no.” He later changed his mind.

Deacon Duplechain said he was looking forward to the National Diaconate Congress later in July in his native New Orleans: “There is still quite a bit of interest in it (the diaconate). When people see what deacons do, and discern, we feel there are still plenty more out there who are being called. It’s not waning.”

One sticking point for deacons can be how priests regard them and their ministry, and the assignments given them by a priest.

“Bishop (W.) Sean McKnight (of Jefferson City, Missouri), when he was doing his doctorate, studied the diaconate,” Deacon Dubois said. “He just released a book about the diaconate.” He added the deacon serves, in essence, as an “emissary for the bishop. The deacon becomes the bishop’s man to do something the bishop wants done. If you think in those terms,” he added, “it really opens up the possibilities.”

“I was dissatisfied with the answer, ‘What is a deacon for?’ The typical response was ‘ministers of charity.’ Well, we’re all called to be ministers of that,” from the pope to the laity, Bishop McKnight told CNS. “So I began exploring. And it developed into a dissertation. I defended that in 2001. Ever since I’ve been reworking that and updating it.”

And not a moment too soon, either. “I was announced (for the bishopric) in November and my deadline for getting the last things done was the first week of December,” said Bishop McKnight, former head of the U.S. Conference of Catholic Bishops’ Secretariat for Clergy, Consecrated Life and Vocations.

The book, “Understanding the Diaconate: Historical, Theological and Sociological Foundations,” was published by The Catholic University of America Press.

“We often compare the deacon to priests, and that’s a mistake,” Bishop McKnight said. “And we often consider their value as stand-ins or replacements, in places where we have a lack of ministerial priests. But deacons only make sense in the context of priests. We have deacons because we have priests, not because we’re lacking them, to fulfill their own ministry in the church.”

“Normally it takes a good 100 or 200 years to implement an ecumenical council. And we’re still working through the kinks of permanent diaconate,” he added, mentioning “confusion” about their role and the expectation of them being some kind of “mini-priest” chief among them.

In the Jefferson City Diocese, Bishop McKnight has about 60 or so permanent deacons. “I think that’s enough,” he said.

Deacons are “kind of an unknown quantity, and a relatively large one,” CARA’s Gautier said. “I hope that this 50th anniversary really builds a good awareness for them so they do get a little more attention,” she added. “It’s a fascinating and under-observed part of the church.”