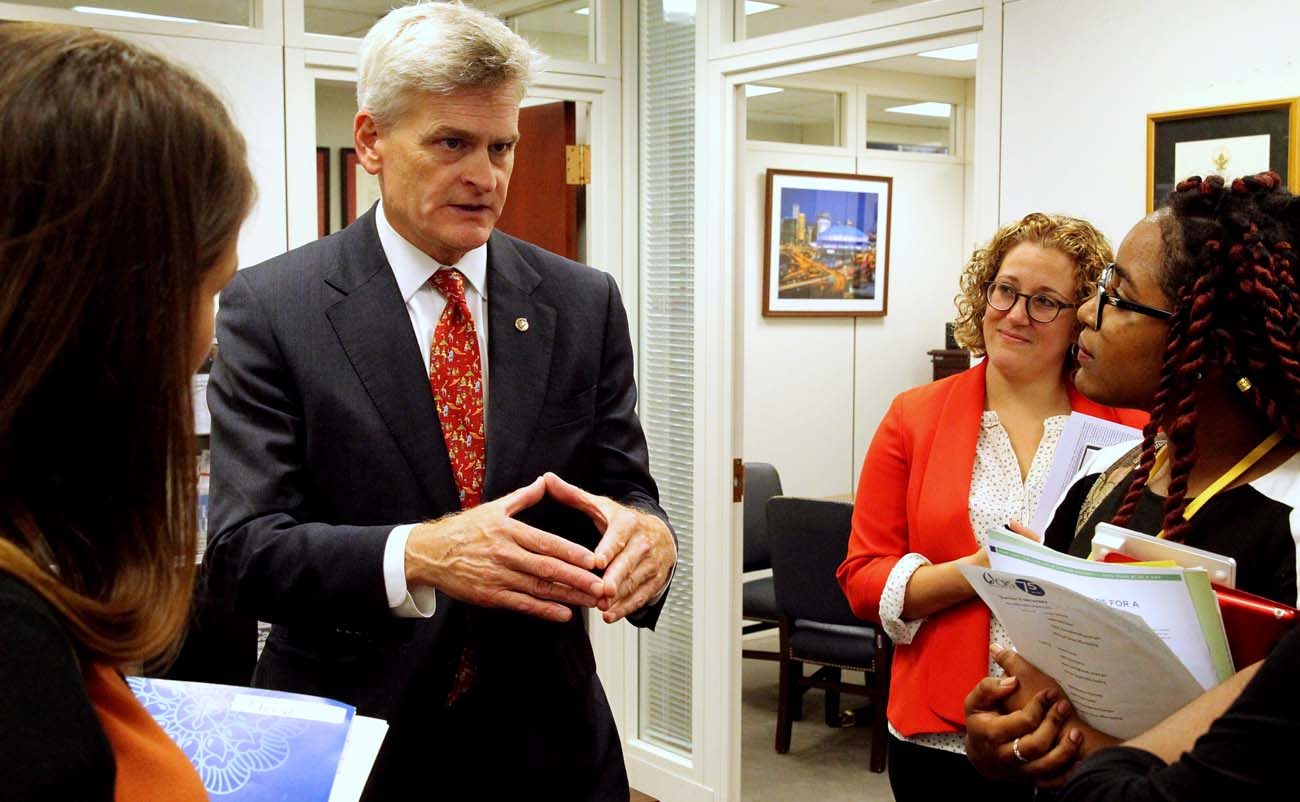 WASHINGTON (CNS) — Denise Ssettimba just began her brief presentation to an aide to Sen. John Kennedy, R-Louisiana, on the need to maintain U.S. funding for global anti-hunger efforts when two congressional dining staffers with food carts in tow asked to squeeze by in a busy hallway in the Dirksen Senate Office Building.

The 18-year-old Xavier University of Louisiana student stepped a little closer into the tight circle around the aide, Kaitlyn Dwyer, staying on message.

“We want to share that there are a lot of ways that this aid helps people avoid migration,” Ssetimba said.

“The issues of global hunger and migration are intimately linked because hunger is one of the causes of migration,” Woolverton said. “When we can provide funding for programs that can provide sustainable solutions … not creating dependency but creating systemic change in farming communities, we can prevent some of these problems.”

The four students asked Dwyer to be sure to share with Kennedy their concern that no funding be cut from international poverty-reducing programs.

The students from New Orleans, part of the CRS Student Ambassador Leaders Together initiative, were helping carry that message to Congress July 18. In a second meeting, they were able to share their concerns directly with Sen. Bill Cassidy after talking for 15 minutes with Maria Sierra, a policy adviser to the Louisiana Republican.

They joined more than 150 students from 58 Catholic and non-Catholic colleges and universities who participated in the four-day Student Ambassador Leadership Summit July 15-18 organized by CRS.

The students spent their last day of the summit visiting members of Congress, sharing the same message that Archbishop Paul D. Etienne of Anchorage, Alaska, and Cardinal Orlando Quevedo of Cotabato, Philippines, brought to Capitol Hill a day earlier.

The programs they addressed were targeted for an overall 36 percent cut in federal spending in the White House Office of Management and Budget’s proposed fiscal year 2019 spending outline. The OMB plan seeks to reduce funding to $15.1 billion from nearly $23.8 billion authorized for the current fiscal year, which ends Sept. 30. Such spending comprises about 0.5 percent of the federal budget.

Having so many young people bringing a consistent message to Congress was sure to have an impact, Kathleen Kahlau, senior adviser at CRS, told the students before they fanned out across Capitol Hill.

“You’re bringing some good news. Not the Gospel in the religious sense, but good news in the sense that you’re sharing with these staffers the fact that what America does through its aid is effective, is efficient, does really save lives,” Kahlau said.

Three days preparing for the congressional visits served to create broader awareness of the work of CRS and deeper understanding of the importance of U.S. aid for that work, students said. Several students who are CRS campus ambassadors told Catholic News Service they were willing to step away from jobs, summer internships and research projects to advocate for people without a voice.

“Coming here has shown me how everything is so connected,” said Emily Baca, a student at St. Martin’s University in Lacey, Washington. “I think that this program can really help by bringing together different people who are passionate in different ways.”

Manhattan College student Kaiyun Chen explained that although she doesn’t practice any faith, she was motivated to become involved as a campus ambassador because of the nature of the agency’s work.

Students also said they planned to return to their campuses this fall ready to share what they learned about the global work of CRS and encourage others to join them in promoting the agency.

“We want to bring more attention to global issues,” said Carla Aguirre Puerto, a student at the University of San Diego, following a meeting with an aide to Sen. Dianne Feinstein, D-California. “We need to be more aware of and advocating for the services provided across the ocean.”

It’s that role as an advocate that motivated Kaitlyn Toth, a political science major at Ohio State University student, to become a campus ambassador two years ago and make the trip to Washington this year. She earlier worked with the Diocese of Cleveland’s Catholic Charities Migration and Refugee Services and saw the challenges facing migrants around the world.

“I really believe there’s power in each individual’s voice,” she said. “Spending time and showing up and showing people that you do care enough to speak for others holds a lot of weight.”

NEXT: Cardinal calls all to pray Supreme Court will move to protect life in law