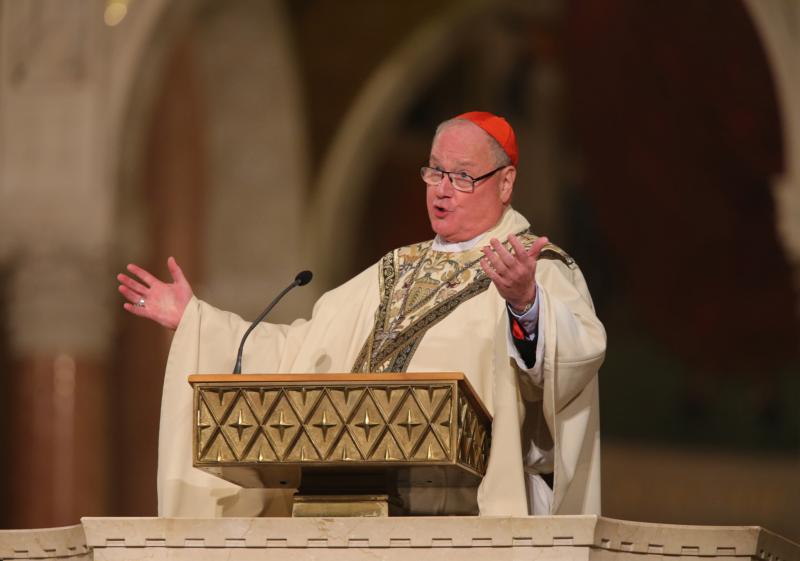 New York Cardinal Timothy M. Dolan, chairman of the U.S. bishops’ Committee on Pro-Life Activities, delivers the homily Jan. 18 during the opening Mass of the National Prayer Vigil for Life at the Basilica of the National Shrine of the Immaculate Conception in Washington. (CNS photo/Bob Roller)

WASHINGTON (CNS) — New York Cardinal Timothy M. Dolan, chairman of the U.S. bishops’ Committee on Pro-Life Activities, called July 19 for a national prayer campaign effort that “the change in the U.S. Supreme Court will move our nation closer to the day when every human being is protected in law and welcomed in life.”

“As soon as Supreme Court Justice Anthony Kennedy announced his retirement, pro-abortion groups began lobbying the U.S. Senate to reject any nominee who does not promise to endorse Roe v. Wade,” the cardinal said in a statement.

“While the U.S. Conference of Catholic Bishops does not support or oppose the confirmation of any presidential nominee,” he said, “we can and should raise grave concerns about a confirmation process which is being grossly distorted by efforts to subject judicial nominees to a litmus test of support for Roe v. Wade. And we must pray.”

He invited all people of goodwill to pray each Friday from Aug. 3 to Sept. 28 in a “Novena for the Legal Protection of Human Life.” The USCCB said “Call to Prayer” materials will be accessible at https://bit.ly/2JBU1MH. Materials include prayers and educational resources and an invitation to fast on Fridays for this intention.

Those wishing to join this nine-week prayer effort can sign up at www.usccb.org/pray to participate in this and subsequent Call to Prayer initiatives via email or text message.

“May Our Lady of Guadalupe intercede for the healing of our nation and our people from decades of abortion on demand,” Cardinal Dolan said.

President Donald Trump announced July 9 that his nominee for the Supreme Court is Judge Brett Kavanaugh, a federal appeals court judge in Washington and a Catholic who once clerked for retiring Justice Anthony Kennedy.

In remarks at the White House after his nomination, Kavanaugh said if he is chosen to be on the Supreme Court, he would “keep an open mind in every case” and “always strive to preserve the Constitution of the United States and the American rule of law.”

NEXT: Simple act of providing jugs of water in desert prevents migrant deaths