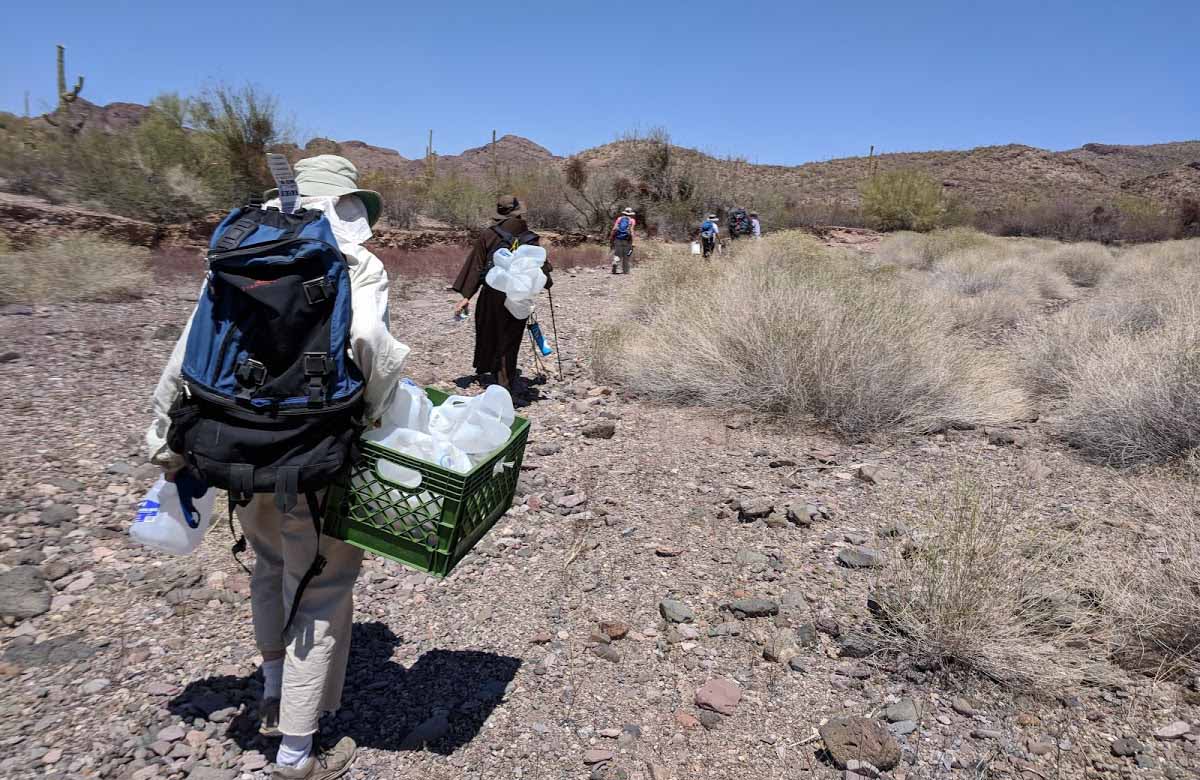 The Tucson Samaritans trek back to their vehicles in late May after their final stop for the day, carrying trash and empty water jugs in the Sonoran Desert northeast of Ajo, Ariz. The Tucson Samaritans is a humanitarian aid organization founded in 2002 as a mission of Southside Presbyterian Church to prevent death and suffering along the U.S.-Mexico border. Its volunteers drop off food and water in various locations in the desert. (CNS photo/Peter Tran, Global Sisters)

AJO, Ariz. (CNS) — In the Sonoran Desert northeast of Ajo, temperatures can soar to mid-90s in late spring and above 100 degrees in the summer.

This vast, arid landscape of mountain ranges, arroyos and valleys, typical throughout southern Arizona, is where undocumented migrants make a path to find a better life in the United States. This also is where hundreds of unfortunate ones have taken their last breath.

Sister Judy Bourg, a regular volunteer with Tucson Samaritans, recalled a jarring experience in late 2017 when she and other volunteers encountered a human skull under a mesquite tree in the desert near Ajo. “Silence fell over our group as we realized what we had discovered,” she said. They contacted the sheriff’s office in Ajo, which sent two deputies to collect the remains.

Sister Bourg, a School Sister of Notre Dame, said the deputies “respectfully removed the skull” and sent it to the medical examiner’s office in Tucson.

The Tucson Samaritans, a humanitarian aid organization founded in 2002 as a mission of Southside Presbyterian Church to prevent death and suffering along the U.S.-Mexico border, drop off food and water in various locations in the Sonoran Desert. They come from various faith traditions or none at all. Using two donated four-wheel-drive vehicles, the volunteers carry water, food, emergency medical supplies, communication equipment and maps out to the desert daily to help people who are crossing the landscape.

The Samaritans’ major mission is to provide humanitarian assistance to keep migrants from dying of dehydration. Joining this collaborative effort on a late spring day in May were two Franciscan friars, two School Sisters of Notre Dame, a Quaker, a retired nurse, a lay Franciscan commercial pilot, and a church administrator.

With temperature in the mid-90s, they carried out two operations. The first was a quick check of locations where they had previously dropped off water jugs just outside Ajo. The second trip was a drive through the heart of the desert east of the town, then along the Coffeepot Mountain, more than 50 miles north of the U.S.-Mexico border.

Susannah Brown, a retired nurse and member of Ajo Samaritans, a group started with Tucson Samaritans’ help about seven years ago, led the two-vehicle operation in a pick-up truck loaded with green crates of one-gallon water jugs. She said the Ajo Samaritans discovered 58 human remains in 2017, which was unusual as they did not see that many in previous years.

On the first stop, the volunteers scoured the area looking for empty jugs or other signs of migrants using this trail. They found an empty water jug, black. Black plastic jugs are brought from Mexico, while the Samaritans’ are clear plastic. The Samaritans replaced the empty jugs with six new ones and covered them with a green crate.

To prevent animals foraging it, they put a few rocks on top of the crate. “Since the desert is so vast, it is hard for migrants to know where we are leaving the water bottles. Our role is to do continuous reconnaissance of trails to identify which are being used by migrants,” said Sister Bourg, who has joined the Tucson Samaritans on their missions for seven years.

After completing the drop-off, everyone got back in the vehicles. They passed a cholla cactus forest with giant saguaros standing tall in the background.

Asked if she encounters any detractors, Brown said she has heard it all: “Go back to where you belong;” “they come to steal our jobs;” “they deserve to die if they want to risk their lives,” she said. At one location where the jugs were placed a few weeks earlier, the group found six empty ones. Upon closer look, they saw each had been deliberately punctured, seemingly from the inch-wide blade of a pocket knife. Someone said, “Whoever did this must be accountable … in the end.”

The group repeated the drop-offs at various locations and finally came to an area impassable for their vehicles. With the temperature climbing, everyone carried as many gallons as possible in backpacks and trekked about two miles to a marked drop-off spot. At this location and in the surrounding area, they found 17 empty gallon jugs, some empty food cans, socks and other clothing.

“Only God knows what was going on here, but we know someone was using the water,” one of the Samaritans said. Although hot and tired, everyone seemed pleased to see empty water containers. After six hours in the desert, the group packed up the trash and empties and started walking back to the vehicles. It was a “good” day, said Sister Bourg, wearing a “humanitarian aid is never a crime” T-shirt.

Several organizations, including Humane Borders, No More Deaths and Green Valley-Sahuarita Samaritans, carry out similar operations in the Sonoran Desert. Ending migrant deaths and related suffering on the U.S.-Mexico border is also a mission of the Colibri Center for Human Rights, said Reyna Araibi, co-founder of the Tucson-based non-profit organization. From January to June 20, the number of migrant deaths in Arizona stood at 56, she said, adding that from 1998 to 2017 more than 7,200 people have lost their lives.

The most common cause of death for 55 percent of the migrants whose remains are recovered is hyperthermia, hypothermia or heat stroke, Araibi said. For the rest, the cause is “undetermined” because of the condition of the remains.

Sister Bourg spent 11 years in Guatemala where she witnessed the pain and suffering of people who struggled to feed and clothe their children. “Although they were poor, they welcomed me.” It was this generosity that moved her to the work of hospitality for migrants.

Upon her return to the U.S. in 1997, she worked at a clinic in Texas for migrants and unaccompanied children from Central America. In 2010, four sisters from her congregation opened a new community in Douglas, Arizona. Their main ministry is to work with deported adult migrants at a humanitarian aid center just inside Mexico’s border in Agua Prieta.

Reflecting on her desert ministry, Sister Bourg recalled that “one early morning in the desert we encountered a middle-aged man who was stumbling toward us and collapsed. We were able to revive him, as we had two nurses with us. He said he had walked for days and had no other possessions except a tin pie plate. He ran out of water, so he drank his own urine. That’s why the pie plate. He decided to rest under a mesquite tree and continue his journey in the evening. I believe we saved this gentleman’s life.”

She said her “most joyful experiences” are when she sees that water containers left weeks earlier have been used. Another “special poignant memory,” she said, is when she found the words “muchas gracias” carved into the dirt in large letters.

Tran is assistant director of the Redemptorist Renewal Center in Tucson, Arizona.

PREVIOUS: Cardinal calls all to pray Supreme Court will move to protect life in law