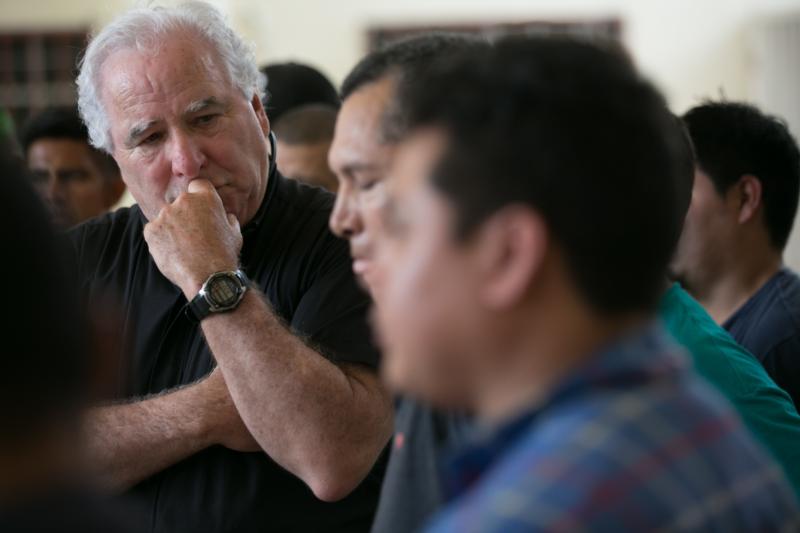 Father Robert Heinz of St. Norbert Church in Northbrook, Ill., listens to an emotional story from a man now living at a migrant shelter in Reynosa, Mexico, run by the Daughters of Charity of St. Vincent de Paul. Father Heinz visited the shelter as part of a July 11-13 immersion experience with Catholic Extension. (CNS photo/Catholic Extension)

CHICAGO (CNS) — Six Chicago area pastors joined Catholic Extension on a trip to the southwest border to learn about the challenges facing migrant families and to provide funds for various outreach ministries.

The July 11-13 trip to the Rio Grande Valley in Texas and Mexico allowed the priests to meet with people being served by Catholic-run centers and parishes.

Father Jack Wall, Catholic Extension president and the delegation’s leader, said afterward that Catholic ministries “on both sides of the border have been doing heroic work with immigrants and their families for many years, and we want more people to know about this important work.”

In San Benito, the delegation met numerous migrants, including a Honduran mother who said that she had been approached by criminals who threatened to kidnap her 8-year-old daughter and decided to head north for safety.

In Penitas, the priests met immigrant women and children at an outreach center that addresses health care, education, social services and evangelization.

The center, run by the Missionary Sisters of the Immaculate Heart of Mary, is connected with St. Anne Parish, which the sisters built in response to peoples’ desire for a worship space.

Sponsored by the Sisters of Divine Providence, La Posada Providence is regularly approached by immigration officials asking to shelter recently paroled immigrants and asylum-seekers, according to Catholic Extension.

Both programs received funding from Catholic Extension’s Family Reunification Fund, established in June in response to the separation of children from their parents as they entered the United States along the border with Mexico.

The trip included stops across the border in Mexico, where the priests visited two sites that aid migrants, including those who are seeking asylum in the United States and those who recently have been deported and those attempting to be reunited with family members.

“We wanted this group of priests to see and experience these sites firsthand so that they could share it with their parishioners back home and help put a face on this issue,” Boland said in a statement. “We also wanted to dedicate these funds as quickly as possible because our immigrant brothers and sisters and the people who serve them on the borders need our help.”

Other stops on the trip included the dedication of Sacred Heart Church in Hidalgo, Texas, located a short distance from wall marking the Texas-Mexico border. Catholic Extension provided $75,000 in funding for the new church.

Based in Chicago, Catholic Extension raises and distributes funds to support U.S. mission dioceses, many of which are rural, cover a large geographic area, and have limited personnel and pastoral resources.

NEXT: Archbishop Chaput among delegates tapped by pope for synod