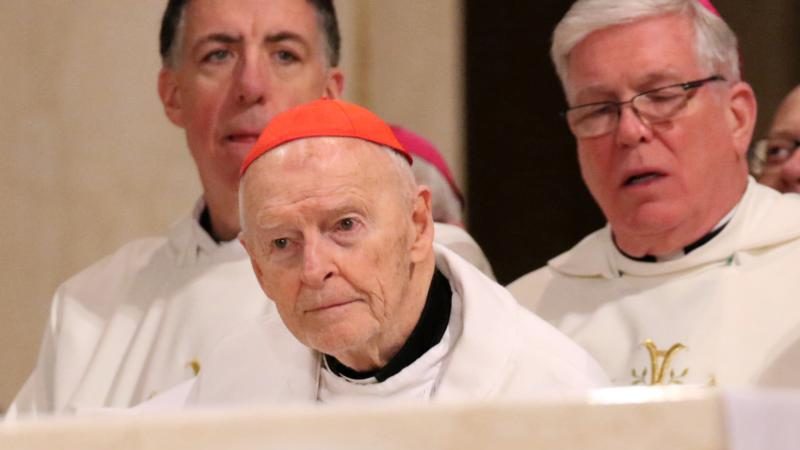 Cardinal Theodore E. McCarrick, retired archbishop of Washington, is seen during the opening Mass of the National Prayer Vigil for Life at the Basilica of the National Shrine of the Immaculate Conception in Washington Jan. 18. (CNS photo/Gregory A. Shemitz)

WASHINGTON (CNS) — Editorials in national Catholic publications have taken the U.S. Catholic Church to task for its failure to root out all forms of clergy sexual abuse in the light of allegations made by former seminarians against Cardinal Theodore E. McCarrick, retired archbishop of Washington.

Not long after those editorials were published, a new series of allegations were published in The New York Times by a man who is believed to have been the first baby then-Father McCarrick ever baptized when he was a New York priest.

“The Catholic Church cannot pretend to be shocked about the pattern of sexual abuse of adult seminarians” allegedly by Cardinal McCarrick, said a July 17 editorial by the editors of America magazine. “Many church leaders had received multiple notices of the cardinal’s behavior. Local dioceses had been told, the papal nuncio in Washington, D.C., had been told and, eventually, even Pope Benedict XVI had been told.”

“The church and its leaders should be ashamed of their failure” to call Cardinal McCarrick to account, the editorial added.

Noting that Cardinal McCarrick, now 88, had long been a friend of the magazine, it continued: “Nor should the media, including we in Catholic media … be absolved of responsibility for any failure to take these and other rumors and reports as seriously as was required. To demand accountability only of the hierarchy is itself hypocrisy.”

America added, “The church also cannot pretend that this is an isolated incident,” asserting that “in all likelihood, there are more reports still to come that will show this situation is worse than is now known.”

The New York Times, in an article published July 19, recounted the case of James, who told the newspaper of a pattern of abuse he said was begun by Cardinal McCarrick when the cleric was 39 and the boy was 11 and living with his family in New Jersey. The abusive relationship lasted nearly 20 years, according to James, who had asked that his last name not be used to protect a sibling.

As with earlier accounts of abuse allegations published by the Times, there was no kissing or hand-holding by Cardinal McCarrick — who called himself “Uncle Ted” to James, who filed a police report against the cardinal in the suburban Virginia county of Washington where James now lives.

Susan Gibbs, a spokeswoman for the cardinal, told The New York Times July 18 that he had not been notified of the accusation, so he could not respond. But she said Cardinal McCarrick was committed to following the process the church has put in place for abuse allegations.

The earlier Times article, published July 16, detailed the alleged abuse of two seminarians in the Diocese of Metuchen, New Jersey, by then-Bishop McCarrick in the 1980s that resulted in settlements to each man. The cardinal declined to comment to the Times on the story.

On June 20, Cardinal McCarrick said he would no longer exercise any public ministry “in obedience” to the Vatican after an allegation he abused a teenager in 1971 when he was serving as a priest of the Archdiocese of New York in 1971 was found “credible and substantiated.” The cardinal said he was shocked and saddened by the report but said he had no recollection of that episode of abuse.

In a July 18 editorial, the editorial board of OSV Newsweekly said, “The revelations regarding McCarrick will shed an uncomfortable but necessary light on an enabling culture.”

“Even the most loyal, ardent defenders of the church find themselves without words — speechless at how, 18 years after the crisis first reared its ugly head, the church has made such little progress in full disclosure and transparency,” it added. “The sexual abuse of seminarians and priests by a member of the Catholic hierarchy is immoral and despicable.”

OSV Newsweekly said, “We find that there was truth in some of the claims of the church’s harshest critics in 2002 — those who insisted that the urgent reforms to keep young people safe didn’t reach far enough to penetrate entrenched and toxic cultures of power, privilege, corruption, immorality and concealment.”

In 2002, the U.S. bishops approved their “Charter for the Protection of Children and Young People,” a comprehensive set of procedures for addressing allegations of sexual abuse of minors by Catholic clergy and other church workers. The charter also includes guidelines for reconciliation, healing, accountability and prevention of future acts of abuse.

“We need to acknowledge that those who are struggling with anger or frustration have good reason for those feelings,” the OSV Newsweekly editorial said. “There are no excuses to be made on the part of the church when it comes to clergy sexual abuse — whether by priests, bishops, or cardinals — and you should not feel compelled to offer any.

“The only way forward for the church is to acknowledge failure, and to call all of us, from the people in the pew through the upper ranks of the hierarchy, to repentance and conversion,” it continued. “We must continue to pray, and we must work for structural reforms to protect vulnerable adults in the church from those who would leverage their power for sexual gratification.”

“The cardinal’s downfall also shows the need for better, more transparent ways for responding to what may be just as widespread a problem within the church: sexual harassment of adults,” said a July 18 essay in Commonweal written by contributing writer Paul Moses.

“Cases involving adults — alleged ‘improprieties’ deemed serious enough for church officials to refer them to law enforcement at the time they were received — remain a matter of secrecy and speculation,” Moses wrote. “The wall of secrecy surrounding the harassment of priests and seminarians is particularly high, complicated by both canon and civil law.”

He added, “Secrecy drove the scandal of clergy sexual abuse of children, allowing serial abusers to be transferred from one parish to another instead of expelled from the priesthood. Catholic priests were no more likely than other men to abuse children, but an institutional cover-up of their offenses helped the problem multiply. The question is whether this will apply to sexual harassment of adults, which, as various lawsuits have shown, also emerges in the church, as it does in any large institution.”

Moses said, “There is a deeply sacramental theology to this relationship” between a bishop and his priests. “But is it meant to be used to stop a priest from calling for bishops to be held accountable for enabling crimes? The First Amendment rights for freedom of religious practice make it difficult to get an answer to that question in court.”

In other reaction to reports of abuse, Catholic Relief Services issued a statement July 28 about Cardinal McCarrick, who was a CRS board member following his retirement as Washington’s archbishop.

“CRS recently completed a thorough global review, asking our staff to report any knowledge of previously unreported or unresolved allegations of misconduct. There were a few issues that needed attention and have been addressed, but none of them were related to program visits,” the statement said. “CRS protocol does not allow anyone — visitors or CRS employees — to be alone with children and program participants.”