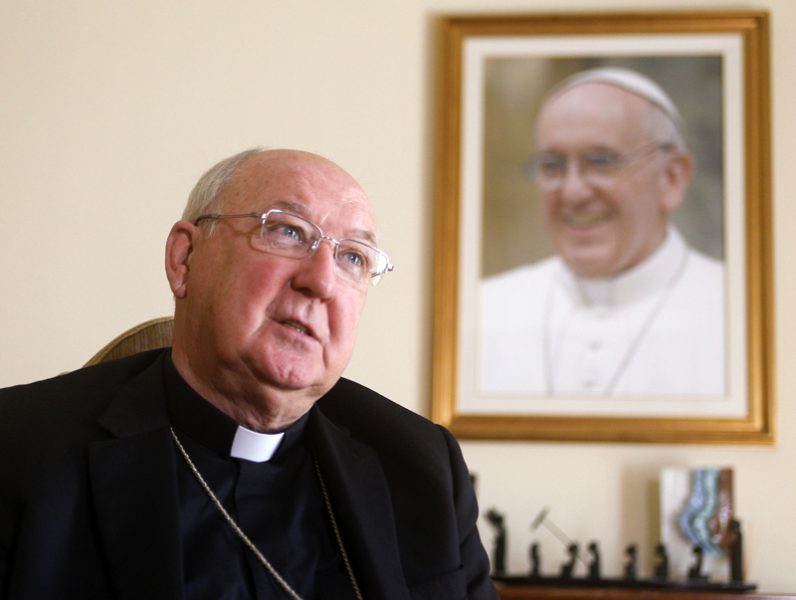 Cardinal Kevin J. Farrell, prefect of the Dicastery for Laity, the Family and Life, is pictured during a July 24 interview in his Vatican office. Cardinal Farrell said that in the six years he worked with Cardinal Theodore E. McCarrick, retired archbishop of Washington, he never heard allegations of sexual abuse or harassment. Cardinal McCarrick was ordered to withdraw from public ministry in June after an allegation was deemed credible. (CNS photo/Robert Duncan)

VATICAN CITY (CNS) — Cardinal Kevin J. Farrell, head of the Vatican office for laity and family, said he was “shocked” when he heard allegations of years of sexual abuse and harassment by Cardinal Theodore E. McCarrick, the man who ordained him a bishop and whom he served as an auxiliary bishop for six years.

“I was shocked, overwhelmed; I never heard any of this before in the six years I was there with him,” Cardinal Farrell told Catholic News Service July 24.

In late June, Cardinal McCarrick, the 88-year-old retired archbishop of Washington, said he would no longer exercise any public ministry “in obedience” to the Vatican after an allegation he abused a teenager 47 years ago in the Archdiocese of New York was found credible. The cardinal has said he is innocent.

The Archdiocese of Washington said Cardinal Pietro Parolin, Vatican secretary of state, “at the direction of our Holy Father, Pope Francis, has instructed Cardinal McCarrick that he is to refrain from any public ministry or activity until a definite decision is made.”

Since then, at least one other person has come forward claiming Cardinal McCarrick sexually abused him as a child, and several former seminarians have claimed that the cardinal would invite groups of them to a beach house and insist individual members of the group share a bed with him.

“I worked in the chancery in Washington and never, no indication, none whatsoever,” Cardinal Farrell said. “Nobody ever talked to me about this and I was involved, heavily involved,” in investigating and confronting the problem of clerical sexual abuse for the Archdiocese of Washington, especially after the U.S. bishops approved their charter for child protection in 2002.

Cardinal Donald W. Wuerl of Washington said in late June that he had requested a review of all the Archdiocese of Washington’s records. “Based on that review, I can report that no claim — credible or otherwise — has been made against Cardinal McCarrick during his time here in Washington.”

NEXT: Chilean cardinal called to testify for suspected abuse cover-up