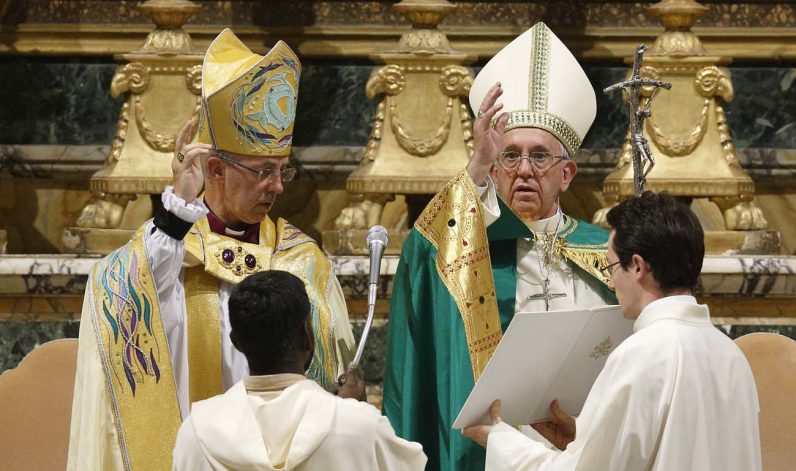 Anglican Archbishop Justin Welby of Canterbury, England, head of the Church of England, and Pope Francis deliver a blessing as they conclude a vespers service at the Church of St. Gregory in Rome Oct. 5, 2016. The Anglican-Roman Catholic International Commission July 2 published its first document in 13 years on how both institutions can learn from each other in the exercise of ecclesial authority locally, regionally and globally. (CNS photo/Paul Haring)

VATICAN CITY (CNS) — A new document driven by a fresh approach taken by the official Anglican-Roman Catholic dialogue commission reflects a major development in ecumenism where difference is not cause for suspicion or reproach, but is used as an enriching opportunity for mutual listening, learning and conversion.

This notable change is seen in the first agreed statement from the newest and third phase of the Anglican-Roman Catholic International Commission, known as ARCIC III. The statement, “Walking Together on the Way: Learning to Be the Church — Local, Regional, Universal,” was released to the public July 2 after seven years of joint meetings and consultations.

In their introduction, the Catholic co-chairman, Archbishop Bernard Longley of Birmingham, England, and the Anglican co-chairman, Anglican Archbishop David Moxon, the archbishop of Canterbury’s representative in Rome, wrote that the document sought to develop the issues of authority and ecclesial communion “in a new way.”

Understanding how the Catholic Church and the Anglican Communion structure authority and exercise authority in communion on the local, regional and global levels are key for understanding how each body discerns its teaching and practices on critical issues in ethics and moral theology.

It is also key for understanding and addressing questions, debates or divisions experienced internally within the churches. Which means the document also seeks to inform, enrich and help not just the Catholic Church and the Anglican Communion on an ecumenical level, but also in dealing with their own internal debates and tensions.

This first agreed statement from ARCIC III “represents a significant methodological and substantive step-forward for Anglican–Roman Catholic formal ecumenism,” and it is also “in service of ecclesial reform within both Anglican tradition and Catholic tradition,” Paul Murray, professor of theology at Durham University in the United Kingdom and Catholic member of ARCIC, told Catholic News Service.

The commission members representing the Catholic Church and the Anglican Communion focus on their “respective felt difficulties within their own ecclesial cultures, processes, structures and associated ecclesiologies, and ask how these difficulties might be helped by a process of receptive learning from relative strengths in the theology and practice of the other communion,” he said July 2.

This method has its roots in how St. John Paul II saw dialogue as not simply an exchange of ideas or a removal of obstacles, but an “exchange of gifts.”

“This implies more than ceasing to judge the other tradition as mistaken or problematic but discerning what is graced” and can be “gratefully received,” the document said in its introduction.

The document marks the start of a new phase that emerged after the official Anglican-Roman Catholic dialogue experienced a six-year hiatus.

Since ARCIC II finished its work in 2005, the Anglican Communion began experiencing strong internal tensions over the ordination of women as priests and bishops, the blessing of gay unions and the ordination of openly gay clergy. Differing positions on those moral issues also created a sense that Anglicans and Roman Catholics were growing farther apart rather than approaching unity.

As such, now-retired Pope Benedict XVI and Archbishop Rowan Williams, the now-former archbishop of Canterbury, England, and head of the Church of England, had identified two critical areas for ecumenical exploration in their 2006 common declaration: “the emerging ecclesiological and ethical factors making that journey more difficult and arduous.”

The two leaders authorized the new phase of the dialogue at their meeting at the Vatican in November 2009, just one month after Pope Benedict announced his decision to erect personal ordinariates for allowing former Anglicans to enter full communion with the Catholic Church while preserving elements of their distinctive Anglican heritage, including a certain amount of governing by consensus.

Rather than put the brakes on dialogue, it gave both sides a chance to get a different look at the heart of lingering questions about authority and how decisions on moral issues are made. The two leaders asked ARCIC, which held the first of the new round of meetings in 2011, to focus on the church as communion, local, regional and universal, and how, in communion, the local, regional and universal church come to discern “right ethical teaching.”

At 34,000 words, the resulting document represents a detailed exploration of what structures, channels or practices exist that seek to give all the baptized — lay, religious, clergy, bishops — a voice or a role in how decisions are made.

While the commission has left the question of “the discernment of right ethical teaching” for its next document, “this exploration of the nature of communion has become vital in the light of current debates within the churches,” the document said.

In his five years as pope, Pope Francis has already shown several major ways he is seeking to eradicate “clericalism” and expand ways the voice of “the people of God” gets heard at the top, for example, with presynod questionnaires and encounters; he is also shifting more weight from the Roman Curia to episcopal conferences by returning oversight of liturgical translations to them and citing their documents in his teachings.

Current issues — not detailed in the document but in the forefront of debate in the Catholic Church — that depend on the right use of authority and legitimate diversity include policies on Communion for Protestant spouses of Catholics and guidelines for the interpretation of “Amoris Laetitia,” Pope Francis’ apostolic exhortation on the family.

In a Catholic commentary published on the website of the Pontifical Council for Promoting Christian Unity along with the document, Father Ormond Rush, an Australian theologian, highlighted a number of ways the document could contribute to “Catholic self-understanding and practice.”

“There are many parallels between the receptive learning possibilities for the Roman Catholic Church proposed by” the latest ARCIC document “and Pope Francis’s vision for renewal and reform according to the Second Vatican Council. In other words, the Anglican tradition has much to offer in making the Council a reality.”

A number of elements in the Anglican tradition — with its added emphasis on the mission of the laity, the power of the regional and the benefits of debate as something to be welcomed, not feared — “can assist the Roman Catholic Church to be more faithful to the vision of the Second Vatican Council,” he wrote.

NEXT: Catholics, Anglicans complete work on structures of authority, communion