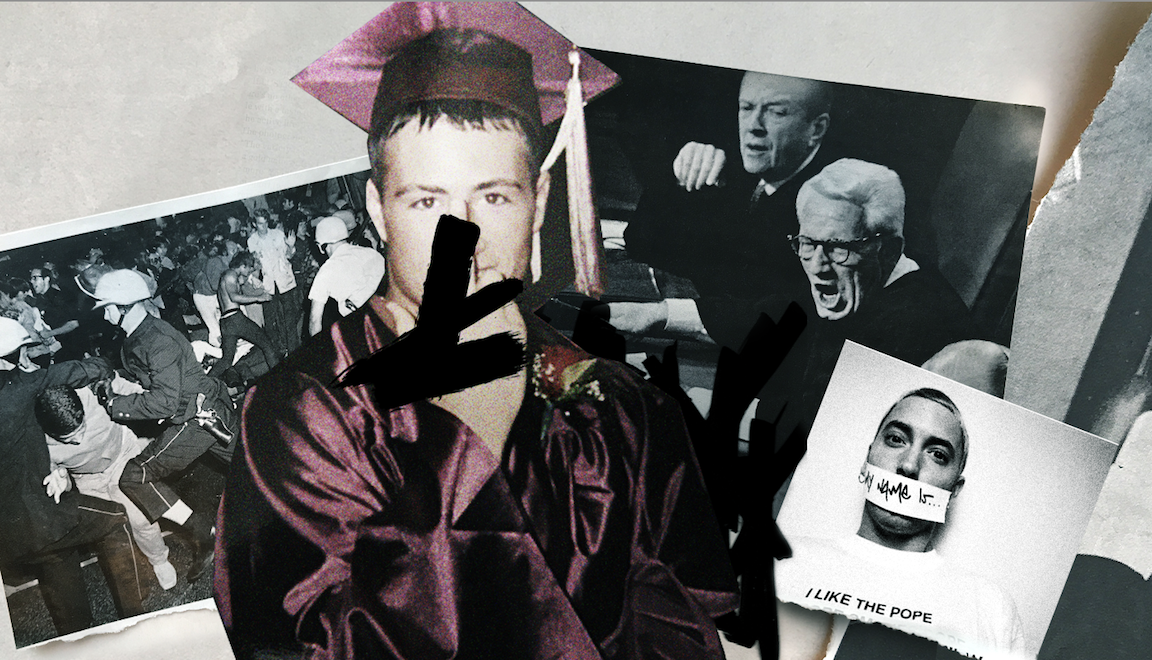 Out of 136 kids in my high school class, I was academically ranked 134. My best friend was 135 and we never knew who 136 was but he must have died during the school year if he got worse grades than we did.

Growing up I was a sports junkie. I wrestled year-round and was on a traveling baseball team. I was a straight “A” student with big dreams, but things changed when my dad’s drug addiction started. He began to fade out of my life and since he was busy getting his hands on pain prescription pills, and eventually heroine, all I had as a guide for life was my post-pubescent desires.

I quickly became a Shady wannabe doing outrageous things in class just for a laugh, going so far as to call one of the staff Mr. “fill-in-the-obscenity” and threatening to fight my English teacher.

The cops pulled me out of class for that last one.

I went after anything that felt good. At 16 I was partying, chasing girls, smoking pot — you name it, I probably did it. Nothing seemed to satisfy me and my life started to become very empty, very fast. Two of my friends committed suicide. It didn’t take long for me to hit rock-bottom.

One night of mailbox smashing — drinking and driving around as “bad country kids” do — led to a cop pulling me over. Well, he tried to pull me over.

Instead of stopping, I turned off my headlights and gunned it down a dirt road, leading a high speed chase for five miles before I almost ran into a house. With his gun to my head, the cop questioned if I was a drug lord running for his life. The truth was that I was just some bored kid looking for a thrill.

It was while watching my friends get put in handcuffs that I knew I needed a life change.

The chase happened just a few weeks before I would have been considered a legal adult, which would have resulted in a year in prison. Instead, as a minor, I received six months probation.

Looking for a Shawshank escape from reality, I dropped out of school, moved to Denver, Colorado, and sold coupon books door-to-door for a marketing company (my lifelong dream …).

That lasted a good long month before I went home.

I was still determined to change my life. My high school advised me to officially drop out and enroll in Alternative Education. I finished high school with classes like “Literature through Movies” (our class explored the great and diverse world of English literature with movies like “Star Wars”). I also picked up a job at a warehouse. My friends weren’t into the change in lifestyle I wanted, so I dropped away from them. I wanted something better out of life than the “good times all the time” thing I’d been doing for so long.

I enrolled in community college, worked 40+ hours a week, worked out a ton, and finally had some purpose in my life. People were trying to copy me, something unheard of for the kid who was ranked 134 in his high school class. Things were finally going well.

Until a friend asked me to see a movie…

It was “The Passion of the Christ.” I’d grown up Catholic and thought, “Why the heck not?” It also meant eating a bucket of popcorn and flirting with girls outside the theatre, so I went.

As the movie played in front of me, I realize I’d never heard about Jesus like that before, like a real person. My heart felt like it was exploding as I watched. I was overwhelmed by the love of God. Something was happening to me and I didn’t know how to explain it.

After the movie my friend asked me to pray with him, which was about as weird for me at that period in my life as if he had asked me to make out with him.

At the beginning of that prayer in his car, sitting in the movie theatre parking lot, all I could manage was a quick sign of the cross.

That night was the start of this whole faith thing for me: a roundhouse kick to the life I thought was going well. Turns out?

It could be better.

And it has been.

Jacob King is director of Anthem, the youth and young adult ministry of the Archdiocese of Philadelphia.

NEXT: Church must learn new ways, knowing ‘change is painful’