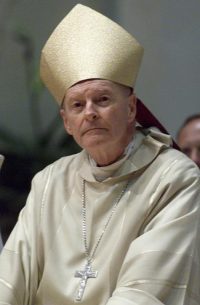 Archbishop McCarrick is pictured in a 2001 photo in Washington in Washington. (CNS photo/Brendan McDermid, Reuters)

WASHINGTON (CNS) — With retired Archbishop Theodore E. McCarrick’s resignation July 28 from the College of Cardinals, more of his fellow bishops are commenting on the scandal that has enveloped the former archbishop of Washington and its impact on the larger church.

Archbishop Charles J. Chaput of Philadelphia, in an Aug. 1 posting on his Facebook page, noted how Cardinal Daniel N. DiNardo of Galveston-Houston, president of the U.S. bishops, had issued a statement that day outlining the steps the bishops would take “in order to address the failures of the church in protecting God’s sons and daughters” from abuse.

“I join Cardinal DiNardo in expressing my deep regret and sorrow for the pain and harm caused by any failures to protect God’s children,” Archbishop Chaput said.

“In light of this national church news, I want to reassure you today, as forcefully as I can, that the Archdiocese of Philadelphia has a zero-tolerance policy for clergy, lay employees, and volunteers who engage in the abuse of children,” he said. “We take immediate action when an allegation is made and we cooperate promptly and fully with law enforcement. Research and experience have shown that sexual abuse plagues every corner of society from sports and public institutions, to the entertainment industry, and the political arena.

The allegations against Archbishop McCarrick are “a further painful blow for all of God’s people,” said a July 30 letter by Archbishop Paul S. Coakley of Oklahoma City to Catholics in his archdiocese. “It is even more egregious when these crimes are perpetrated by members of the clergy and those in positions of trust. Those are among the most bitter fruits of sin.”

Archbishop Coakley asked, “How could these allegations have remained under the radar for so long? It seems that many heard rumors of his alleged criminal and sinful behavior.”

While the “Charter for the Protection of Children and Young People,” adopted by the bishops in 2002 when the clergy sex abuse crisis roared into public consciousness, is “a step in the right direction,” Archbishop Coakley said, “part of the problem is a gap in the charter itself.”

He added, “This gap has contributed to the erosion of trust and confidence in episcopal leadership among priests, deacons and the lay faithful. Repairing this gap by creating consistent standards and procedures for all, including bishops, will go a long way toward restoring that trust,” although he acknowledged “they will not be enough,” stressing “humble repentance and continuing conversation for all of us who are in positions of leadership in God’s church.”

The archbishop also said the “scourge” of sexual abuse is one of the “bitter fruits” of the sexual revolution that “continue to wreak havoc on human society, the family and the church.” Blessed Paul VI in “Humanae Vitae” 50 years ago, he noted, warned of a “general lowering of morality in society.”

In an Aug. 1 message on his blog, Archbishop Paul D. Etienne of Anchorage, Alaska, said: “Many people — priests, laity and hierarchy — are wondering how this or any bishop might rise to the rank of the episcopacy let alone to become a cardinal in the church.”

“Most regular, church-attending Catholics still trust their priests, who minister and serve the people of God faithfully,” he added. “The same can no longer be said of bishops. We have lost the trust of many of our priests and people.”

Archbishop Etienne offered a seven-point plan to restore trust, including having an ad hoc committee of the U.S. bishops to write a protocol to have the charter apply to bishops and appointing a separate review board to field abuse accusations against bishops and make recommendations to the Vatican — and with the authority to make its recommendations public if no action has been taken after 60 days.

“At its core, we are facing a spiritual crisis, and these times call us to renew our life in and our witness to Jesus Christ,” Archbishop Etienne said.

“We must remember that when it seems like the church has failed us, it is the fallible human beings within the church, and even some leading the church, who have failed; not the church itself,” said an Aug. 1 statement by Bishop Michael F. Burbidge of Arlington, Virginia, which adjoins the Archdiocese of Washington.

“It is the Lord who leads, guides and protects his people and church,” Bishop Burbidge added. “It is only when we lose sight of him that we stumble.”

Bishop Burbidge said, “For 16 years, dioceses around the country have implemented unprecedented protocols to encourage reporting of allegations and suspicions of sexual abuse by priests and deacons, as well as to investigate such accusations thoroughly, independently and transparently. Clearly, these procedures and policies need to be reflected in the conduct of bishops as well as how we relate to one another. We all must be held accountable for our actions — bishops are no exception.”

Contributing to this story was Steve Larkin.

PREVIOUS: University, institute to be hub for causes of African-American Catholics

NEXT: New Pew survey looks at why Americans go or don’t go to church services