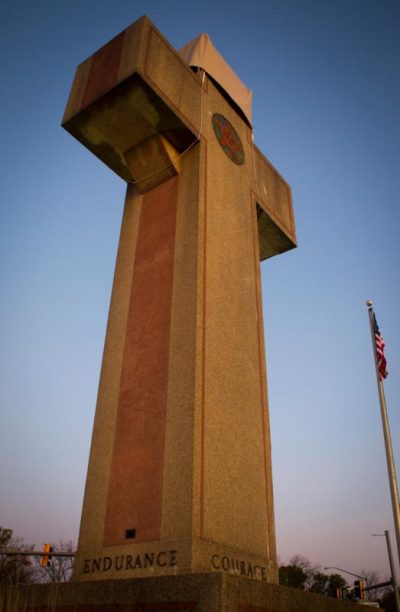 A cross-shaped monument, a landmark in Bladensburg, Md., is pictured in this 2017 photo. It was constructed in 1925 as a memorial to 49 men from Prince George’s County, Md., lost in World War I. The Thomas More Law Center, a national public interest law firm based in Ann Arbor, Mich., filed a brief July 27 in the U.S. Supreme Court in what it called “a last-ditch effort” to save the 40-foot cross. (CNS photo/Chaz Muth)

BLADENSBURG, Md. (CNS) — A national public interest law firm has filed a brief with the U.S. Supreme Court in “a last-ditch effort” to save a 40-foot-tall cross memorializing soldiers who died in World War I that sits at a busy intersection in the Washington suburb of Bladensburg.

Last October, the 4th U.S. Circuit Court of Appeals based in Richmond, Virginia, ruled 2-1 that the 93-year-old monument is unconstitutional and must be removed or destroyed. “(It) has the primary effect of endorsing religion and excessively entangles the government in religion.”

“The use of the cross reflected the custom in Europe during World War I,” the Thomas More Law Center of Ann Arbor, Michigan, said in a July 30 statement. It filed its brief with the U.S. Supreme Court July 27.

In Europe “the cross became the principal grave marker in cemeteries where soldiers were buried, as described in … ‘In Flanders Fields,’ a famous poem of the time whose opening lines begin, ‘In Flanders fields the poppies blow, Between the crosses, row on row,'” the law center said.

The Maryland-National Capital Park and Planning Commission acquired the memorial from the American Legion in 1961. It is located at Maryland Route 450 and U.S. Route 1. The state agency has spent about $117,000 to maintain and repair the memorial and has earmarked $100,000 for renovations.

“We cannot change the stories of the dead to appease the all-too-easily-offended living,” the Thomas More Law Center said in its brief. “Any harm respondents feel they incur due to seeing the shape of a cross when they happen to drive past the Bladensburg memorial, pales in comparison to the real and lasting harm that destroying such memorials will cause to this country as a whole, to veterans’ families, and to the memories of the men and women who are honored by them.”

The American Humanist Association, a Washington-based group that represents atheists and others, filed suit against the memorial because it is in the shape of a cross. It argued that having a religious symbol on government property violates the establishment clause of the First Amendment.

A District Court judge in 2015 said the monument did not have to be removed from public land, saying that although its Latin cross design “is undeniably a religious symbol,” it is “not a governmental endorsement of religion.”

Hearing the appeal of that decision was a three-judge panel of the 4th Circuit made up of Chief Judge Roger L. Gregory and Judges Stephanie D. Thacker and James A. Wynn Jr.

Writing the majority opinion, Thacker said the lower court determined that a cross memorial maintained by local government and located on public property “does not run afoul of the establishment clause because the cross has a secular purpose, … neither advances nor inhibits religion and it does not have the primary effect of endorsing religion. We disagree.”

“The Latin cross is the core symbol of Christianity,” the judge said. “And here it is 40 feet tall, prominently displayed in the center of one of the busiest intersections in Prince George’s County, Maryland; and maintained with thousands of dollars in government funds. Therefore, we hold that the purported war memorial breaches ‘the wall of separation between church and state.”

In his dissent, Gregory said the Peace Cross “has always served as a war memorial” and “has been adorned with secular elements for its entire history,” and sits near other memorials in Veterans Memorial Park. “(Its) predominant use has been for Memorial Day celebrations,” he wrote.

The government is not required by the First Amendment to “purge from the public sphere any reference to religion,” he said.

NEXT: Through ministry of accompaniment, Oregon parish helps asylum seeker