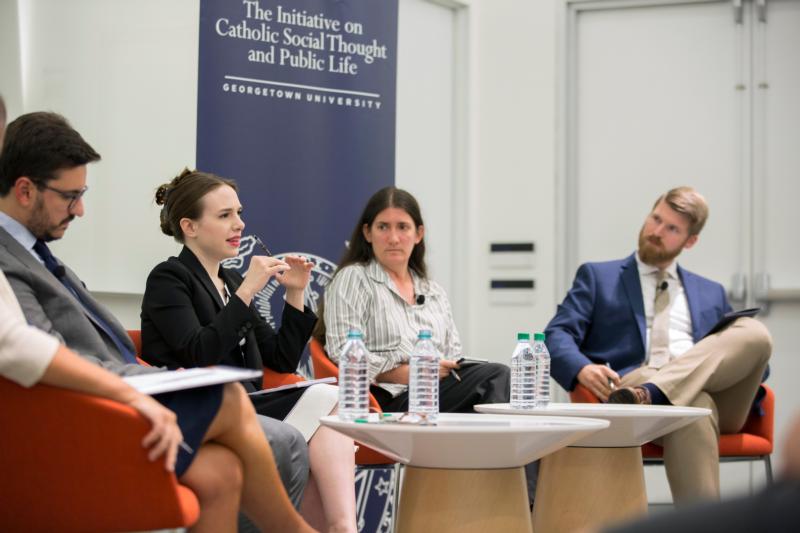 Elizabeth Bruenig, a Washington Post opinion columnist, speaks during a Sept. 17 “Salt and Light Gathering” hosted by Georgetown University’s Initiative on Catholic Social Thought and Public Life. The other panelists are Joshua McElwee, a Vatican correspondent for National Catholic Reporter; Eve Tushnet, an author and editor; and Jonathan Lewis, the assistant secretary for pastoral ministry for the Archdiocese of Washington. (CNS photo/Jaclyn Lippelmann, Catholic Standard)

WASHINGTON (CNS) — Pope Francis’ pontificate has been one of reform but his response to the current abuse crisis is “a moment of make or break” for him, a speaker said Sept. 17 at a “Salt and Light Gathering” at Georgetown University in Washington.

Joshua McElwee, a Vatican correspondent for the National Catholic Reporter and co-editor of “A Pope Francis Lexicon,” said he believes the biggest issue at stake is the lack of transparency surrounding what happens to bishops, superiors or other people of power when they do not report people who are abusing others.

“It is weird to me that the people of God would not be informed about issues like that,” he said. “The pope has the opportunity to address this crisis, to do something new, take action, or leave many of us wondering, ‘What has happened and why did we not address this head-on?'”

McElwee was one of four young Catholic professionals who discussed the church’s abuse crisis and the way forward at the gathering hosted by the university’s Initiative on Catholic Social Thought and Public Life.

The other panelists were Elizabeth Bruenig, a Washington Post opinion columnist and editor; Jonathan Lewis, assistant secretary for pastoral ministry for the Archdiocese of Washington and an auditor at the upcoming Vatican Synod on Young People, the Faith and Vocational Discernment; and Eve Tushnet, editor of “Christ’s Body, Christ’s Wounds: Staying Catholic When You’ve Been Hurt in the Church.”

McElwee, who has lived in Rome for four years, is waiting alongside everyone else to see what Pope Francis is going to ask presidents of episcopal conferences around the world to do now that he has called them all to a meeting in February about abuse prevention.

Bruenig, a convert to Catholicism who has been doing investigative reporting on the church, said since the crisis began to unfold, she has received many messages from Catholics who have told her how much it has destroyed their faith. When asked what she thinks the church could do to start to rebuild some of those people’s trust, she said she thinks the church hierarchy needs to follow Catholicism’s example of radical self-sacrifice.

The best thing church authorities who have covered up abuse “could do right now to have any hope of regaining trust is to sacrifice themselves,” she said. “They need to turn over their documents and resign”

If church leaders are going to leave it to outside investigators to uncover all of the information about abuse, it is going to damage the trust of the faithful even more, because it would show that “no matter how bad things get; how much of an opportunity we give them to reconcile themselves — they are going to go kicking and screaming,” Bruenig said.

Lewis said learning about allegations of sexual abuse of a minor and of seminarians by Archbishop Theodore E. McCarrick, former cardinal-archbishop of Washington, has taught him and others that “it is not acceptable to give Jesus everything except a little corner. … It is not sufficient to give most of ourselves to God.”

In light of this lesson, Lewis said, now is an appropriate time to turn toward the Synod of Bishops on “young people, faith and vocational discernment,” because it is important to look forward 50 years and ask, “What do we want the church to be about?”

“There has never been a more important time for the church to look directly at young people and listen first,” he said. “I don’t think there has ever been a synod gathering that has listened more to the experience of people than this one.”

Lewis also emphasized the importance of co-responsibility for the life of the church between lay Catholics and clergy in trying to curb clericalism. McElwee said he did not believe co-responsibility could truly exist, because in the church, all power rests with the bishops. Tushnet argued that laity do have power in their ability to speak up about reform they wish for their bishops to make.

Rather than an issue of authoritarianism, Bruenig said she believes the crisis is an issue of “decadence and weakness” among bishops who “don’t have any internal discipline” to do what is right.

For bishops who are unable to exhibit strong leadership, “we need to replace them with people who are capable and strong enough to follow Christ, then the laity will follow,” she said.

Lewis pointed out that Catholicism, and all religions, are rooted in the contemporary culture that they are part of, and said he believes Pope Francis was prophetic early on in his papacy when he said, “I want a church that is poor and for the poor.”

The church’s weaknesses, such as decadence or polarization, are “not coming from nowhere — they are coming from the world in which we live,” said Lewis.

Because “no one is a bigger culture-maker than young laypeople,” Lewis said, it is time for “an examination of conscience for us” and to ask, “Are we going to continue along in an assembly line of modernism?”

While it is easy for many people, especially in a transient city like Washington, to be anonymous and slide in the back pew in church, Lewis said this crisis shows now more than ever the importance of personal witness in the life of the church.

Daniels said in this culture, religion often becomes like another good to consume, and “when it becomes unsatisfying, when we see there is sin in the church, it is tempting to leave our faith.” She asked the panelists what nourished their faith in the midst of crisis.

Bruenig cited the Gospel where Jesus asks Peter if he also is going to turn away from him, and Peter responds, “Lord, to whom shall I go?” Likewise, she said she wouldn’t dream of leaving the church.

“I am trapped in a church where a lot of things are going seriously wrong. I am not unhappy to be here; I am unhappy about what is being done here,” she said, noting that what is within her power to do is to “throw a fit about it.” She encouraged others to do the same.

Tushnet, whose book is an anthology of stories by people who were hurt by the church, noted the importance of rallying around survivors of abuse rather than attempting to protect the public image of the church.

For many people, remaining in or returning to the church after being hurt in some way is the result of meeting “people who were able to reconnect them to an honest and true image of Christ,” said Tushnet.

It is particularly powerful if priests are able to do this, because “one of the biggest betrayals for a lot of people is not actually the initial harm, but the fact everyone rallies around the church as an institution rather than rallying around them,” said Tushnet.

It is also important to emphasize that Catholics who have been hurt by the church are a part of the body of Christ, and their experience does not separate them from the church, but rather connects them to people who could be powerful supporters, like saints who have experienced abuse, and like Jesus who experienced sexual humiliation when he was stripped of his clothes on the way to the cross, said Tushnet.

Tushnet said she is hesitant to ever answer the question of why someone should stay in the church, because “I think the way that people answer that question for those around them is by living a life of Catholic faith and service.”

“What people are looking for is the idea that you can touch Jesus more intimately nowhere else than in (the) Catholic Church,” she said. “When they are asking where to go, they are asking, ‘Where can I be closest to Jesus?’ I don’t think I have other options for that.”

NEXT: Attending Mass on Sunday night becoming new tradition for many Catholics