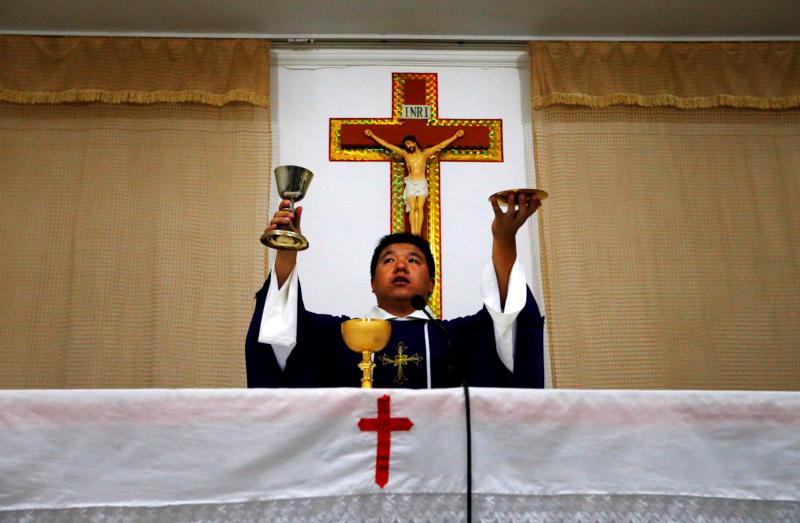 A priest celebrates Mass in 2012 in a makeshift chapel in a village near Beijing. For the first time in decades, all of the Catholic bishops in China are in full communion with the pope, the Vatican announced Sept. 22. (CNS photo/Reuters)

VILNIUS, Lithuania (CNS) — For the first time in decades, all of the Catholic bishops in China are in full communion with the pope, the Vatican announced.

Pope Francis lifted the excommunications or irregular status of seven bishops who had been ordained with government approval, but not the Vatican’s consent, the Vatican announced Sept. 22. A few hours earlier, representatives of the Vatican and the Chinese government signed what they described as a “provisional agreement” on the appointment of bishops.

“With a view to sustaining the proclamation of the Gospel in China, the Holy Father Pope Francis has decided to readmit to full ecclesial communion the remaining ‘official’ bishops ordained without pontifical mandate,” the Vatican said, listing their names.

The pope also included in the list Bishop Anthony Tu Shihua, who, before dying Jan. 4, 2017, “had expressed the desire to be reconciled with the Apostolic See,” the Vatican said.

Regularizing the bishops’ status, the Vatican said, Pope Francis hopes “a new process may begin that will allow the wounds of the past to be overcome, leading to the full communion of all Chinese Catholics,” some of whom steadfastly have refused to participate in activities or parishes under the leadership of bishops not recognized by Rome.

In recent years, most bishops chosen by the government-related Chinese Catholic Patriotic Association have sought and received Vatican recognition before their ordinations.

Cardinal Pietro Parolin, Vatican secretary of state, said in a statement that “the objective of the Holy See is a pastoral one: the Holy See intends just to create the condition, or to help to create the condition, of a greater freedom, autonomy and organization, in order that the Catholic Church can dedicate itself to the mission of announcing the Gospel and also to contribute to the well-being and to the spiritual and material prosperity and harmony of the country, of every person and of the world as a whole.”

“What is required now is unity, trust and a new impetus,” Cardinal Parolin said in a video message recorded before he left Rome to join the pope in Vilnius. “To the Catholic community in China — the bishops, priests, religious and faithful — the pope entrusts, above all, the commitment to make concrete fraternal gestures of reconciliation among themselves, and so to overcome past misunderstandings, past tensions, even the recent ones.”

The nomination and assignment of bishops has been a key sticking point in Vatican-Chinese relations for decades; the Catholic Church has insisted that bishops be appointed by the pope and the Chinese government has maintained that would amount to foreign interference in China’s internal affairs.

Vatican officials always have said that giving up full control over the nomination of bishops would not be what it hopes for, but could be a good first step toward ensuring greater freedom and security for the Catholic community there.

The Vatican announcement said the agreement was signed Sept. 22 in Beijing by Msgr. Antoine Camilleri, undersecretary for foreign relations in the Vatican Secretariat of State, and Wang Chao, Chinese deputy foreign minister.

The provisional agreement, the Vatican said, “is the fruit of a gradual and reciprocal rapprochement, has been agreed following a long process of careful negotiation and foresees the possibility of periodic reviews of its application. It concerns the nomination of bishops, a question of great importance for the life of the church, and creates the conditions for greater collaboration at the bilateral level.”

“The shared hope,” the statement said, “is that this agreement may favor a fruitful and forward-looking process of institutional dialogue and may contribute positively to the life of the Catholic Church in China, to the common good of the Chinese people and to peace in the world.”

The Vatican did not release the text of the agreement nor provide details about what it entailed.

News reports in mid-September, like earlier in the year, said the provisional agreement would outline precise procedures for ensuring Catholic bishops are elected by the Catholic community in China and approved by the pope before their ordinations and installations.

Media reports in the days before the announcement said future candidates for the office of bishop will be chosen at the diocesan level through a democratic election system, and the results of the elections will be sent to Beijing for government authorities to examine. The government would then submit a name via diplomatic channels to the Holy See.

The Holy See will carry out its own investigation of the candidate before the pope either approves or exercises his veto, according to the Jesuit-run America magazine. If the pope approves the candidate, the process will continue. If not, “both sides will engage in a dialogue, and Beijing would eventually be expected to submit the name of another candidate.”

Cardinal Joseph Zen, the 76-year-old retired archbishop of Hong Kong, has been one of the rumored agreement’s strongest critics.

In an interview with the Reuters news agency in Hong Kong Sept. 20, Cardinal Zen said Cardinal Parolin should resign.

“I don’t think he has faith. He is just a good diplomat in a very secular, mundane meaning,” Cardinal Zen told Reuters. “They’re giving the flock into the mouths of the wolves. It’s an incredible betrayal.”

Cardinal Parolin, meanwhile, told reporters Sept. 20 the Vatican is “convinced that this is a step forward. We are not so naive as to think that from now on everything is going to go well, but it seems to us that this is the right direction.”

Although Greg Burke, director of the Vatican press office, said the agreement is pastoral, not political, it is seen as a step in the long efforts to re-establish full diplomatic relations between the Vatican and China. The two have not had formal diplomatic ties since shortly after China’s 1949 communist revolution.

NEXT: God is patient, even with failures, pope tells young Lithuanians