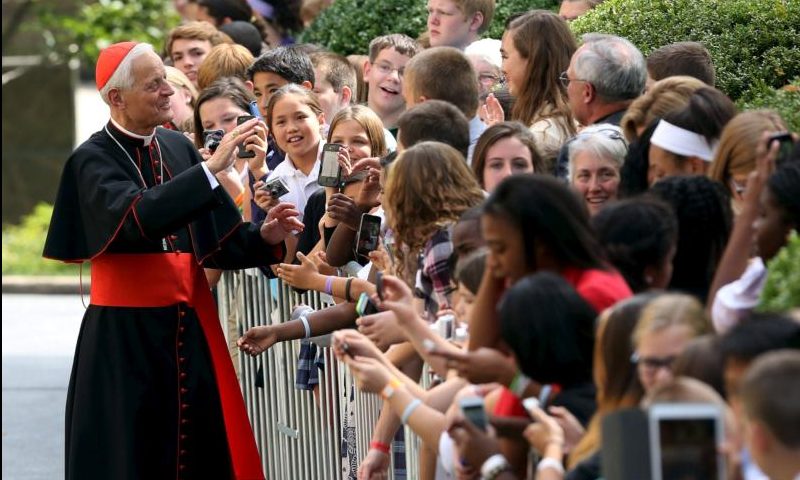 Washington Cardinal Donald W. Wuerl greets people during Pope Francis’ 2015 visit to the United States. The pope has accepted the resignation of Cardinal Wuerl as archbishop of Washington but did not name a successor. (CNS photo/Gary Cameron, Reuters)

WASHINGTON (CNS) — Cardinal Donald W. Wuerl, whose resignation as archbishop of Washington was accepted Oct. 12 by Pope Francis, was a high-profile figure in the U.S. church well before his 2006 appointment as archbishop of the nation’s capital.

Bishop of his native Diocese of Pittsburgh for 18 years before being appointed to Washington, Cardinal Wuerl , now 77, first made national headlines with his appointment in December 1985 as auxiliary bishop of Seattle, which was then led by Archbishop Raymond Hunthausen.

Archbishop Hunthausen was popular in Seattle, and not just among Catholics. When then-Bishop Wuerl was assigned, he got a cold reception; his ordination as auxiliary bishop took place in Rome and was not open to the public.

At that point, it seemed Bishop Wuerl was the only person in Seattle who knew he had been given “special faculties” over certain areas of archdiocesan life — including liturgy, moral issues and priestly formation.

It wasn’t until nine months after his appointment by St. John Paul II that Archbishop Hunthausen announced Bishop Wuerl had been given “complete and final decision-making authority” in those areas. The Vatican raised concerns about the archbishop’s approach to several areas of archdiocesan life, including the marriage tribunal and ministry to homosexuals.

The Vatican action drew criticism from Catholics in Seattle and throughout the United States. A Vatican-appointed commission of U.S. bishops assessed the situation and resolved the controversy, recommending the Vatican restore Archbishop Hunthausen’s powers and appoint a coadjutor bishop with the right of succession. Coadjutor Archbishop Thomas J. Murphy was named May 1987, and Bishop Wuerl’s Seattle assignment ended. He was later named bishop of Pittsburgh.

When then-Bishop Wuerl was installed as bishop of Pittsburgh in 1988, Archbishop Hunthausen attended.

Early in his episcopal ministry in Pittsburgh, Cardinal Wuerl had to deal with clergy sex abuse.

“This is a moment of intense pain and sadness for all priests, religious and laity of the church of Pittsburgh,” Cardinal Wuerl said in a statement at the time. “It is a time of heartache for myself, together with many families and individuals within our diocese and the wider local community.”

A fourth priest facing abuse allegations, Father Anthony Cipolla, actually won a brief victory in 1993 at the Vatican’s Supreme Tribunal of the Apostolic Signature when it reversed Cardinal Wuerl’s suspension — although it held its decision at bay pending a diocesan appeal, which was successful.

The cardinal also had to defend the diocese in both civil and church courts over his plan to consolidate 57 parishes and six missions into 28 parishes due to shrinking population throughout the diocese. The diocese was successful in both courts.

Cardinal Wuerl has had a keen appetite for extra work. While Pittsburgh’s bishop, he served as a consultant to a seven-year Vatican-commissioned study of U.S. seminaries. In 2010, after being elevated to the College of Cardinals, he was appointed to Vatican’s Congregation for Clergy and the Pontifical Council for Promoting Christian Unity. In 2012, Pope Benedict XVI named Cardinal Wuerl to the Congregation for the Doctrine of the Faith. Later that year, he was named relator, or recording secretary, for the 2012 Synod of Bishops.

In 2009, Cardinal Wuerl was named by the Vatican to head an ad hoc committee for the constitution’s implementation of a constitution dealing with the reception of Episcopalian priests into full communion with the Catholic Church. Cardinal Wuerl has also served as chairman of the board of directors of the National Catholic Educational Association.

At various points during his ministry in either Pittsburgh or Washington, he served as chairman of the U.S. bishops’ Committee on Priestly Life and Ministry, Committee on Education, Committee on Catechesis, Committee on Doctrine, the editorial oversight board for an adult catechism, and the bishops’ Task Force on Activities and Resources. He also has been a moderator for the Personal Ordinariate of the Chair of St. Peter, for U.S. Episcopal clergy and congregations declaring their intent to enter the Catholic Church.

It was during his chairmanship of the doctrine committee that committee members declared a 2007 book by Fordham University theologian Sister Elizabeth A. Johnson, a Sister of St. Joseph, to be “seriously inadequate as a presentation of the Catholic understanding of God.” Although Sister Johnson wrote an extensive defense of “Quest for the Living God: Mapping Frontiers in the Theology of God,” the bishops said her explanation did nothing to change their minds.

The board of directors of the Catholic Theological Society of America got into the fray, suggesting the bishops misread the book’s premise and expressed concern that the bishops’ criticism “seems to reflect a very narrow understanding of the theological task.” The committee said Sister Johnson’s defense had “not in fact demonstrated that the committee has misunderstood or misrepresented the book.”

As head of the Task Force on Activities and Resources, Cardinal Wuerl recommended the bishops slash their priorities and projects. At a 2004 meeting of the bishops in which the task force’s recommendations were overwhelmingly approved, he said the bishops have “taken on too many projects. We try to do too much,” adding, “Current diocesan assessments are adequate — more than adequate — if we provide for more limited and focused priorities. … We have to limit the number of priorities and then marshal the (headquarters) staff to those priorities,” he said.

He has been a prolific author, with 11 pastoral letters and 22 books bearing his name. The title of one book, “The Teaching of Christ,” reflected Cardinal Wuerl’s twin emphases on education and catechesis. It also served as the title of a syndicated television show that he did for several years in Pittsburgh, and as the title of his column in the Catholic Standard, newspaper of the Archdiocese of Washington.

As archbishop of Washington, Cardinal Wuerl has worked to expand educational opportunities for children and services to those in need, encouraged efforts to share the faith, championed the cause of religious freedom, led an effort to plan the church’s future outreach, utilized traditional and new media to spread the Gospel, and welcomed two popes to the nation’s capital. He also established the St. John Paul II Seminary, the first seminary in the United States named for that saint.

In 2007, he was faced with a financial crisis in the archdiocese with 12 Catholic grade schools in the District of Columbia that had operated as a consortium in an effort to save money. Cardinal Wuerl noted the archdiocese had spent $56 million over a decade to keep them open, an amount the archdiocese could not sustain. In 2008, he then leased seven of the schools to a “values-based” private charter school operator to serve the families in those neighborhoods.

The cardinal also fought to preserve the use of federal funds to help poor families pay tuition to Catholic and other nonpublic schools.

The city government passed a same-sex marriage ordinance in 2009. The day before the law was to take effect, the archdiocese cut benefits to some of its employees because it would have had to offer those benefits to any gay employees in a civil same-sex marriage. The archdiocesan Catholic Charities agency also dropped adoption services when the city said adoption providers would have to offer children for adoption by same-sex couples.

More recently, the cardinal battled the Washington Metropolitan Area Transit Authority, which banned ads the archdiocese has wanted to place in the subways, citing their religious content. The archdiocese has lost in court twice in the most recent case, including an appeal earlier this year. The decision, it said in a statement, is “a reminder that freedom of religion and expression in the public square should never be taken for granted, and we will continue to defend those rights at every opportunity.”

Cardinal Wuerl won kudos for his hosting of Pope Benedict in 2008 and Pope Francis in 2015.

By virtue of his position as archbishop of Washington, Cardinal Wuerl is chancellor of The Catholic University of America, based in Washington. Shortly after his arrival in 2006, the university named him a university professor of theology. He had a similar post at Duquesne University in Pittsburgh while he was bishop there.

The Pennsylvania grand jury report detailing 70 years of allegations sex abuse by priests and other church workers in six Catholic dioceses of the state, beginning in 1947 brought calls for Cardinal Wuerl to step down as Washington’s archbishop. The issue was how abuse cases had been dealt with during his years as bishop of Pittsburgh, one of the six dioceses covered by the report.

On Aug. 20, a Catholic high school, at his request, took his name off the school’s name. He also canceled a trip to the World Meeting of Families in Ireland, where he was scheduled to speak.

While all bishops are required to submit their resignations to the Vatican on their 75th birthday, recent practice has been to allow some bishops to stay on longer to observe a milestone, be it an anniversary of priestly or episcopal ordination, or of running a diocese.

Cardinal Wuerl was ordained to the priesthood in 1966 in Rome. He worked at the Vatican from 1969 to 1979. He then served as vice rector then rector of St. Paul’s College Seminary in Pittsburgh.

Before he was made a bishop in 1986, he was appointed executive secretary in 1982 to Bishop John A. Marshall of Burlington Vermont, for a papally mandated study of U.S. seminaries being conducted by Bishop Marshall.

PREVIOUS: Diocese moving from prayer to action in wake of Hurricane Michael

NEXT: Text of Cardinal Wuerl’s letter to Catholics of Washington Archdiocese