‘Battlefield’ of polemics in writing ‘Humanae’ clouded stress on mercy 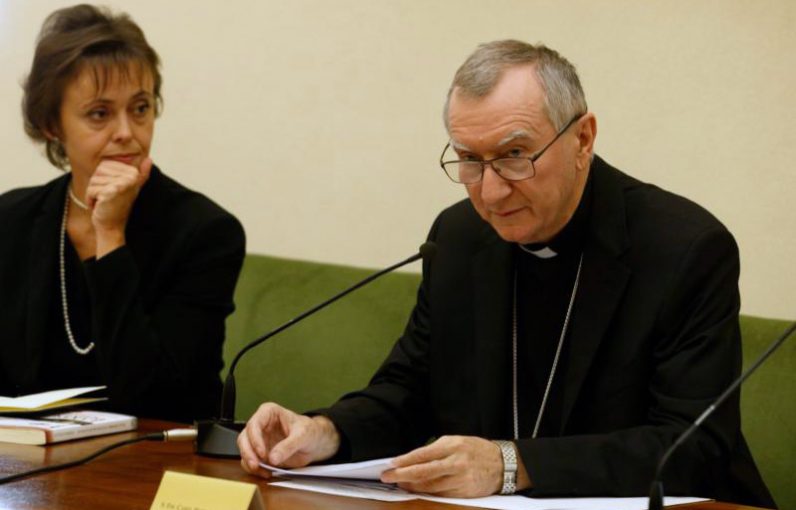 Cardinal Pietro Parolin, Vatican secretary of state, speaks at the presentation of the book, “The Birth of an Encyclical: ‘Humanae Vitae’ in the Light of the Vatican Archives,” at the Congregation for the Doctrine of the Faith at the Vatican Oct. 18. Also pictured is Vatican News journalist Barbara Castelli. (CNS photo/Paul Haring)

VATICAN CITY (CNS) — In the long process of drafting a document on the regulation of births, St. Paul VI rejected a version that “was limited to a rigorous reaffirmation of doctrine to which Christians and all people were asked to adhere docilely and without reservation,” said Cardinal Pietro Parolin.

In conjunction with the canonization Oct. 14 of St. Paul VI and the 50th anniversary of his encyclical, “Humanae Vitae” (“Of Human Life”), Cardinal Parolin spoke at an event Oct. 18 at the Congregation for the Doctrine of the Faith.

The event focused on the book, “The Birth of an Encyclical: ‘Humanae Vitae’ in the Light of the Vatican Archives.” Pope Francis gave Msgr. Gilfredo Marengo, a professor at Rome’s Pontifical John Paul II Theological Institute for Marriage and Family Sciences, access to still-closed archives to study the development of the encyclical and publish the book.

The volume documents the consultation process that went into the encyclical’s formulation and Pope Paul’s insistence that couples who would struggle to follow the teaching be listened to, welcomed and treated with mercy, Msgr. Marengo said.

The “debates and opposition” that followed the encyclical’s publication in 1968, Cardinal Parolin said, made it impossible for many people to see its accent on mercy, notice the lengths it goes to understand the modern problems facing families, and discover Pope Paul’s support for “the emancipation of women.”

The polemics were born “of a difficult season in the life of the church that now belongs to the past,” he said, although still today some Catholics engage in “polemics that could be avoided” and that distract people’s focus from the intent of church teaching.

Father Angelo Maffeis, president of the Paul VI Institute in Brescia, Italy, said the story of the document’s development and its reception “resembles a battlefield.”

A common misunderstanding, he said, is how the pope dealt with the majority and minority reports of the commission charged with studying the question. The majority report said there was nothing “intrinsically evil” with artificial contraception. The minority urged the pope not to change church teaching at all.

Until then, the church considered procreation to be the sole purpose of marriage, he said. But “Humanae Vitae” defined marriage as a sacrament that united a man and woman in love and opened them to the gift of having children.

Calling the encyclical “prophetic,” Cardinal Parolin asked, “If the love of spouses is the place where the Creator generates new lives, how can we not question ourselves about the way in which often, too often, children are considered either ‘an additional problem’ for a couple or, on the other hand, almost like an ‘object’ that is desired at any price?”

PREVIOUS: Church must reach out to young non-Catholics, Venezuelan says