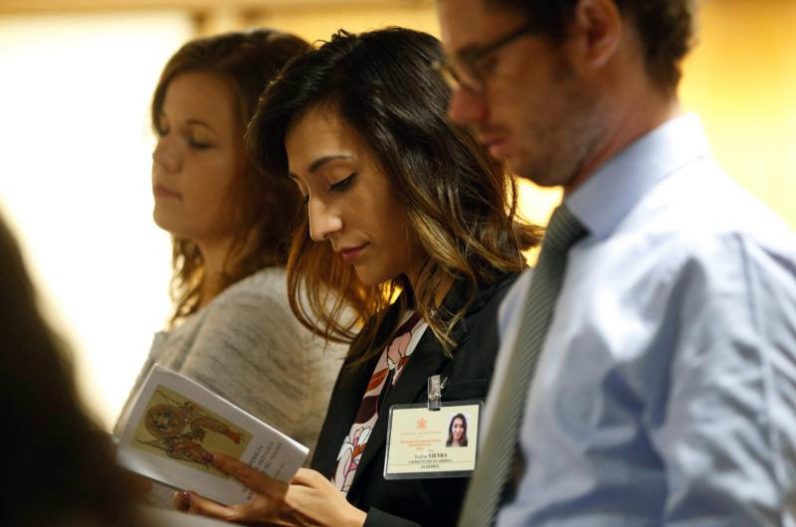 Yadira Vieyra, center, a synod delegate who works with migrant families in Chicago, attends a session of the Synod of Bishops on young people, the faith and vocational discernment at the Vatican Oct. 11. (CNS photo/Paul Haring)

VATICAN CITY (CNS) — One small group’s discussions at the Synod of Bishops concerning the LGBTQ community focused on how the Catholic Church could best minister to people who already feel marginalized and attacked by the church itself, a U.S. synod participant said.

Catholic Church “doctrine isn’t going to change, we just need to find a way to make them feel that Jesus loves them,” Yadira Vieyra said Oct. 19 at a Vatican briefing for reporters.

Vieyra, 29, is a specialist in child development and works in Chicago, helping migrant families. She had told America Magazine an interview published Oct. 12 that issues concerning gender and sexuality were being “discussed extensively” in her small working group during the synod on youth, faith and discernment. “It was controversial, it was heated,” she told the publication.

A reporter at the briefing asked Vieyra to expand on her comments about what was happening at those discussions.

“In terms of the topic of the LGBT community,” Vieyra responded, “we were talking in terms of how do we better minister to a group that has been, that feels attacked.”

“Oftentimes when ministered to in a poor manner, they feel like they are displaced and that the church doesn’t want them. We know that’s not true. Any Catholic knows that that is not true,” she said.

The church teaches that all homosexual acts are morally wrong but affirms the dignity of people with homosexual inclinations and calls them to chastity. Serious offenses against chastity include not just same-sex unions and homosexual activity, but also pornography, using contraception, premarital and extramarital sex and cohabitation.

Vieyra said when it comes to people in the LGBTQ community, “we just need to find a way to make them feel that like Jesus loves them. We hold them to the same standard as any heterosexual person who is having extramarital relations so it’s important to make sure that we communicate that and the church is here for them.”

“But it’s tricky ministering to a group that already feels attacked,” she added.

NEXT: Church shelter in Guatemala swamped by Hondurans heading north