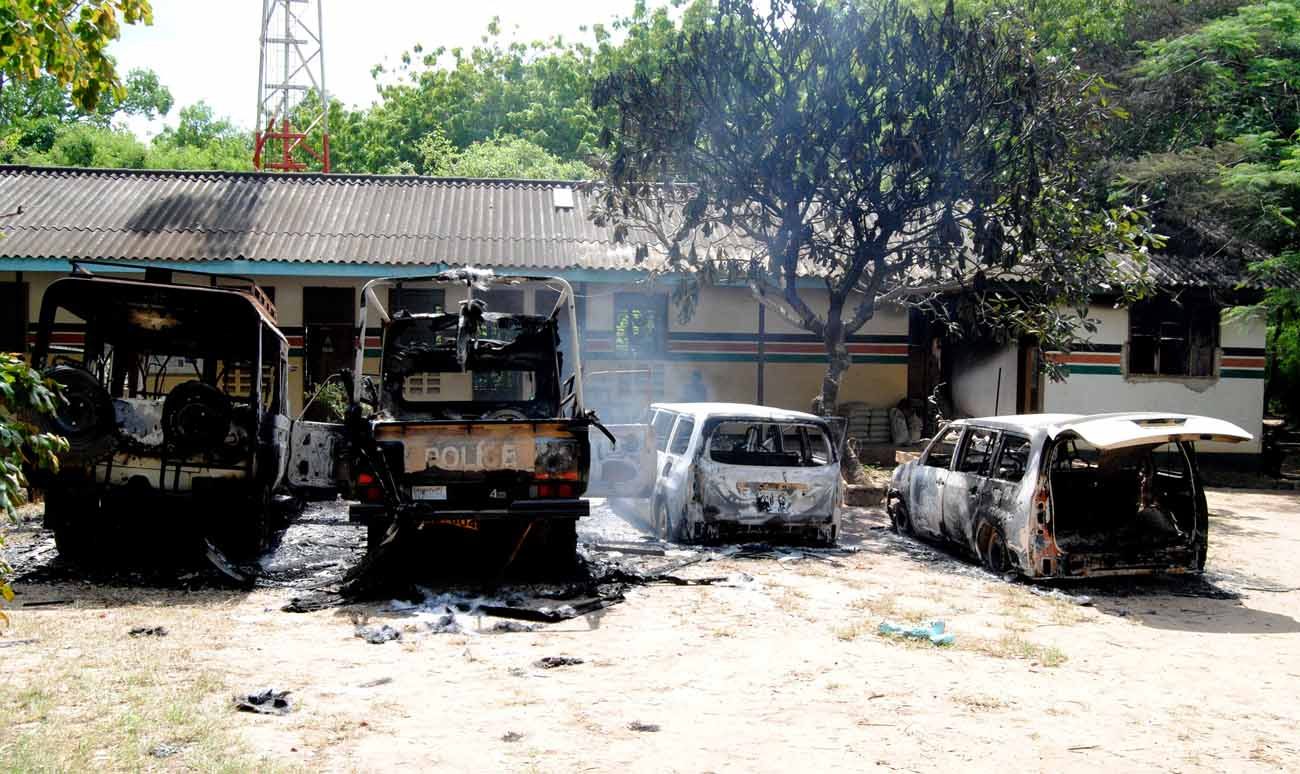 Burned-out vehicles are seen in 2014 outside a building in Lamu, Kenya. As frequent terror attacks continue in northeastern Kenya, Catholic bishops and priests are warning that the acts are posing threats to missions and their work. (CNS photo/Fredrick Nzwili)

NAIROBI, Kenya (CNS) — As frequent terror attacks continue in northeastern Kenya, Catholic bishops and priests are warning that the acts are posing threats to missions and their work.

“This is yet another incident when innocent Christian workers have become targets,” Father Alfred Murithi, the priest in charge of Our Lady of Consolation Cathedral in Garissa, told Catholic News Service Oct. 22. “It has been an ongoing trend. I think there are some elements who don’t want to see Christian presence in this region. They are misled to believe that Christians are infidels.”

Although the latest attacks are concentrated the predominantly Muslim North, their impact is being felt across the country, prompting a change in how churches carry out their day-to-today business. According to some of the Catholic priests, the acts have forced a change in how the people worship and how they mark important days and celebrations in the Christian calendar.

The changes also are visible in churches in Nairobi, where the militants recently attacked public places and transport. At the same time, security agencies have been warning that the city’s churches are possible soft targets of the militants.

“Christmas and Easter celebrations used to kick off at 10 at night and continue late into the night. People used to wait in the churches until midnight, but this no longer happens. Nowadays, worshippers are required to leave early for their homes,” said Father Maloba Wesonga, a Catholic priest at the Regina Caeli Parish in Nairobi.

Night prayers and Masses used to be the norm, but they have decreased or stopped due to the threats, said Consolata Father Nicholas Makau of Nairobi.

“This one of the measures the churches are taking to ensure worshipers are safe. There are also extra controls and increased patrols in parking lots and areas around the churches,” said Father Makau.

Father Wilybard Lagho, vicar general of the Mombasa Archdiocese, said some parishes had formed standby security committees to ensure the safety of the congregation. In the recent past, the coastal city has experienced terror attacks linked to radical Islamists. Pastors from other denominations have been killed or injured, and some churches have been vandalized.

“The committees have been receiving formal and basic training on security and security-related matters,” said Father Lagho. “Extra alertness and community involvement is frequently urged, since everyone is viewed as a target.”

The new security challenges are also forcing the churches to increase their annual budgets to meet the cost of guards, gun, closed-circuit cameras, metal detectors and armed police patrols.

Father Lagho told CNS: “We have had to increase the number of guards at the gate, since one was not enough. The congregation is conscious about its security, and they have been very cooperative.”

The attack on churches and other public installations increased after the Kenyan army entered Somalia in 2011 to fight the militant group al-Shabab, the al-Qaida affiliate in East Africa. In retaliation, the militants have attacked Kenya with deadly effect. In April 2015, an attack on Garissa University College in Garissa town left 148 people, mainly Christian students, dead. Smaller attacks continue to be witnessed in Lamu in the coastal and northeastern region. In September 2013, a terror attack in Nairobi’s Westgate shopping mall left 67 people dead and an estimated 200 injured.

While no Catholic church has been attacked in the recent past, the denomination is viewed as exposed. In February, police said they had foiled a plan to attack a mainline church in Nairobi’s city center, after they intercepted a vehicle rigged with explosives and a cache of weapons. In 2015, Holy Family Basilica was listed among the churches the terrorists planned to attack and, four years earlier, the basilica was evacuated after a bomb scare.

Concerned that terrorist attacks posed a threat to the churches, the Kenya Conference of Catholic Bishops warned in August that frequent assaults in northern parts of the country and the threats they posed to the church’s missions were very worrying.

NEXT: Pope calls for stronger preparation for sacrament of marriage