Who are the Chinese bishops received back into ecclesial communion? 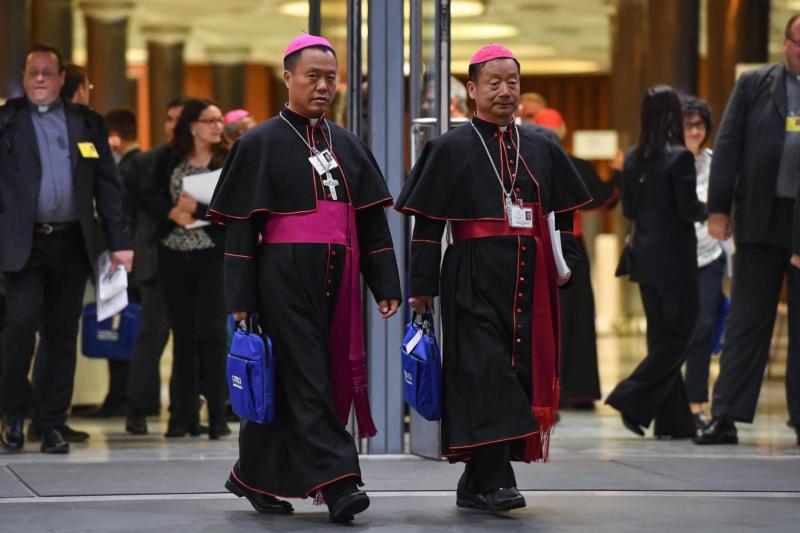 BANGKOK (CNS) — Bishop Joseph Guo Jincai, one of two Chinese participants attending the Synod of Bishops at the Vatican, concelebrated Mass with St. John Paul II twice in 1995. Although he was a member of the government-approved Chinese Catholic Patriotic Association — not recognized by the Vatican — it was only after his illicit ordination as a bishop of the Chinese-designated Diocese of Chengde that he was automatically excommunicated.

That excommunication — and the excommunications of seven other Chinese priests — were lifted as part of the Vatican-China agreement on bishops announced in September.

In January 1995, then-Father Jincai was part of the Chinese delegation to World Youth Day in the Philippines, where he concelebrated Mass with the pope. In June of that year, when St. John Paul visited Brussels for the beatification of Father Damian De Veuster, he concelebrated with three Chinese priests, including Father Jincai.

All of this took place as the Vatican was working to make inroads in China, where the Catholic Church and others had been repressed under the communist government. For several years after 2006, it seemed that the Vatican had turned a corner with Beijing on the appointment of bishops, a major point of contention between the two side since Mao Zedong tossed out Vatican diplomats in 1951 with the aim of creating a national church not subject to a “foreign power.”

But by 2010, things had turned sour again. After the Vatican could not agree on a 2009 deal on the appointment of bishops, Beijing began unilaterally appointing bishops. Three bishops out of eight given papal recognition in September were appointed by the Chinese Catholic Patriotic Association between 2010 and 2012; all those were quickly and publicly excommunicated.

The Vatican described Bishop Guo’s ordination as a “grave violation” of church law, and Pope Benedict said he “once again deplores the manner in which the Church in China is being treated and hopes that the present difficulties can be overcome as soon as possible.”

Yet all the eight bishops were ordained validly, but illicitly, a distinction in church law.

Under canon law, unless there is a dispensation, for the ordination to be licit, at least two bishops need to assist the main celebrant, and the ordination needs a prior pontifical mandate, said Jesuit Father Justin Glyn, an Australian canonist.

“It is this latter requirement for a pontifical mandate which seems to be at issue,” he told Catholic News Service.

The priest said failure to observe this requirement for a pontifical mandate “does not invalidate the ordination but results in automatic excommunication for both ordainer(s) and ordinand, which only the Holy See can lift.”

Father Glyn noted that while the text of the agreement between China and the Vatican has not been made public, “my understanding is that all that has been missing is the pontifical mandate … and Pope Francis seems to have agreed to lift the excommunications and recognize the liceity of the consecrations of the relevant bishops ex post facto.”

“Assuming that this is correct, the bishops (who were always validly ordained) now have their mandate (albeit ex post facto) and are restored to communion and to their office as bishop,” he told CNS in an email.

After the Sept. 22 agreement, Pope Francis created a new Diocese of Chengde for Bishop Guo, carving out a population of about 4 million, about 25 000 of whom are Catholics, from two existing dioceses.

Among the other bishops who have been restored to communion with the Vatican are senior leaders in the patriotic association and the Bishops’ Conference of the Catholic Church in China, also not recognized by the Vatican, as well in China’s rubber-stamp parliament, the National People’s Congress. Two of the bishops have long been said to have families.

In June 2011, Bishop Paul Lei Shiyin was illicitly ordained bishop of Leshan in the vast the southwest province of Sichuan that is home to an estimated 250,000 Catholics. Serious questions had been raised by Catholics at the local level about Bishop Lei’s moral conduct ahead of his appointment by Beijing; it has been widely reported internationally that he has a long-term relationship with a woman and has a child.

It was also reported that prior to his ordination, Bishop Lei was informed personally by the Holy See that he would not get Pope Benedict’s approval.

In July 2011, Father Joseph Huang Bingzhang was illicitly ordained bishop of Shantou, in Guangdong province, where there are an estimated to be at least 120,000 Catholics. In December 2016, he was appointed vice president of the patriotic association. He was a delegate to the National People’s Congress in 2016 and 2018.

In June 2012, Bishop Joseph Yue Fusheng was illicitly consecrated bishop of Harbin in the northern province of Heilongjiang, where a range of Christian denominations thrive. Five Vatican-appointed bishops concelebrated his ordination Mass and were asked at the time to “please explain” to the Holy See.

Bishop Vincent Zhan Silu of Mindong was appointed by the Chinese government in 2000 but did not take office until 2006. The bishop’s name was involved in controversy when the Vatican asked a so-called underground bishop to step aside for him to take over.

Bishop Joseph Liu Xinhong of Anhui was illicitly consecrated a bishop in May 2006. Bishop Liu has also long been rumored to have a family.

Also in 2006, Bishop Joseph Ma Yinglin of Kunming was illicitly ordained in the southern province of Yunnan. Since 2010 Bishop Ma has been president of the Bishops’ Conference of the Catholic Church in China, and he is vice chairman of the patriotic association.

The last of the eight received into ecclesial communion was Bishop Anthony Tu Shihua of Hanyang, who died in January 2017 at age 98. According to the Vatican’s media statement on the group, he “had expressed the desire to be reconciled with the Apostolic See” before his death.

The pope’s forgiveness and acceptance of the previously unrecognized bishops is part of the process toward healing the Chinese church. As the Vatican has said in its statement: “Pope Francis hopes that, with these decisions, a new process may begin that will allow the wounds of the past to be overcome, leading to the full communion of all Chinese Catholics.”