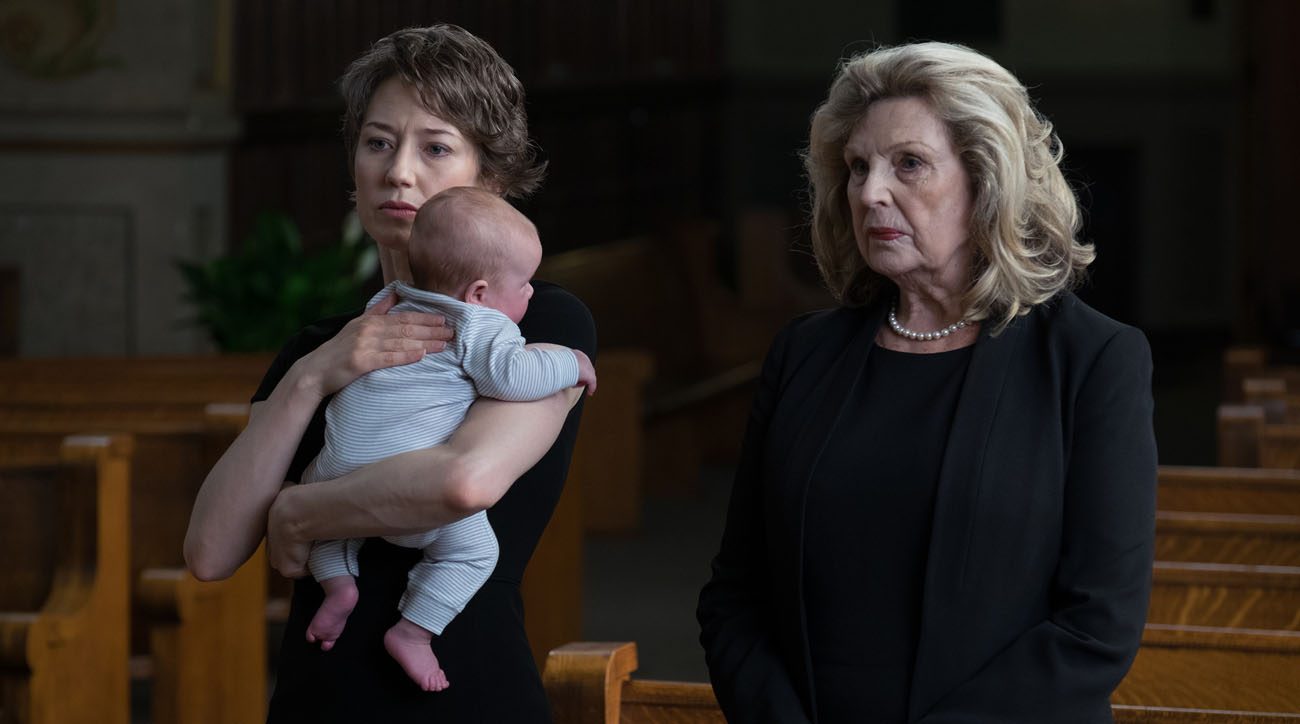 Carrie Coon and Ann Mitchell star in a scene from the movie "Widows." (CNS photo/Fox)

NEW YORK (CNS) — Well-crafted but gritty, the Chicago-set heist drama “Widows” (Fox) would be acceptable for at least a few adults if it did not ultimately send the message that, at least when the stakes are sufficiently high, the ends justify the means.

As it is, director and co-writer Steve McQueen’s adaptation of a British TV series, penned with Gillian Flynn, cannot be endorsed for anyone.

Viola Davis delivers a powerful performance as Veronica, a union official seemingly happily married to career criminal Harry Rawlings (Liam Neeson). After Harry and several of his gang members are killed while robbing money from corrupt politician Jamal Manning (Brian Tyree Henry), Veronica is threatened with death unless she repays the stolen loot.

Since the cash burned in the police ambush that took out Harry and his partners, Veronica has few options. Her prospects improve, however, once she retrieves a notebook Harry was keeping in a safe deposit box that carefully details all his operations, including the next job he was planning.

In short order, Veronica recruits two other women the botched crime left widowed, Linda (Michelle Rodriguez) and Alice (Elizabeth Debicki), to help her pull the projected theft off instead. The trio is eventually joined by overworked babysitter and beautician Belle (Cynthia Erivo) who agrees to drive their getaway van.

McQueen and Flynn work in some intriguing plot twists. But between a major storyline that involves Alice working as a high-end prostitute — at the urging of her mother, Agnieska (Jacki Weaver), no less — and a scene where Veronica blackmails a security executive using photos of the man having sex with his niece, the tone is dark and the behavior seamy.

But what pushes “Widows” — which also features Colin Farrell as Jack Mulligan, Manning’s rival for the post of Windy City alderman — out of bounds is the way it shrugs off the cost in human life its sympathetically treated main characters exact.

The film contains skewed values, some gunplay and other violence with gore, strong sexual content, including graphic acts and images with upper female and rear male nudity, a prostitution theme, a reference to incest, a few uses of profanity and pervasive rough and crude language. The Catholic News Service classification is O — morally offensive. The Motion Picture Association of America rating is R — restricted. Under 17 requires accompanying parent or adult guardian.

NEXT: Family will enjoy the charms of ‘Ralph Breaks the Internet’