At border, groups worry about tension, potential for government violence 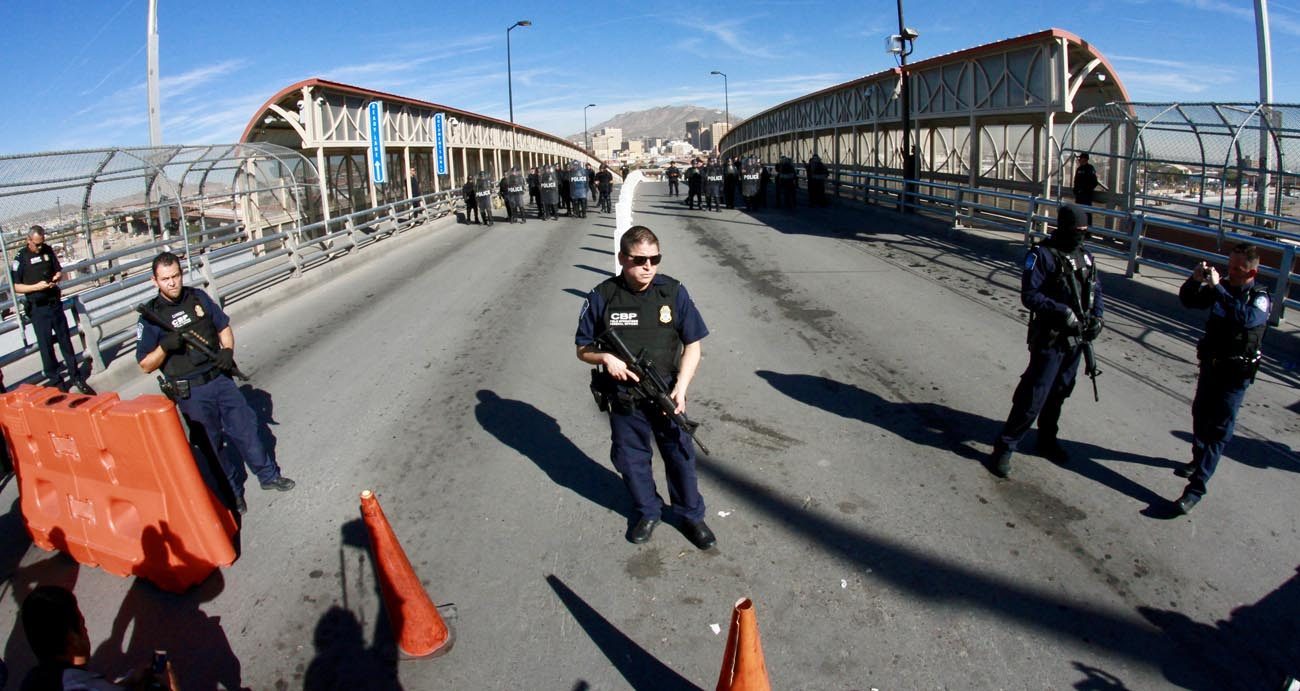 U.S. Customs and Border Protection officers and other armed federal agents temporarily close a bridge at a border crossing to conduct a military training drill Oct. 29. Some local organizations worried it signaled increasing militarization and possible use of violence against migrants on the border. President Donald Trump suggested Nov. 1 if migrants throw rocks at military members, they should consider the rock a rifle. (CNS photo/courtesy Luis Hernandez)

WASHINGTON (CNS) — In late October, the Trump administration announced plans to send more than 5,000 troops to the southern border ahead of a group of migrants from Central America heading north.

A day or two later, President Donald Trump said he’d send three times that number, perhaps up to 15,000, to fend off “some very bad thugs and gang members,” as he characterized, in tweets, a group traveling from Central America to the United States’ southern border with Mexico, a group often referred to as a caravan.

Catholic groups who work with migrants, and those affiliated with them, worry that the president’s words, actions and policy are creating a precarious atmosphere ahead of the arrival the group, said to number between 3,000 and 7,000, including about 2,000 youth and children.

There is a crisis, he said, but it didn’t exist until the president began to create it and orders coming from Washington began affecting those who live in border communities like El Paso, places that have a long history of welcoming migrants.

On Oct. 26, Corbett found himself, along with other El Pasoans, trying to help migrant men, women and children that he said the U.S. Immigration and Customs Enforcement dropped off, dehydrated and hungry, at a bus station in the border city. Typically, the agency would have called shelters, including facilities run by church organizations such as the Diocese of El Paso, where the migrants could be placed, fed and oriented them on a path toward family members or to another destination in the U.S.

Instead, due to a what seemed like a rapid policy change coming from Washington, Corbett said the group of about 100 migrant families was dropped off at an already crowded bus station after being processed at the border, without instructions or directions. Police were called in the chaos and they in turn called agencies to help. Some of the migrants didn’t know where they were or what to do, Corbett said.

The Diocese of El Paso quickly mobilized, along with other religious groups and town denizens to feed, clothe and comfort the disoriented families, which continued to crop up the following day and the day after that, but the moment of chaos was just beginning. Days later, armed federal agents, Corbett said, performed military exercises on the Santa Fe Bridge, an international bridge that straddles the two countries.

“Clearly, it was a show of force,” Corbett said, a flex of the military muscle sent as a possible message to the migrants, but also a visual message to drive voters, who don’t want to see the migrants enter, to the polls at midterm election ballot boxes across the country.

What’s happening in El Paso, “shows the two faces of how we address issues of migration,” Corbett said.

El Paso Catholic Bishop Mark J. Seitz, who met with immigration authorities prior to the incident, said there’s been an uptick in the number of migrants entering in October and immigration officials said their facilities are past capacity to handle the incoming flow.

However, there was a sudden change in policy, where migrants, typically released to community organizations, were instead “released (by immigration officials) to the streets,” Bishop Seitz said.

He spent time Oct. 30 with one of the incoming groups and said he heard stories of overcrowding, of conditions that were “deplorable,” with migrants being held for longer periods of time, no doors on bathroom stalls, not being able to tell whether it was day or night in the holding facilities where they were detained.

“A number of them caught illnesses where they were,” said Bishop Seitz, whose diocese is organizing shelter and other humanitarian help for the incoming flow.

As religious and other community organizations respond with help, the president offers the second kind of response Corbett speaks about.

In a Nov. 1 news conference, Trump spoke of a plan to set up “massive tents” to detain the migrants for longer periods of time and called the much-publicized group mobilization traveling from Central America across Mexico “violent,” saying it was an “invasion,” one that sought to burden the United States, put a strain on the country’s schools, hospitals, undermining public safety and depleting resources.

They were coming, he said, because they were poor and “asylum is not a program for those living in poverty,” hinting that he would soon announce executive action to deny asylum to their likes. He also said the group had attacked the Mexican police and insinuated the group included gang members.

“They’re pretty tough people,” he said. “I don’t want them in our country.”

Bishop Seitz said the group, whose numbers dwindle as many become tired of walking the great distance, is “totally misunderstood. This is not some kind of invading force.”

“What’s happening is that people who are too poor to pay a coyote (a smuggler) … are banding together” to travel with others, finding safety in numbers, he said.

“Sending thousands of troops to the border does not send a helpful tone,” Bishop Seitz said.

Those like Corbett worry that the military exercises on the El Paso bridge, along with the recent chaotic incidents in the border city were simply a “foretaste” of what’s to come, not just in El Paso but around different cities along the border, and that, Corbett said, “that’s what worries me.”

Trump’s Nov. 1 news conference in Washington may only have intensified the fears of those like Corbett, who may have to contend with what happens thousands of miles away near the border. Referencing an incident of migrants throwing rocks at Mexican police, Trump said authorities were badly hurt and while he hoped the same wouldn’t happen near the U.S., “we will consider that a firearm.”

“If they want to throw rocks at our military, our military fights back,” Trump said. “We’re going to consider — and I told them, consider it (the rock) a rifle.”

Bishop Seitz urged others to delve into the lives of migrants, to hear their stories and learn what causes migration. A better solution, he said, is to “address the factors making them feel forced to flee,” including high homicide rates and poverty at home.

“The answer is not a bigger fence,” he said.

For believers, he urged: “Check the Gospel.”

“It doesn’t talk about offering charity when it’s convenient. It doesn’t say ‘take care of your family and friends and let the others … let happen what might happen to them,'” he said. “The example of Jesus tells us we are to love whoever is in need. Isn’t that the message of the good Samaritan? It’s a fundamental Christian question being posed. What’s our answer going to be?”