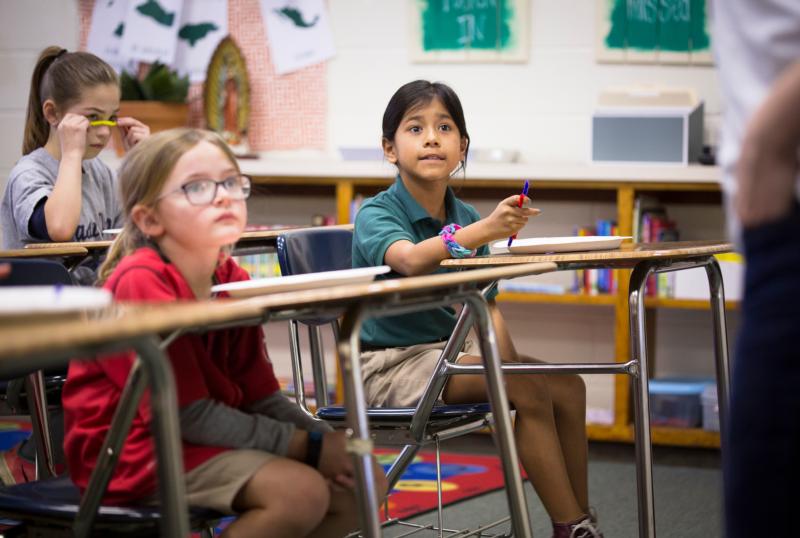 WASHINGTON (CNS) — If admitting there is a problem is half the battle, then Catholic leaders and educators are halfway there by talking about an issue that many find troubling: the small percentage of Latino children attending Catholic schools.

The issue was highlighted two years ago in a Boston College report, “Catholic Schools in an Increasingly Hispanic Church,” which examined the disparity between the number of school-age children who are Hispanic and the number of these students — 2.3 percent — enrolled in Catholic schools. Although that number is now closer to 4 percent, it’s still a very small percentage and quite noticeable in a church with a growing Hispanic population and at a time when Catholic schools are experiencing overall enrollment decline.

Church and education leaders gathered at The Catholic University of America Oct. 30 to discuss this issue during an event sponsored by the university and America Media, the umbrella group for a group of Jesuit media platforms, including America magazine.

The afternoon event included a luncheon, a closed panel discussion and a town hall meeting that was essentially preaching to the choir since many in the audience were Catholic educators, but its livestream broadcast gave it a broader reach.

The cost of attending Catholic schools was something that came up right away as a key barrier to Latino enrollment and some panelists said more families need to be aware of available vouchers or tax credits, even if this is just a short-term solution. Other ideas included: more scholarship program; more donor sponsorship; and different school models separating parish school governance from parish operations or grouping schools regionally from several parishes.

Panelists also said schools need to offer more dual language programs and insist that teachers learn to speak Spanish and provide them with the opportunities to learn the language.

“The risk is that Catholic education becomes the privilege of the privileged, the elite of the elite,” Coadjutor Bishop Oscar Cantu of San Jose, California, said about current tuition rates.

He also said he has “had the unwelcome duty of having to close schools” that had no possibility of continuing either from debts or “no vision forward.”

The bishop said the trend he has seen in Catholic education is not what it was at its roots with its “tradition of educating the poor and immigrants.” He urged Catholic educators to go back to the original reason for Catholic schools in this country and “take a page from that mission.”

Bishop Cantu said he was willing to travel across the country to be part of this gathering because he feels strongly about the importance of Catholic education, mainly from his own experience.

He said his own Catholic schooling — from elementary school through college — helped form him and give him opportunities, which was something his Mexican immigrant father wasn’t able to have when he stopped school in the sixth grade and helped on the family farm.

Veronica Alonzo, associate superintendent of operations for the Dallas Diocese, stressed that beyond academics, Catholic schools can prepare Latinos to be leaders in the church.

And Tom Burnford, president and CEO of National Catholic Educational Association, said that opening Catholic schools’ net wider to include more Latino students would not only help schools with declining enrollments but would ultimately do more to pass on the faith.

He said there currently are 6,400 Catholic schools serving 1.8 million students in grades K-12 and that enrollment includes 320,00 Latinos or 17 percent of Catholic school students.

He asked the audience, and no doubt the wider Catholic community, to consider a key question about Catholic schools’ outreach and viability.

NEXT: At border, groups worry about tension, potential for government violence