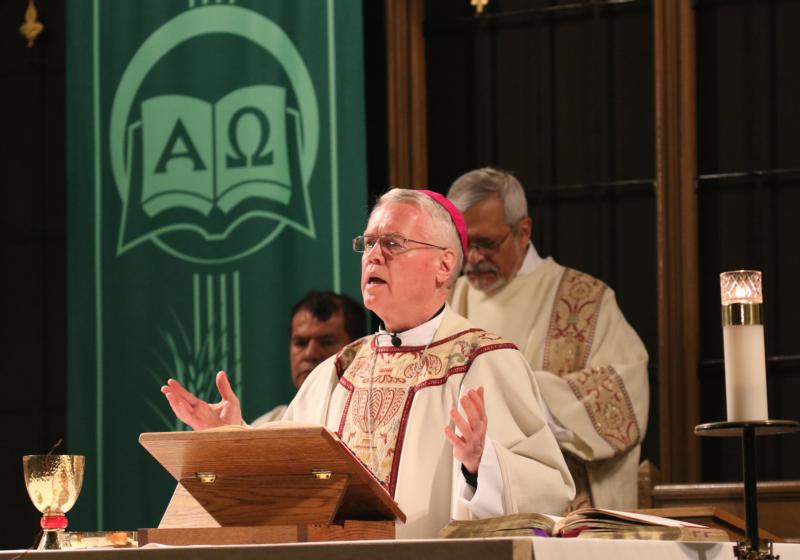 In this 2015 file photo, New York Auxiliary Bishop John J. Jenik celebrates Mass at St. John-Visitation Church in the Kingsbridge section of the Bronx borough of New York. He has been removed from public ministry pending a Vatican review of a decades-old accusation of sexual abuse against him, a claim he denies, the Archdiocese of New York said in a letter released Oct. 31. (CNS photo/Gregory A. Shemitz)

WASHINGTON (CNS) — A New York auxiliary bishop has been removed from public ministry pending a Vatican review of a decades-old accusation of sexual abuse against him, a claim he denies, the Archdiocese of New York said in a letter released Oct. 31.

The letter dated Oct. 29 is said to have been sent to parishioners of Our Lady of Refuge in the Bronx, where Auxiliary Bishop John J. Jenik was the pastor until late October.

In a video made public via Twitter on Oct. 31, New York Cardinal Timothy M. Dolan said he had met with parishioners the day before to inform them of the developments, which included Bishop Jenik stepping way from public ministry.

“This is sad for all of us, this is sad for the victim,” Cardinal Dolan said in the video. Its accompanying tweet references “an allegation of sexual abuse of a minor.”

The archdiocese also provided Catholic News Service an undated letter written by Bishop Jenik to his parish in which he denies the accusation.

“I will ask the Vatican, which has ultimate jurisdiction over such cases, to review the matter, with the hope of ultimately proving my innocence,” the bishop writes in the letter.

Cardinal Dolan’s letter describes the process of review of the accusation and says that a “Lay Review Board concluded that the evidence is sufficient to find the allegation credible and substantiated.”

Such a board reviews and consults on all cases of alleged abuse by clergy. Board members are often professionals in law enforcement, human resources, mental health, child protection and other fields.

Bishop Jenik in his letter says that while the board and those who carried out the process “have a great burden as they confront the evil of sexual abuse, I continue to steadfastly deny that I have ever abused anyone at any time.”

He adds that he will abide by the protocols set forth “and will not be publicly exercising my ministry” and step aside as pastor of Our Lady of Refuge, where he has spent a majority of his years in ministry since his ordination as a priest. He also asks for prayers “for the person who brought this allegation against me.”

Pope Francis named then-Msgr. Jenik as an auxiliary bishop for the New York Archdiocese in June 14, 2014. He was ordained a bishop Aug. 4 of that year at St. Patrick’s Cathedral.

Bishop Jenik was born in Manhattan March 7, 1944. He was ordained a priest by New York Cardinal Terence Cooke in 1970. The cardinal sent him to the Catholic University of Ponce, Puerto Rico, to learn Spanish language and culture.

He has served at three parishes in the Bronx, most recently at Our Lady of Refuge as pastor. He was parochial vicar at St. Jerome Parish, 1970-1974; St. Thomas Aquinas, 1974-1978; and Our Lady of Refuge, 1978 to 1985. Before his recent pastorate at Our Lady of Refuge, he was pastor there before, from 1985 to 2014. He also has long been involved in efforts to provide housing for the poor and to fight crime, corruption, drugs and prostitution.

In his video, Cardinal Dolan said the abuse allegation marks “a sad day” for parishioners, Bishop Jenik and the church, as it continues to deal with the sex abuse crisis.

“These wounds of the church you bear as well,” he said.

In June, the Archdiocese of New York also disclosed that a review board had found a decades-long allegation of sexual abuse of a minor against former Cardinal Theodore E. McCarrick to be “credible and substantiated.”

The alleged abuse was said to have occurred when Archbishop McCarrick was a priest in the archdiocese almost 50 years ago. He has denied the allegation but resigned from the College of Cardinals in mid-July.

PREVIOUS: One man glad to be in court to see priest plead guilty to abuse