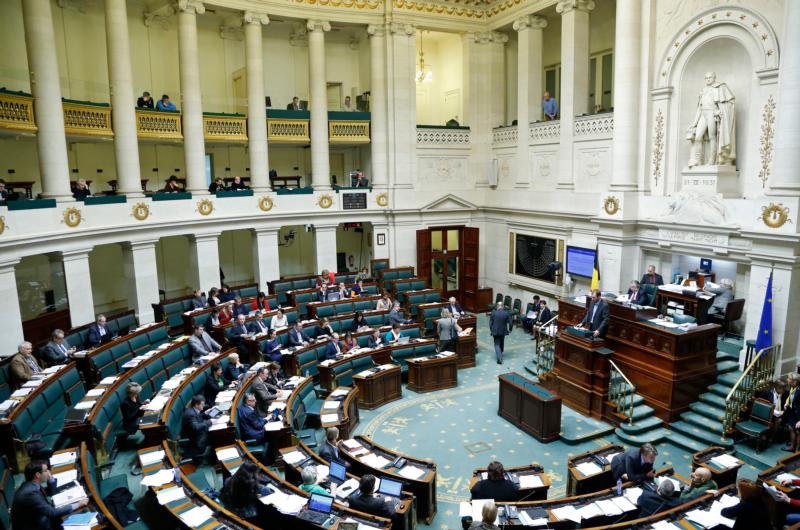 The lower house of the Belgian Parliament is seen during its plenary session in Brussels. The government will prosecute two doctors and a psychiatrist for an allegedly illegal act of euthanasia. (CNS photo/Francois Lenoir, Reuters)

MANCHESTER, England (CNS) — The head of a Catholic order that runs homes for psychiatric patients welcomed the first prosecutions of Belgian doctors for an illegal act of euthanasia.

Brother Rene Stockman, superior general of the Brothers of Charity, said the trials of two doctors and a psychiatrist for allegedly poisoning Tine Nys, 38, would be “a real test-case for the Belgian situation.”

“Also, in other countries where euthanasia is legalized, they will be very curious about the outcome,” he told Catholic News Service in a Nov. 28 email.

He said the prosecutions have come as “a real surprise” for Belgium, which legalized euthanasia in 2002, because there have been “so many years of uncontrolled exercising of euthanasia.”

“Suddenly one case has been taken very seriously and has gone to the level of the higher court,” he said.

“Even in the pro-euthanasia camp, we hear reactions that it is important to develop more strict rules in the procedures … to prevent mistakes like that,” he said. “But for those who are against euthanasia, we hear only the word: ‘finally.'”

Nys had persuaded the three doctors to certify that she was suffering unbearably and incurably from Asperger’s syndrome so that she could meet key legal criteria to die by lethal injection under the Belgian euthanasia law.

In April 2010, within two months of obtaining their consent, Nys died by euthanasia in the presence of her family.

Her sisters, Lotte and Sophie, have since argued that she was not autistic but was simply upset about the breakdown of a relationship. They said their sister received no treatment for her alleged condition before her death, so they maintain it was not possible for doctors to establish that it was unbearable and incurable.

The criminal cases were announced Nov. 22 by authorities in Ghent and were reported the following day in the Belgian media, which named the doctors only as Joris V.H., Frank D.G. and Godelieve T.

The three will be tried by jury and, if convicted, the jurors will advise the judge on what sentences should be passed against them.

The authorities moved against the medics just weeks after Dutch prosecutors pressed charges against a doctor who slipped a sedative into a senile woman’s coffee, then injected deadly drugs into her body as her family pinned her down because she resisted.

Like the Belgian cases, the Dutch case will be the first prosecution of a doctor in the Netherlands for failing to observe the law, which stipulates that a patient must be capable of freely consenting to death. Two other doctors in Holland are being investigated for similar offenses.

Belgium has repeatedly shocked the world in its pioneering of euthanasia, most recently by its admission that two children — ages 9 and 11 — have been killed by doctors in the past two years, the first since the country expanded the law in 2014 to permit the euthanasia of “emancipated minors.”

Official figures have revealed that euthanasia deaths have doubled in Belgium since 2011, and last year Benoit Beuselinck, consultant oncologist of the Catholic University Hospitals of Leuven, reported that increasing numbers of nurses and social workers who specialize in treating dying patients are quitting their jobs because hospital palliative care units are being turned into “houses of euthanasia.”

Brother Stockman said: “We all know that Belgium is on the top with a very liberal law on euthanasia, even for minors and psychiatric patients.

“We can only hope that this case will invite people to reflect which way they are going with society, where absolute freedom and autonomy and self-determination have become absolute No. 1 on the scale of values,” he said.

He said it was unknown how the jury would react, “knowing that for the moment in Belgium, public opinion is very positive toward euthanasia.”

He said that, whatever the trial’s outcome, the Catholic Church in Belgium would “maintain our vision that respect for life is absolute and euthanasia can never be accepted.”

Over the past 18 months, Brother Stockman, a psychiatrist, has struggled to prevent euthanasia being practiced at 12 care homes run by his order after it changed policy to conform with Belgian law.

Last year, he sought the intervention of Pope Francis. He told CNS Nov. 24 that he believes the issue is close to being resolved.

NEXT: Basilians pray as they await inquiry results at Toronto school