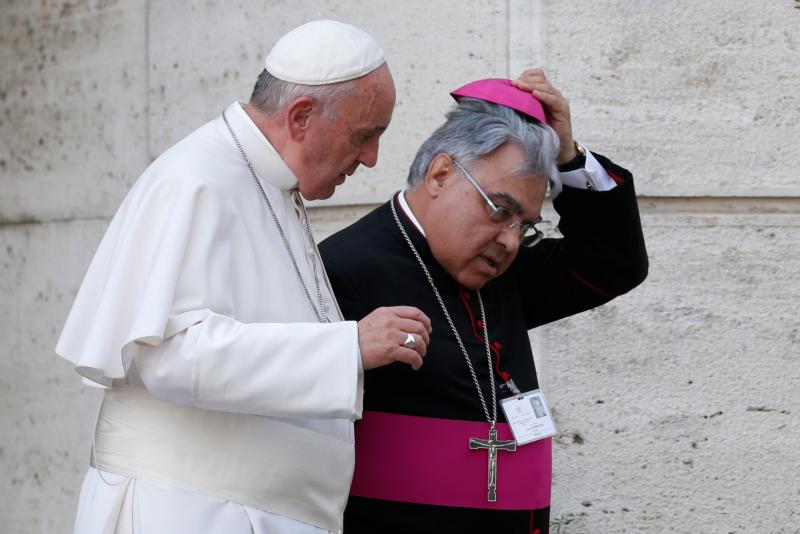 In this 2015 file photo, Pope Francis and Italian Bishop Marcello Semeraro of Albano leave the opening session of the Synod of Bishops on the family at the Vatican. (CNS photo/Paul Haring)

ROME (CNS) — Pope Francis’ call for a missionary church that is focused on preaching the Gospel will be the guiding principle of the apostolic constitution that will govern the Roman Curia, the secretary of the pope’s international Council of Cardinals said.

Addressing students and staff at Rome’s Pontifical Lateran University Nov. 12, Bishop Marcello Semeraro of Albano said that the document will also focus on the need for subsidiarity and “a healthy decentralization,” which will strengthen the church’s mission to serve others.

“The Roman Curia is not only an instrument at the service of the Roman pontiff, but also an instrument of service to the particular churches,” Bishop Semeraro said.

The current draft of the document, titled “Praedicate Evangelium” (“Preach the Gospel”), was reviewed by the international Council of Cardinals — the so-called C9 — and a final draft given to the pope in June.

Currently, Bishop Semeraro said, the draft is undergoing “stylistic revision” and a “canonical re-reading,” which are two necessary stages of development before its release. The bishop did not say when its publication is expected.

“A stylistic revision means giving the text the best ‘literary’ coherence possible after the work has been completed. The same can be said for the canonical re-reading, given the legal nature of the document,” he said.

The Italian prelate said that the key to understanding the pope’s vision of the reform of the Roman Curia lies in his apostolic exhortation, “Evangelii Gaudium” (“The Joy of the Gospel”), in which Pope Francis called for a “missionary option” in the church that is geared toward “the evangelization of today’s world rather than for her self-preservation.”

Structural changes, Bishop Semeraro said, “must be the result of a pastoral choice, and this obviously also applies to the Roman Curia.”

However, he added, changes to the structure of the Roman Curia are made in the light of church tradition and must be in keeping with “the principle of fidelity to history and continuity with the past.”

“It is precisely according to this principle that it would be misleading to think of a reform that would upset the entire structure of the curia,” Bishop Semeraro said. While the existence of the various dicasteries must be preserved, like any “structure of service, it always needs a permanent sort of maintenance.”

For Pope Francis, he said, the path toward curial reform “is much more than any structural change.”

Reform, Bishop Semeraro said, is about doing what “is necessary so that in the course of time and in changing situations, the church may preserve her ‘sacramentality,’ that is, her transparency toward God who makes her exist and dwells in her.”