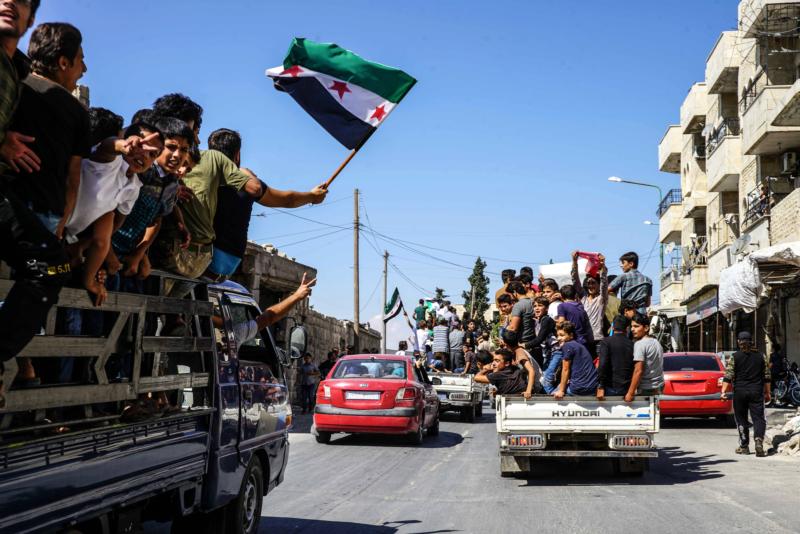 People carry Syrian revolution flags and placards Sept. 14 during protests in Kafr Nabl, Syria. In a statement following their Nov. 12-16 annual meeting, Lebanon’s Catholic religious leaders appealed to the international community to stop the wars in the Middle East and to bring about a comprehensive and just peace. (CNS photo/Stringer, EPA)

BEIRUT (CNS) — Lebanon’s Catholic religious leaders appealed to the international community to stop the wars in the Middle East and to bring about a comprehensive and just peace.

In a statement following its Nov. 12-16 annual meeting, the Assembly of Catholic Patriarchs and Bishops of Lebanon urged Catholics “to endure the grace of God in the hope of rebuilding their homelands with their Muslim brothers in equal and responsible citizenship.”

The prelates expressed their “anguish at the continuation of the wars in the Middle East, which continue to destabilize the peace, wreak havoc, destroy and displace citizens.” Reiterating their condemnation “of violence in all its forms,” they called for constructive dialogue among officials.

The patriarchs and bishops appealed to “the international community and concerned states” to stop wars in the region and “to bring about a comprehensive and just peace and to work seriously for the return of displaced persons, refugees, abductees and deportees to their countries, homes and properties.”

In their statement, the church leaders affirmed the principles that have been proclaimed by Pope Francis regarding the Middle East: that peace is a condition for Christians to remain in their homelands; that there is no Middle East without Christians, who are a factor of equilibrium and stability in it; and that citizens have the duty to defend the rights of individuals and minorities.

Turning with urgency to the continuing impasse in forming Lebanon’s government more than five months after parliamentary elections, the prelates said it is unacceptable that the government still does not exist. They urged all the political parties concerned to facilitate the formation of the government, “today before tomorrow.” They pointed to “the loss of mutual trust, the absence of internal unity and the tyranny of private interests, as well as external interference” as reasons for the deadlock.

They applauded “with all the Lebanese — at home and abroad — the historic reconciliation” of two rival Maronite Catholic political leaders after more than four decades of enmity. Samir Geagea, leader of the Lebanese Forces political party, and Suleiman Frangieh Jr., head of the Marada party, have been foes since the early days of Lebanon’s 1975-1990 civil war.

Their formal reconciliation took place Nov. 14 under the patronage of Cardinal Bechara Rai at Bkerke, Maronite patriarch. The two Maronite leaders signed a document confirming their “joint will to turn the page of the past and move on toward new horizons” in their relations “at the human, social, political and national levels for the years to come.”