World has not learned lessons from Great War, pope says 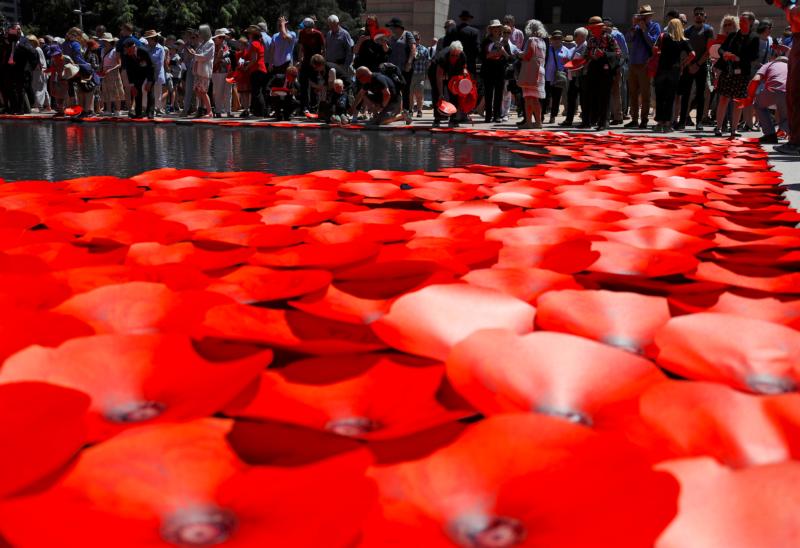 Members of the public place floating poppies onto a pond during a memorial service at the ANZAC War Memorial to mark the centenary of the armistice ending World War I, in Sydney Nov. 11. (CNS photo/David Gray, Reuters)

VATICAN CITY (CNS) — The brutality of the First World War is a lesson that the world has yet to learn, Pope Francis said.

World War I is a chapter in history that serves as a dire warning and a call for world leaders “to reject the culture of war and to seek every legitimate means to put an end to the conflicts that still stain many regions of the world with blood,” the pope said Nov. 11 after praying the Angelus with pilgrims gathered in St. Peter’s Square.

“It seems that we do not learn,” he said. “As we pray for all the victims of that immense tragedy, we forcefully say: Let’s invest in peace, not in war!”

In the early afternoon, the bells of St. Peter’s Basilica tolled solemnly along with church bells around the world to commemorate the end of one of the bloodiest wars of the 20th century.

Recalling the words of Pope Benedict XV, the pope said the Great War led to “the useless slaughter” of innocent lives and that the world must learn from its errors to avoid repeating the same mistakes.

The world, he added, should learn from the “emblematic sign” of St. Martin of Tours who, according to legend, tore his cloak to share with a beggar only to discover in a dream that the poor man was Christ.

St. Martin, he said, “cut his cloak in two to share it with a poor man. May this gesture of human solidarity show everyone the way to build peace.”

Earlier that day, world leaders and dignitaries gathered in Paris near the famed Arc de Triomphe to commemorate Armistice Day.

Cardinal Pietro Parolin, Vatican secretary of state, was among the officials who solemnly processed toward the Tomb of the Unknown Soldier, a monument honoring the countless dead soldiers whose remains were never identified following the war.

In his address, French President Emmanuel Macron denounced nationalism as a “betrayal of patriotism” and echoed the pope’s sentiments on the reemergence of old rivalries and new ideologies that threaten the world once again.

“I know, the old demons are resurging, ready to finish off their work of chaos and death. New ideologies manipulate religions, push a contagious obscurantism,” Macron said. “Sometimes, history threatens to retake its tragic course and threaten our heritage of peace that we believed we had definitively settled with our ancestors’ blood.”

NEXT: Archbishop: Irish actions in WWI should be impetus for today’s leaders