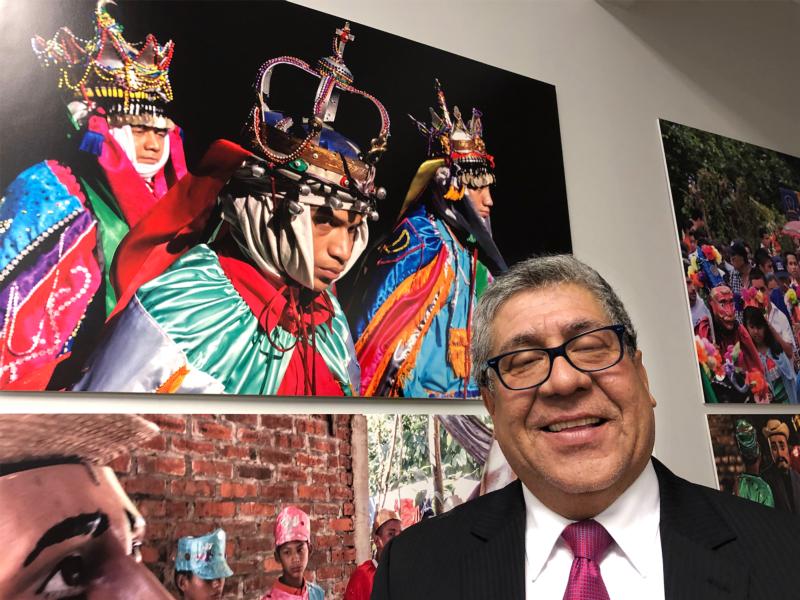 Miguel Servellon attends the Nov. 30 reception opening of the exhibit "El Salvador: Traditions and Identity" at the Embassy of El Salvador in Washington displaying his colorful photographs of indigenous towns and cities in the Central American nation. Servellon, who is Salvadoran and a lawyer by profession, captured some of the spiritual life of the country's indigenous people, which in large part includes Catholicism. (CNS photo/Rhina Guidos)

Miguel Servellon attends the Nov. 30 reception opening of the exhibit “El Salvador: Traditions and Identity” at the Embassy of El Salvador in Washington displaying his colorful photographs of indigenous towns and cities in the Central American nation. Servellon, who is Salvadoran and a lawyer by profession, captured some of the spiritual life of the country’s indigenous people, which in large part includes Catholicism. (CNS photo/Rhina Guidos)

WASHINGTON (CNS) — Miguel Servellon remembers that his mother’s prayers during difficult times of war in his native El Salvador included the phrase “life always has color,” words of comfort she used to transmit to her children the message that there is always beauty in the world even when times are hard.

Now at 53, Servellon transmits that message of hope through his photographs, which includes a series on display at the Embassy of El Salvador in Washington unveiled Nov. 30 during an event celebrating Salvadorans living abroad.

The series of 25 photographs in the “El Salvador: Traditions and Identity” exhibit focuses on indigenous towns and cities in the Central American nation, capturing part of their spiritual life, which includes in large part Catholicism.

It was difficult to carry on with a meeting in the room where the exhibition had just been set up because the color of the photographs kept grabbing away the attention of those gathered there, said Claudia Canjura, the Ambassador of El Salvador, during a reception introducing Servellon and the exhibit’s curator, Jesus Romeo Galdamez, Nov. 30.

“I remember my mother praying every day (of the war), telling me that life always has color, life always smiles,” said Servellon, a lawyer by profession, who said that while El Salvador has remained a troubled nation even after war of the 1970s and 1980s, “we can spend hundreds of hours talking of the marvelous of El Salvador.”

After the war that lasted officially from 1980 until 1992, El Salvador has struggled to become a nation at peace. Gang members deported from U.S. prisons gained a foothold in the Central American country in the 1990s and have terrorized the Salvadoran citizenry, particularly the poor, for decades. In turn, many Salvadorans have left for places such as the U.S., seeking safety and better economic conditions. Some ended up in places such as the Washington metropolitan area, home to some 200,000 Salvadorans — one of the largest concentrations in the United States.

Like the indigenous people in the photographs — populations dispossessed of their riches, decimated during and after the Spanish conquest, and later abandoned — El Salvador is a country where beauty is still present even during hardship, said Servellon, a former seminarian who said his Catholic education at Salesian schools influenced his desire to deliver a message of conscience and optimism through his art.

He depicts in them the young and the old, the pagan and the Catholic side of indigenous towns that suffered under the Spanish crown and whose resources also were plundered in recent centuries by politicians and economic systems that all but decimated native populations.

And yet, those populations are still standing and celebrating their beauty via the color of native outfits and by manifesting the mix of the spirituality of their indigenous ancestors with the “imposed” Christian faith, Servellon said.

The mix shown in the spiritual life of Salvadorans is a main component of identity and it’s important to understand those roots, Galdamez, the curator, said.

“It’s important for people to reaffirm their identity, their sense of belonging, to be able to coexist among nations with that identity,” Galdamez said. “It is the true and historic self, that’s what we need to construct identity, to elevate it and to help elevate the self-esteem of a nation. We can’t be open to the world without that identity.”

The exposition can help the “Salvadoran universe,” such as the one that exists in places where there are large concentrations of Salvadorans and their descendants, like Washington, conserve and strengthen the ethnic roots that mark Salvadoran culture, Galdamez said.

Only by understanding that past can the country and its people put present struggles in perspective, Servellon said.

“I remind you that El Salvador is a great country, one that has struggled, fallen, but one that has risen again,” he said.

The photographs aren’t just meant to show something “decorative,” Servellon said, but to show beauty and hope that will perhaps inspire solidarity among Salvadorans throughout the world.

“We have a mission to accomplish,” he said. “I hope that through the images, we can gain knowledge, not just of beauty, but of a social reality, one in which we are obligated to show solidarity and to ask how we can help.”

PREVIOUS: German Advent cookies are a labor of love