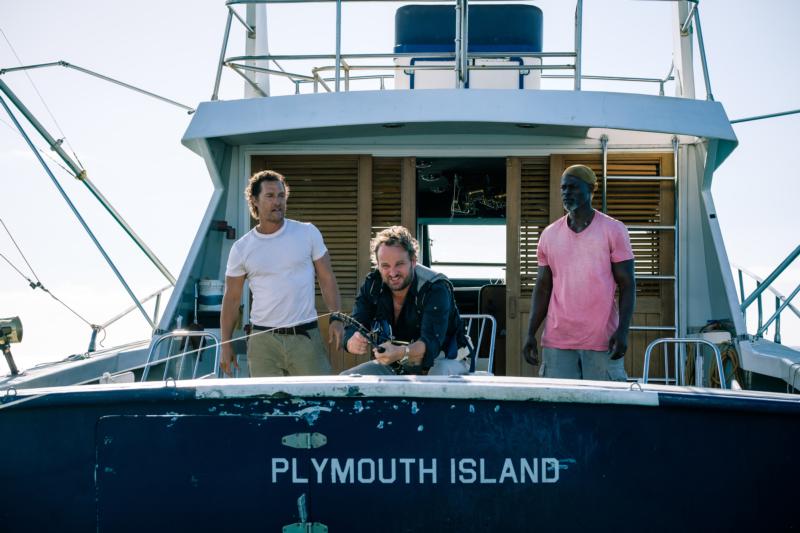 NEW YORK (CNS) — Is it possible to make a great movie about a woman wanting to croak her husband?

As anyone who has ever seen the 1944 film noir classic “Double Indemnity” will know, the answer is an emphatic yes. So much the worse for the cinematically flawed and ethically impoverished romantic thriller “Serenity” (Aviron).

The newer picture is, at least, not lacking in star power or capable actors. Matthew McConaughey and Anne Hathaway head the bill playing emotionally scarred Iraq War vet Baker Dill and his ex-wife, Karen. In the aftermath of their breakup, Baker has found refuge on a remote tropical island where he works as a fishing boat captain.

Although his first mate, Duke (Djimon Hounsou), doubles as something of a friend, and despite the indefatigable nosiness of all the small isle’s inhabitants, Baker, who has more or less dropped out of life, pursues a contentedly isolated existence. In lieu of love, he carries on a strictly physical, though perfectly amiable, affair with wealthy cat lover Constance (Diane Lane), who assumes the role of sugar mommy when Baker’s funds run low.

Enter Karen, much to Baker’s surprise. Karen has gone to great lengths to track her former husband down (at this point we learn that Baker Dill is not his real name) in order to make him an offer. For the sum of $10 million, she wants Baker to dispose of her alcoholic and abusive second spouse, Frank (Jason Clarke), by taking him out on an excursion and feeding him to the local sharks.

Concerned for the welfare of his son, Patrick (Rafael Sayegh), who lives with the new couple, but distracted by his Capt. Ahab-like obsession with catching an elusive giant tuna, Baker wavers over whether to accept. Duke, who is shown to be an active member of his Catholic parish, offers sound moral guidance.

But then another newcomer, traveling salesman Reid Miller (Jeremy Strong), who has been chasing Baker since the beginning of “Serenity,” finally catches up with him and introduces a weird plot twist meant to upend audience expectations and perceptions.

Viewers’ artistic evaluation of writer-director Steven Knight’s work will largely depend on their reaction to this bold but dubious development — though there can be no question that Knight’s dialogue is laughably bad at times. As for morality, alas, the story moves through some very dicey portrayals of sexuality and relentless vulgar talk toward a conclusion wholly at variance with the weightiest scriptural norms.

PREVIOUS: Spicy ‘Mary Queen of Scots’ a tale of fiction, not history

NEXT: Authors inspire with 14 stories of world-changing moral leaders