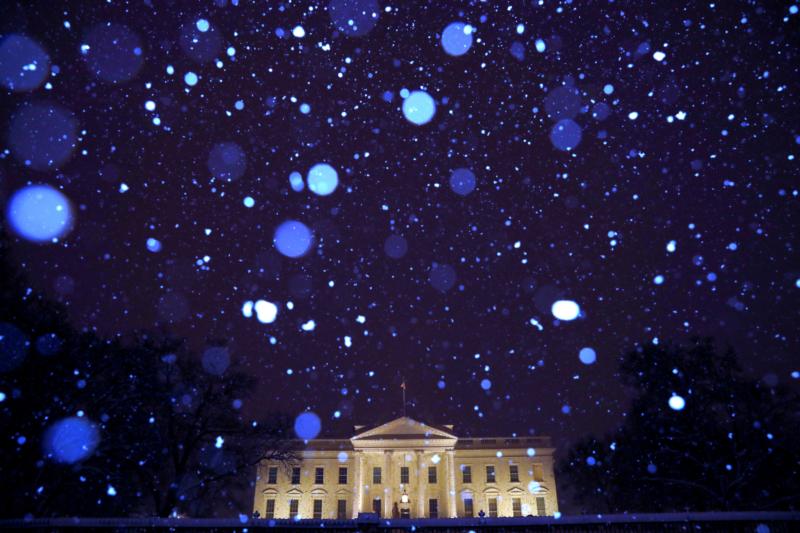 The White House is seen during a snowstorm in the early hours of Jan. 14. (CNS photo/Carlos Barria, Reuters)

UPDATED – WASHINGTON (CNS) — Two federal judges temporarily blocked the government from putting into effect new rules that would expand the exemption to the federal contraceptive mandate to the Little Sisters of the Poor and other religious employers.

The decisions came in cases filed in federal courts in Pennsylvania and California that challenged the expansion, arguing that allowing some employers to not offer contraceptive coverage in health insurance plans violated provisions of the Affordable Care Act.

Judge Wendy Beetlestone of the U.S. District Court for the Eastern District of Pennsylvania based in Philadelphia issued a nationwide preliminary injunction the afternoon of Jan. 14, the day the policy was to take effect.

Beetlestone’s 65-page ruling came less than 24 hours after Judge Haywood S. Gilliam Jr. of the U.S. District Court for the Northern District of California granted a preliminary injunction sought by 13 states and the District of Columbia to stop the rules from taking effect.

The decisions do not permanently block the new policy, but prevent the rules from taking effect while the legal challenges are debated in the courts.

The U.S. Catholic bishops said Jan. 15 that “freezing these common-sense regulations leaves those with conscientious or religious objections” to the contraceptive mandate “out in the cold. In a free country, no one should be forced to facilitate or fund things like contraception, sterilization, and abortion-inducing drugs and devices, which go against their core religious beliefs,” they said.

Becket, a religious liberty law firm representing the Little Sisters of the Poor, issued a media release immediately after Beetlestone’s ruling saying the religious order would continue to defend its religious rights by opposing the lawsuits seeking to block the rules.

“We never wanted this fight and we regret that after a long legal battle it is still not over,” Mother Loraine Marie Maguire of the Little Sisters of the Poor said in the release. “We pray that we can once again devote our lives to or ministry of serving the elderly poor as we have for over 175 years without being forced to violate our faith.”

Mark Rienzi, Becket president, expressed confidence that both rulings would be overturned on appeal.

“Government bureaucrats should not be allowed to threaten the rights of the Little Sisters of the Poor to serve according to their Catholic beliefs,” he said in the media release. “Now the nuns are forced to keep fighting this unnecessary lawsuit to protect their ability to focus on caring for the poor.”

Beetlestone ruled that the effort to expand the exemption while leaving in place other provisions for preventive care “is inconsistent with the … text” of the ACA.

Gilliam offered a similar explanation in his 45-page decision, determining that the new rules were “not in accordance with the Affordable Care Act.”

The religious order and the March for Life Education and Defense Fund were permitted to join the case as “permissive intervenors.”

The sisters have been in the spotlight for several years because of their moral objection to the Department of Health and Human Services’ requirement that most employers, including religious employers, cover contraceptives, sterilization and abortion-inducing drugs in their employee health plans. The mandate was put in place by HHS under the ACA during the Obama administration.

The Trump administration subsequently introduced rules in October 2017 to expand the exemption to religious employers and presented final rules in November.

The Little Sisters of the Poor, through their attorneys, said their rights under the Religious Freedom Restoration Act would be violated if they were forced to comply with the mandate as the law requires.

“We pray that this decision will be appealed and that future courts will respect the free exercise arguments of the Little Sisters of the Poor and so many others who simply seek the freedom to serve their neighbors without the threat of massive government fines hanging over their heads,” said the U.S. Catholic bishops’ statement.

Lori Windham, an attorney with Becket, told Catholic News Service Jan. 14 that the rules put forward by the administration were “sensible to protect religious freedom.”

Rienzi argued in favor of the rule Jan. 10 during a hearing in Philadelphia and flew cross country for a hearing Jan. 11 in federal court in Oakland, California.

Windham joined Rienzi in Pennsylvania to argue in support of the regulation. She said the pair told the court they believed the states have no right to challenge the regulation.

“They haven’t identified any woman who would be harmed by these rules,” Windham said. “The mandate lawsuits have been going on for a long time. The religious objects have gotten protection from the courts. So it’s pretty silly for states to show up now years later to all of a sudden say these people are going to be harmed.”

The decisions of both federal judges are separate from a similar case filed to oppose the October 2017 rules. The 9th Circuit heard oral arguments in that case in October.

California Attorney General Xavier Becerra and Pennsylvania Attorney General Josh Shapiro filed their cases days after the rules were introduced in 2017 and again soon after the final rules were introduced in November. They have argued that women would lose employer-sponsored contraceptive coverage, leading to “economic harm” to states as women turn to state-based programs or programs that are reimbursed by the state.

Becerra also argued that the HHS ruling providing the religious exemption violates constitutional amendments because it allows employers to use religious beliefs to discriminate against employees and denies women their rights to equal protection under the law.

California, Delaware, Maryland, New York and Virginia joined in the first suit. They were joined by Connecticut, Hawaii, Illinois, Minnesota, North Carolina, Rhode Island, Vermont, Washington, Virginia and the District of Columbia in the most recent suit that led to Gilliam’s decision.

The Little Sisters of the Poor, through their attorneys, said their rights under the Religious Freedom Restoration Act would be violated if they were forced to comply with the mandate.

Becket lawyers have argued all along that the government has many ways to provide services to women who need them as well as protect the Little Sisters: “Neither the federal government nor the state governments need nuns to help them give out contraceptives.”

PREVIOUS: All Americans urged to ‘stand together’ to reject religious bigotry