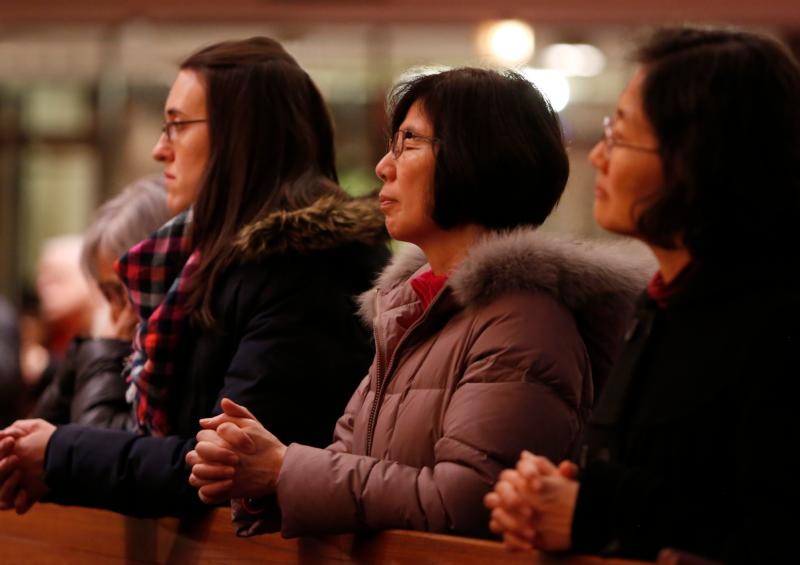 People pray after Communion Jan. 3 at St. Mother Theodore Guerin Parish in Elmwood Park, Ill. More than 70 turned out to support the U.S. bishops who are gathered at the Mundelein Seminary at the University of St. Mary of the Lake for a retreat to rebuild trust among the faithful as questions continue to revolve around their handling of clergy sex abuse. (CNS photo/Karen Callaway, Chicago Catholic)

CHICAGO (CNS) — To show support for the U.S. bishops as they gathered at the Mundelein Seminary at the University of St. Mary of the Lake near Chicago for a weeklong retreat in early January, members of lay ecclesial movements met at St. Mother Theodore Guerin Parish in Elmwood Park Jan. 3 to pray.

More than 70 people attended Mass and adoration at the parish as part of a larger effort of the 21 lay movements active within the Archdiocese of Chicago to support the bishops. Each group is taking a day to have its members pray during the bishops Jan. 2-8 retreat.

“We want to show them that we support them, that they are not alone in this,” said Renata Kaczor, co-chair of the archdiocesan committee for lay movements and a member of Domowy Kosciol (“Domestic Church”), dedicated to the sanctity of marriage. “We also want to ask God to help them, help us and everybody in the very difficult situation the church is going through now.”

Many lay ecclesial movements and associations have arisen within the Catholic Church, mostly in the 20th century. Movements active in the archdiocese include Focolare, Charismatic Renewal, Legion of Mary and Regnum Christi.

Talking about the bishops, Michael Sublewski, co-chair of the archdiocesan committee for lay movements and a member of Neocatechumenal Way, said: “I’m sure they feel very isolated and persecuted. We want them to know that we support them, and prayer is the best way to do that.”

“There’s nothing more diabolical” than the abuse of children by priests, said Lauretta Froelich of the Catholic Charismatic Renewal, “and yet Jesus told us that not even the gates of hell are going to prevail against his church.”

By praying for and supporting the church’s leaders, the lay movements are fulfilling their mission, Sublewski told the Chicago Catholic, newspaper of the Archdiocese of Chicago.

Froelich said that what the lay movements are doing is akin to what Capuchin Father Raniero Cantalamessa, the preacher of the papal household leading the bishops’ retreat, did after Pope John Paul II was elected. He stood in St. Peter’s Square beneath the windows of the papal apartment and cried out “Courage, John Paul! Courage!”

“I really think that’s what the lay movements are doing now, tonight and every day in the life of the church. We’re the ones who go out to the world and so we’re crying out to the priests and the bishops, ‘Courage!'” she said.

PREVIOUS: Atlanta nurse helps others while her own immigration status is in limbo