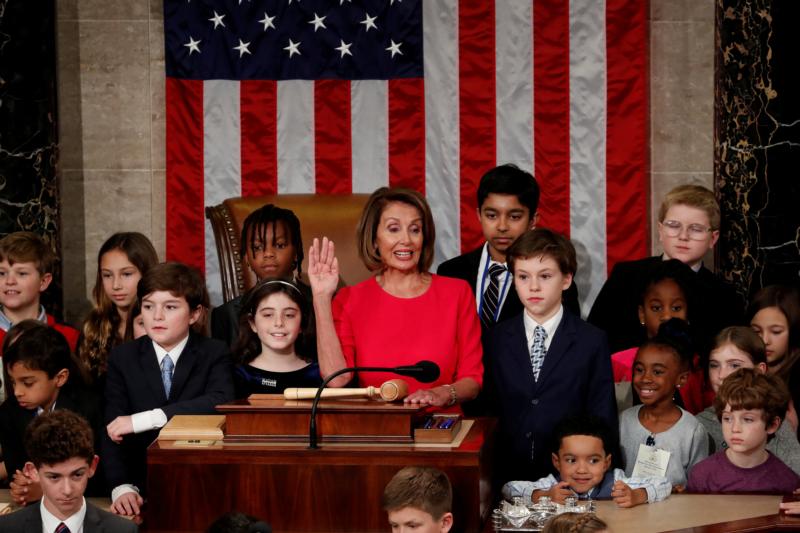 House Minority Leader Nancy Pelosi, D-Calif., a Catholic, is surrounded by children Jan. 3 as she is sworn in as House Speaker of the U.S. House of Representatives at the start of the 116th Congress inside the House Chamber on Capitol Hill in Washington. (CNS photo/Kevin Lamarque, Reuters)

WASHINGTON (CNS) — Did you get everything you wanted for Christmas? Thought not.

Neither did several Catholic organizations, despite the last-minute flurry of legislation typical of a lame-duck Congress.

Even though there’s still 300-plus days until Christmas comes around again, those groups have recalibrated their priorities in light of a new, divided Congress, with Democrats taking control of the House and Republicans slightly increasing their heretofore razor-thin edge in the Senate.

Much talk prior to Congress being seated Jan. 3 focused on a “Green New Deal,” a sweeping series of energy efficiency measures that has yet to be written.

The Catholic Climate Covenant hasn’t seen much under its tree from Congress in nearly a decade.

According to its executive director, Dan Misleh, the last bill Congress tried to pass was the cap-and-trade bill in the 2009-10 Congress, when Democrats had majorities in both chambers plus a president in the White House.

Since that bill failed, “there really hasn’t been much legislatively happening,” Misleh told Catholic News Service. The Obama administration’s way of dealing with environmental issues was with regulations, but “this administration is rolling a lot of that,” he said. “There really haven’t been a whole lot of initiatives at the federal level that they’re tackling.”

With reports late in 2018 from both the United Nations and the National Climate Assessment that “we’re not doing enough” on climate issues may provide urgency in Congress, Misleh said, “whether this is the legislative fix that we need is open to debate.” He added, “There’s certainly some cautions. How is this going to play out in the (congressional) arena? Who gets to take part in shaping the legislation? How much does it do to help poor people or harm people — a key Catholic question?”

Catholic Rural Life got a farm bill for Christmas — this time without any delays in shipping. It was the first time since George H.W. Bush was president that a new farm bill was enacted the same year the previous one was set to expire.

However, it didn’t come with everything Catholic Rural Life had sought. Still, noted James Ennis, its executive director, there are ways other than a farm bill to get rural America what it needs.

With two years of prep work and education among its members prior to the farm bill, “our hope right now,” Ennis said, is to “continue to keep attentive to the programs that are benefiting rural residents, farms, and having access to healthy food.” How farm bill provisions are implemented are also key, he added.

“There’s a lot of pressure on farmers right now, a lot of pressure,” and even more on smaller, family-run farms, Ennis said. “It’s a risky business. Always has been, but it makes it that much harder when prices are low. Catholic Rural Life is very aware of that, and it works with local parishes and pastors to address it from a pastoral standpoint. But there are policies that also can help — or not help — that situation,” he added. “I’m hopeful … some of that can be rectified this year.”

Sister Simone Campbell, executive director of Network, the nun-run social justice lobby, isn’t all that sad to see the Republicans lose one chamber of Congress. “What the Republican policies do is blame the people, not the system,” she said.

Items she’d like to see addressed include health care and voting rights. “We’ve got to fix up this election system that we have. Our election system is being undercut by scheming, conniving people who want to win without seeing the people getting into the system,” she said.

Sister Campbell also acknowledged the possibility of delayed gratification for some things she’d like to see under her tree. “We’ve got to raise the banner on immigration, but I don’t think this Congress is going to make a change,” she said. “I think I have to look toward 2020 to fix it.”

The stocking might not be quite so stuffed, either, for pro-life Americans, to hear Tom McClusky, President of March for Life Action.

“The last time Democrats were in power (in the House), there were 40 pro-life Democrats. Now there’s only two,” Reps. Bill Lipinski of Illinois and Collin Peterson of Minnesota, McClusky said.

“Actual pro-life issues is going to be tough this Congress. In the Senate, (confirming) judges will always be a key thing, but what we’re already seeing on Day One,” he noted Jan. 3, “we’re already playing defense with the president’s foreign and pro-life policies.”

Pro-lifers may have to content themselves with “some of the more obvious things that are on the peripherals of the pro-life movement,” such as “fighting against sex trafficking, promoting adoption. More bipartisan. We’ll certainly be looking for opportunities to do that,” McCluskey said. “I wish I could be more optimistic.”

On the flip side of that coin, Catholic Charities USA is looking to the art of the possible, according to Lucas Swanepoel, its vice president for social policy.

Catholic Charities representatives will meet with House and Senate leaders to figure out their priorities and how Catholic Charities’ priorities can mesh with theirs. Then, it’s on to the 90 new members of Congress in both houses. “Most Congresses you have anywhere between 30-50 new members,” Swanepoel said. “It’s going to be a very busy time for our team. I’ll be going to those meetings, sharing the load because there’s so many.”

Two items on Catholic Charities’ wish list are flood insurance reauthorization and disaster assistance.
For the former, “it’s critical if you’re in a flood plain and you’re low-income. You’re going to be more impacted by the consequences,” Swanepoel said.

As for the latter, Swanepoel wants to see low-income communities given greater priority. Currently, he said, “a disproportionate amount of the money will go toward Main Street, while low-income individuals are left behind and forgotten.”

But what Catholic Charities wants to get across to lawmakers is that they’re a ready resource. A Catholic Charities affiliate is active somewhere in each House member’s district. Moreover, Swanepoel said, “it’s key to our mission, frankly, the ability to build bridges between people and communities, but also between parties.”

NEXT: Jesuit to remain as House Chaplain in new Congress