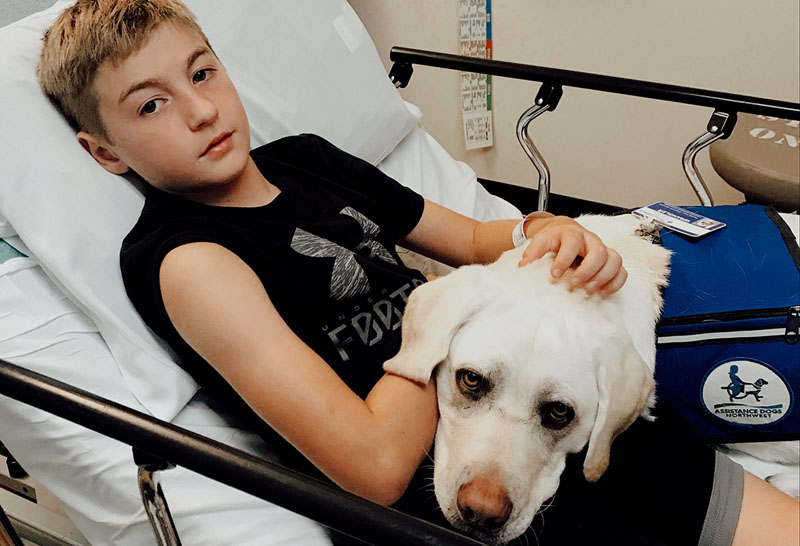 Chase Stansbury pets Wrangler at St. Vincent Medical Center in Portland, Ore., in this undated photo. The Labrador is the first full-time facility dog at the medical center, and his task is to offer comfort to patients in the children’s emergency room. (CNS photo/courtesy Providence Health and Services)

PORTLAND, Ore. (CNS) — Wrangler doesn’t have an MD and he can’t write prescriptions, but he works hard to help children who are injured or ill and often scared.

The Labrador is the first full-time facility dog at Providence St. Vincent Medical Center in Southwest Portland, and his task is to offer comfort to patients in the children’s emergency room.

“Kids come into the ER because of something (their) mom and dad can’t fix, and that’s very scary,” said child life specialist Teddie Garland, Wrangler’s handler. “They’re getting blood drawn, vitals taken, maybe they need stiches.” They also may be in pain.

“It’s a high-stress environment that kids don’t have any control over,” Garland said.

“Kids and teens are his favorite people,” said Garland. “If he hears a kid crying, he wants to go help.”

One day a child with a laceration on his knee was having an especially hard time. Garland said to the patient, “I can tell you’re really scared right now.”

The boy replied, “I think I’m going to die.”

Immediately, Wrangler leaned in toward the boy, gave him a nudge and looked up at him with his big brown eyes, as if to say, “You’re going to be OK.”

“There’s no command for that,” said Garland. “He reads a room and his intuition often trumps mine.”

Studies and observation show the physical and psychological benefits of animals. In the presence of a dog such as Wrangler, blood pressure and heart rate can drop. “Within 12 minutes of petting a dog, the body releases oxytocin,” said Garland. Sometimes called the “love hormone,” oxytocin plays a role in bonding and people’s sense of well-being.

Sitting in her office at St. Vincent, dog bed and water bowl nearby, Garland told the story of a 6-year-old boy who was recently admitted to the ER for a psychiatric issue.

“It was tough on him to be cooped up in a room and being told he couldn’t leave,” she recalled. Garland had the boy teach Wrangler a new command and take him for a walk around the room.

“Rather than feeling like everything was done to him, he got to feel like he was the expert at something,” she said.

Children often open up to the mellow Labrador, telling him concerns they haven’t shared with hospital staff.

“He does so many things that we human caregivers are not able to do,” said Garland. “He’s not judging them; he loves unconditionally.”

Korina Jochim is the clinical manager at Northwest Catholic Counseling Center in Northeast Portland and works primarily with children. She said the overwhelming nature of an ER visit can create post-traumatic stress disorder.

“Experiencing things that are warm and familiar, such as dogs, during that time can make the difference as to whether children get traumatized or not,” said Jochim.

Wrangler comes from 50 generations of service dogs and was bred and trained in Hawaii by the nonprofit Assistance Dogs Northwest. Training sessions begin when puppies are 8 weeks old.

Service dogs are paired with one person and help him or her with daily tasks, for example opening doors or picking up items. Guide dogs also fit this category. Facility dogs such as Wrangler receive extensive specialized training from an accredited organization and learn specific skills.

There also are therapy dogs, who need to have a good temperament but can be someone’s pet. They may, but don’t always, go through a certification program. Many hospitals have therapy dog programs, including St. Vincent.

Wrangler was trained for 18 months and mastered 90 commands. Training includes generalized instruction and specialized commands, like “snuggle,” based on where the dog will work.

“We are proud of Wrangler and all the work he’s doing,” said Goodfellow. “We hear so many wonderful stories about him.”

The Lab has a 40-hour workweek, though he’s been known to snooze on the job and receives more breaks than his two-legged co-workers. He lives at Garland’s home, sleeps on her bed and spends a lot of time playing.

St. Vincent, founded by the Sisters of Providence in 1875, offers Wrangler trading cards and a stuffed animal in his honor. He also receives fan mail from grateful patients.

He has also made a calming impact on the staff, said Garland.

“He’s been a part of staff debriefs, like after the loss of a child or a difficult, combative patient situation,” she said. “I’ve had nurses sit under my desk with Wrangler and needing his love.”

“He’s so comforting after a stressful day; I love him,” said Kasie Walker-Counts, a pediatric nurse who initially thought of Wrangler as just a cute mascot for the ER.

“Over the past year, I’ve seen him do some pretty incredible therapeutic things with kids who are really anxious,” Walker-Counts said.

“Kids tend to be animal lovers, and they will be petting Wrangler and without realizing it they are being soothed,” she said. “He’s adorable, but he also adds so much in an often terrible situation.”

NEXT: Catholic advocates outline legislative goals for a new Congress