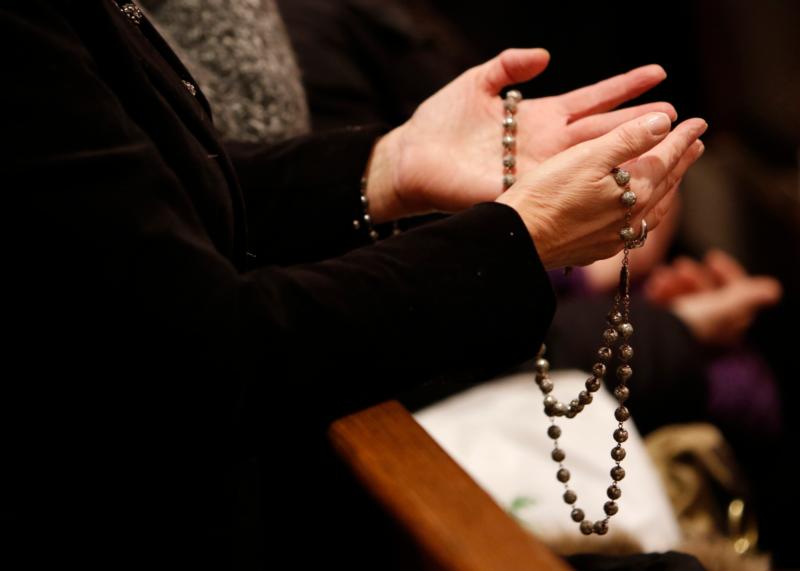 A woman holds a rosary while praying during a Holy Hour Jan. 22, 2019, at St. Patrick’s Cathedral in New York City. The service and Mass that followed it comprised a Prayer Vigil for Life marking the Day of Prayer for the Legal Protection of Unborn Children. Jan. 22 is the anniversary of the U.S. Supreme Court’s Roe v. Wade decision in 1973 that legalized abortion across the nation. (CNS photo/Gregory A. Shemitz)

NEW YORK (CNS) — On the 46th anniversary of Roe v. Wade, “a night when darkness claims the victory,” more than 500 people gathered at St. Patrick’s Cathedral to give thanks for the gift of life and pray for an end to abortion.

The Jan. 22 Mass and a Holy Hour that preceded it were timed to coincide with Gov. Andrew Cuomo’s signing of the Reproductive Health Act, legislation that effectively removed restrictions on abortion in New York.

The new act allows abortions to be performed by any licensed medical personnel throughout the duration of the pregnancy “when necessary to protect a patient’s life or health.”

Auxiliary Bishop Peter J. Byrne of New York was the principal celebrant of the Mass. Auxiliary Bishop James Massa of Brooklyn concelebrated with eight priests. The Sisters of Life organized the cathedral event, which drew a diverse cross section of New Yorkers. The Franciscan Friars of the Renewal provided music and reflection for the Holy Hour.

Father Richard Veras, director of pastoral formation at St. Joseph Seminary in Yonkers, New York, was the homilist. He characterized the Mass as one of penance for abortion and said it is important to stay close to “Mary, Our Lady of Mercy, Our Lady of Hope.”

Referencing Jesus’ words from the cross, Father Veras said, “This is a hard night to say, ‘Father forgive them for they know not what they do.'”

“The serpent thinks he leaves us in despair, but Jesus comes to us. … His mercy endures forever,” he concluded.

At the Mass, prayers of intercession asked for a conversion of heart for legislators and sought repentance for all laws that fail to protect children in the womb.

As the worshippers filed out of the warmly lit cathedral into the January chill, Mother Agnes Mary Donovan, superior general of the Sisters of Life, told Catholic News Service: “It’s tremendous to gather a crowd to pray together on a night like this to remind ourselves of our great purposes and that victory will come in the Lord Jesus.”

In a Jan. 22 statement, the New York State Catholic Conference said that with the new law — fully supported by Cuomo, a Catholic — “our beloved state has become a more dangerous one for women and their unborn babies.”

“Let us all pray for the conversion of heart for those who celebrate this tragic moment in the history of our state,” it said. “And we pray in a special way for the lives that will be lost, and for the women of our state who are made less safe under this law.”