Jesus’ love does not use labels, pope tells young detainees in Panama 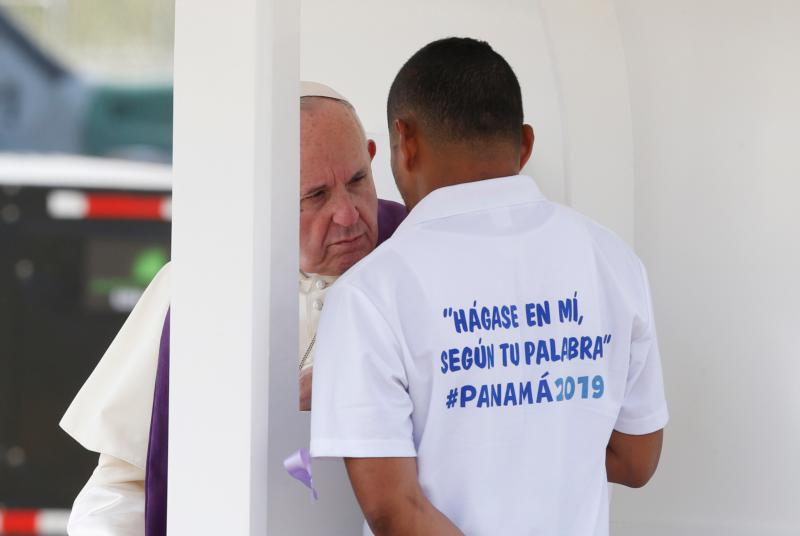 PANAMA CITY (CNS) — Just like the Pharisees, many today shun Jesus’ merciful love toward sinners and prefer to use labels that stigmatize a person’s past, present and future, Pope Francis said.

Speaking to young detainees at a penitential liturgy in Las Garzas de Pacora Juvenile Detention Center in Panama Jan. 25, the pope said society creates “an adjective culture” that prefers to immediately label people as good or bad rather than truly getting to know them.

“Gossipers are not interested (in the person). They quickly seek to put a label to get them out of the way. The adjective culture belittles the person,” he said.

Pope Francis traveled by helicopter to the industrial town of Pacora, 20 miles east of Panama City. Thousands of people lined the streets holding banners, balloons and flags welcoming the pope, who waved and smiled as he greeted them from his popemobile.

The detainees — wearing white World Youth Day T-shirts – chanted “Esta es la juventud del papa” (“We are the pope’s youths.”) Many wore rosaries around their necks or held them in their hands.

In a message sent to journalists, the Vatican said the pope’s drive around the neighborhood of Pacora was “a sign of closeness to the people who live in this periphery.”

Upon his arrival, the pope listened to the experience of Luis Oscar Martinez, a young man detained at the prison. Recalling his arrest and subsequent transfer to Las Garzas, Martinez said that, despite the situation, “something told me, ‘It isn’t over.'”

“In that moment,” Martinez recalled, “I understood that God my father was with me. And if I am talking to you right now, it is because of the grace and love of God and my beloved Christ.”

Sharing his hopes and dreams of one day becoming an international chef, Martinez expressed his gratitude to Pope Francis for visiting him and his fellow inmates.

“I would like to thank you because, as a servant of the Lord Jesus, you took the time to listen to a poor person deprived of freedom like myself. There are no words to describe the freedom I feel at this moment. Thank you for that,” he said.

During the penitential liturgy, the pope heard the confessions of five inmates — four young men and a young woman — in a small tent set up outside of the prison, the Vatican said. One of the young men was missing a leg and using crutches. He could not sit down, so the pope stood up to hear his confession.

In his homily, the pope reflected on the day’s reading from the Gospel of St. Luke, which recalled the criticism by the Pharisees against Jesus because “he receives sinners and eats with them.”

While the Pharisees intended to “discredit and dismiss” Christ, he explained, they instead point out Jesus’ “most ordinary yet distinctive ways of relating to others.”

“Jesus is not afraid to approach those who, for countless reasons, were the object of social hatred, like the publicans — we know that tax collectors grew rich by exploiting their own people and they caused great resentment — or like those who were called sinners because of the gravity of their faults, errors and mistakes,” the pope said.

The pope added that Jesus’ way of approaching and engaging others, even if it meant “putting his reputation at risk,” stood in stark contrast to the Pharisees’ “sterile, fruitless approach” of complaining and “blocking any kind of change, conversion and inclusion.”

This attitude, he continued, spoils everything, because it creates “an invisible wall that makes people think that, if we marginalize, separate and isolate others, all our problems will magically be solved.”

“When a society or community allows this,” he added, “and does nothing more than complain and backbite, it enters into a vicious circle of division, blame and condemnation.”

On the other hand, the pope continued, the Gospel characterizes the merciful approach of God who celebrates “when he sees his children returning home.”

This love “has no time for complaining” and “initiates a process capable of providing ways and means for integration and transformation, healing and forgiveness: a path of salvation,” he said.

Jesus, he said, breaks the mentality “that separates, excludes, isolates and falsely separates ‘the good and the bad,'” not with slogans or sentimentality but by “creating relationships capable of enabling new processes; investing in and celebrating every possible step forward.”

Through this approach, Christ also breaks the insidious whispers that haunt those who repent from their sin, that continue to tell them “You can’t do it,” which instills in them fear that they will never change, Pope Francis said.

“Friends, each of us is much more than our labels. That is what Jesus teaches us and asks us to believe,” the pope said. “His approach challenges us to ask and seek help when setting out on the path of improvement.”

Society, he added, can only be fruitful when it offers a path of inclusion and integration instead of relentless, negative and heartless campaigning against young men and women looking for a second chance.

“Keep fighting, all of you, to seek and find the paths of integration and transformation.” Pope Francis said. “The Lord will bless, sustain and accompany you.”

After the penitential liturgy, Alessandro Gisotti, interim director of the Vatican press office, said the pope was “visibly moved by this meeting” and that he wanted to “communicate to those young people that they are not alone and that they are not separated from God’s love.”

“I was able to speak a bit with the pope after this visit,” Gisotti told journalists. “And the pope told me this: ‘The most important message I wanted to give witness to today was the mercy of God and highlight that we are all in need of God’s mercy.'”

Emma Alba de Tejada, director of Las Garzas de Pacora Juvenile Detention Center, said among the five detainees whose confessions were heard was a young man who harbored anger over the death of his brother and wanted revenge.

“Today, when he finished his confession, he couldn’t stop crying,” Alba said. “He (finally) felt what he wanted to feel. He said, ‘I am transformed; I want to change and I will change.'”

“What the pope did today for our kids was spiritually great. It was what they needed: that he would remember that there are young people who had broken the law, who deserved that he would look at them and tell them, ‘I am here,'” Alba said.

NEXT: At lunch in Panama, U.S. pilgrim questions pope on abuse crisis