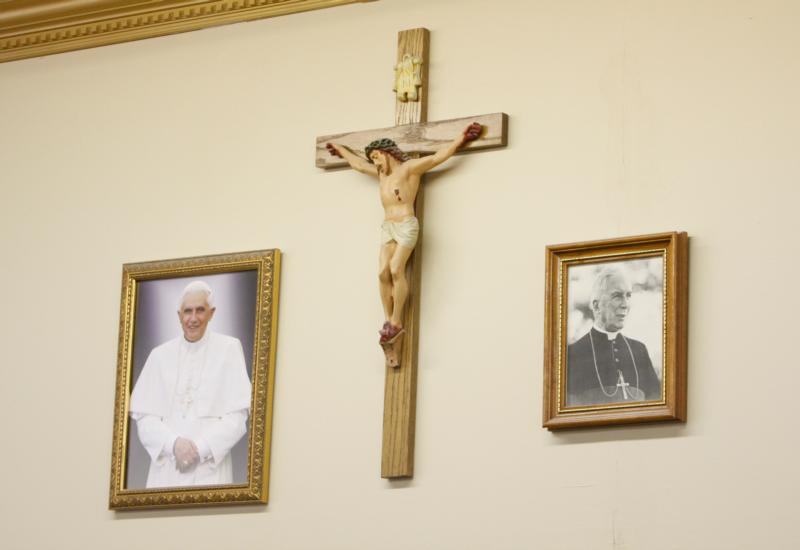 Portraits of Pope Benedict XVI and Archbishop Marcel Lefebvre, founder of the traditionalist Society of St. Pius X, flank a crucifix at St. Michael the Archangel Chapel in Farmingville, N.Y., in this Feb. 1, 2009 photo. Pope Francis has closed the pontifical commission responsible for traditionalist Catholics and turned over responsiblity for them to the Congregation for the Doctrine of the Faith. (CNS photo/Gregory A. Shemitz)

VATICAN CITY (CNS) — Pope Francis has closed the pontifical commission that had been responsible for the pastoral care of Catholics attached to the pre-Vatican II Mass, transferring the commission’s tasks to a special section of the Congregation for the Doctrine of the Faith.

And because the disputed issues at the heart of the Vatican’s ongoing talks with the traditionalist Society of St. Pius X “are mainly doctrinal,” the doctrinal congregation will take full responsibility for them, Pope Francis wrote in a document released by the Vatican Jan. 19.

St. John Paul II had established the Pontifical Commission “Ecclesia Dei” in 1988 to facilitate the “full ecclesial communion of priests, seminarians, religious communities or individuals until now linked in various ways to the fraternity founded by Msgr. (Marcel) Lefebvre, who may wish to remain united to the Successor Peter in the Catholic Church, while preserving their spiritual and liturgical traditions.”

St. John Paul also insisted that “respect must everywhere be shown for the feelings of all those who are attached to the Latin liturgical tradition.”

At the time, Archbishop Lefebvre was still alive and, despite St. John Paul’s warnings that he would be engaging in a “schismatic act,” the archbishop ordained four bishops without papal approval. The Congregation for Bishops issued a notice July 1, 1988, that Archbishop Lefebvre and the four new bishops incurred automatic excommunication.

Pope Benedict XVI in 2007 gave wide permission for the celebration of the “extraordinary” form of the Mass, that is, Mass according to the Roman Missal published in 1962 before the reforms of the Second Vatican Council.

And, less than two years later, Pope Benedict in 2009 lifted the excommunications imposed on the bishops ordained by Archbishop Lefebvre, saying the penalty had been imposed “with the aim of calling those thus punished to repent and to return to unity.” After 20 years, he said, “this goal has sadly not yet been attained,” but the remission of the excommunication “has the same aim as that of the punishment: namely, to invite the four bishops once more to return.”

In addition, because the questions being handled by the Ecclesia Dei commission are “mainly doctrinal” today, it makes sense to entrust them to the Congregation for the Doctrine of the Faith.

Andrea Tornielli, editorial director of the Vatican Dicastery for Communication, said the staff of Ecclesia Dei would become the staff of the new section in the doctrinal congregation.

Pope Benedict’s decision to lift the bishops’ excommunications and to extend the use of the extraordinary rite, and Pope Francis’ decision to give priests of the Society of St. Pius X faculties to hear confessions and officiate at weddings mean that doctrinal differences over the teaching of the Second Vatican Council remain “the only issue still open, though it is also the most important,” Tornielli wrote for Vatican News.

The SSPX in July elected Italian Father Davide Pagliarani as its new superior general. Tornielli said the new leaders “have announced their desire for further discussions with the Holy See regarding the texts of the Second Vatican Council: a delicate issue which will be addressed by the prefect of the Congregation for the Doctrine of the Faith.”