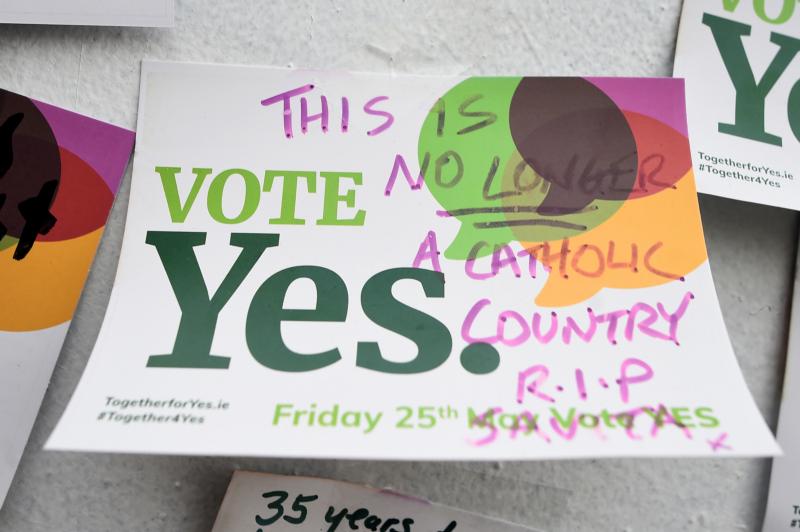 A message about abortion is seen in Dublin, Ireland, May 27, 2018. The primate of All-Ireland insisted that the country’s new abortion law that took effect Jan. 1 has “no moral force” and it “must be resisted” by Catholics. (CNS photo/Clodagh Kilcoyne, Reuters)

DUBLIN (CNS) — The primate of All-Ireland insisted that the country’s new abortion law that took effect Jan. 1 has “no moral force” and it “must be resisted” by Catholics.

Archbishop Eamon Martin of Armagh, Northern Ireland, who also is president of the Irish bishops’ conference, said in a message to mark the legislation that the new law “in good conscience cannot be supported.”

“In a May 22 referendum, voters opted by a margin of 2-1 to lift the country’s constitutional protection of the right to life of unborn children. The new law will permit abortion on demand up to 12 weeks’ gestation. It also will permit abortion up to 24 weeks on unspecified grounds for the health of the mother, and up to birth where the child is diagnosed with a life-limiting condition that means he or she may not live long after birth,” he said.

Archbishop Martin urged Catholics to “continue to call and work diligently for its limitation, amendment and repeal.”

A small group of demonstrators gathered for a symbolic protest outside the Irish parliament in Dublin Jan. 2. Ruth Cullen, spokeswoman for the Pro-Life Campaign, said that the protest stressed that the campaign to overturn the law continues.

“The pro-life movement is deeply saddened at what has happened to our country and about the loss of life that will inevitably result from this unjust law,” she told those gathered.

“We will fight on peacefully but ceaselessly to expose the lies that were told during the referendum campaign and we look forward to a brighter day at some point in the future when unborn babies in Ireland will once again be welcomed in life and protected in law,” Cullen said.

Bishop Kevin Doran of Elphin told Massgoers in his New Year message that Catholic politicians who had advocated for abortion had “chosen a position which is clearly out of communion with the church.”

“There is no point in pretending otherwise,” he said.

Elsewhere, Bishop Brendan Leahy of Limerick appealed to politicians to ensure that women experiencing a crisis pregnancy do not feel that abortion is their only option.

“Regardless of what way anyone voted and the reasons people had for voting as they did, it now behooves all to do our part to make sure that abortion is not the default response that characterizes people in Ireland when crisis pregnancies arise,” the bishop said.

“As a society, we need to recognize that while legislation now provides for abortion, it is not primarily what we want. Our moral compass must steer us in an entirely different direction. We must think of the possibilities of life and the love it brings,” he continued.

“We cannot let the child be swept away lightly when making these hard decisions,” he said.

Bishop Leahy also criticized the limited right to conscientious objection in the new legislation. Doctors and other health care professionals will not be obliged to perform abortions, but the law does say they are committing an offense if they do not refer a woman who wants an abortion to another physician who will provide the termination.

He said the absence of more stringent protections for conscience was “outrageous” and called for the legislation to be amended to strengthen such protections.

“Forcing them (doctors) not to choose life would be a most inglorious watermark for this country,” he said. “It goes against the deeper demands of our common humanity to force anyone to do so.”