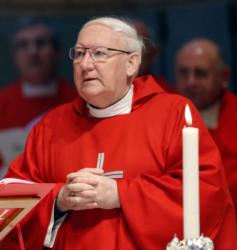 Bishop Brian Farrell, secretary of the Pontifical Council for Promoting Christian Unity, is pictured in a 2017 photo. (CNS photo/Giampiero Sposito)

VATICAN CITY (CNS) — Despite some new tensions, “practically the whole of Christianity is in a process of advancing beyond the controversies and competition of the past, toward greater understanding, trust and solidarity,” said Bishop Brian Farrell, secretary of the Pontifical Council for Promoting Christian Unity.

Writing in The Tablet, a London-based international Catholic weekly, Bishop Farrell said, “Pockets of mutual rejection and contention remain, but most of the world’s Christians have come to recognize one another as brothers and sisters in Christ, united in a common baptism and giving a common witness in serving the needs of suffering humanity.”

The bishops’ article was published Jan. 24 during the Week of Prayer for Christian Unity.

To illustrate how “not all is plain sailing” in the search for Christian unity, Bishop Farrell pointed to the challenges posed by a dispute within Orthodoxy over the question of authority and by a controversy within the Catholic Church over allowing the husband and wife in a Catholic-Protestant marriage to receive Communion.

The tensions within the Orthodox Church, particularly between the Ecumenical Patriarchate of Constantinople and the Russian Orthodox Church over the ecumenical patriarch’s recognition of the independent Orthodox Church of Ukraine, have implications for the Catholic-Orthodox dialogue as well, the bishop said.

“Beyond any political considerations involved, the fundamental point in question is whether the Ecumenical Patriarchate by itself has the authority to do what it has done,” Bishop Farrell wrote. “The Russian church has roundly rejected that claim, even accusing Patriarch Bartholomew of wanting to be a pope over all of Orthodoxy. The Russian claim is that there is no universal primacy over the whole church, only independent local churches gathered in a communion of faith, grace and brotherhood.”

That claim, the bishop said, would seem to indicate that agreed statements by the official Catholic-Orthodox dialogue on the role of primacy in the universal church “are far from received and accepted.”

“Whether and how the dialogue commission can effectively and usefully continue its work in the present situation is now an impelling question,” he wrote.

On the Catholic side, he said, “a crucial test of ecumenical resolve” resulted from the debate over a plan by the Germany’s Catholic bishops to make it easier for the Protestant spouses of Catholics to receive Communion with their husband or wife.

In the end, Pope Francis asked the German bishops to shelve the plan until they could reach a fuller consensus on it.

Normally, Bishop Farrell wrote, “the sacraments should only be administered to those in full communion with the celebrating church,” but the church can and has recognized that “certain situations constitute a call on her to offer the means of holiness and salvation to other baptized Christians, not her own members.”

Current church law permits sacramental sharing in cases of “grave need” when it is clear the person receiving the Eucharist shares a “Catholic faith” that it is Christ’s body.

Many Catholics, including several prominent German bishops, felt being in an interchurch marriage did not constitute a “grave need.”

Bishop Farrell said, though, the debate and eventual suspension of the plan had ecumenical repercussions as well because “in the eyes of many ecumenical partners, too, the debate gave the impression of a new ‘closure’ on the part of the Catholic Church.”

But the work and prayer for Christian unity made strides in 2018 as well, he said, citing Pope Francis’ visit to the World Council of Churches, the dialogues the Catholic Church is involved in, the dialogues other Christian churches are pursuing and, especially, the “dialogue of life and love” conducted by many Christians of many denominations.

“For centuries the divided Christian churches used their differences to affirm their identity over against one another,” Bishop Farrell said. “Consequently, the very idea of working together was practically unthinkable.”

Now, not only are Christians working together to serve the poor, he said, they also are adopting “a new mindset in which legitimate differences of doctrinal formulation and liturgical and canonical tradition and practice are acknowledged and esteemed and, therefore, seen not as a denial of what we are but as gifts that complement us.”

The bishop said a “turning point in the ecumenical quest” could be reached when — as Pope Francis said Jan. 18 — Christians realize it is “a grave sin to belittle or despise the gifts that the Lord has given” to other Christians and instead acknowledge their value.

NEXT: Jesus’ love does not use labels, pope tells young detainees in Panama