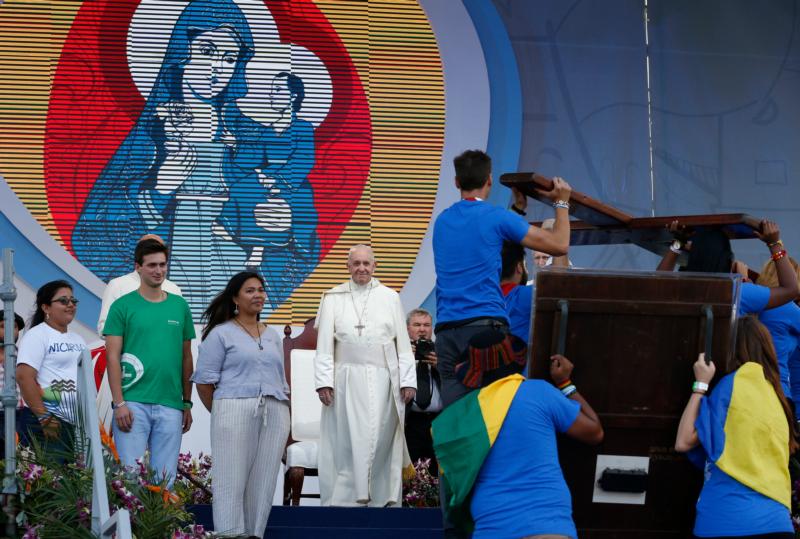 PANAMA CITY (CNS) — Young men and women in the church can bring the joy of the Gospel to the world by showing that God’s love extends to all people and excludes no one, Pope Francis said.

“By your actions and your approach, your way of looking at things, your desires and above all your sensitivity, you discredit and defuse the kind of talk that is intent on sowing division, on excluding or rejecting those who are not ‘like us,'” the pope said Jan. 24 during the official ceremony welcoming him to World Youth Day in Panama.

Arriving at the site, which sat along the picturesque Panamanian coast overlooking the Pacific Ocean, the pope was welcomed by an estimated 250,000 young people enthusiastically waving their country’s flags as the popemobile passed.

Five young people, representing each of the five continents present at the gathering, greeted the pope. Taking those near him by the hand, Pope Francis walked toward the main stage as young people processed, carrying the World Youth Day cross.

Interspersed with festive music and dancing, the opening ceremony celebrated the universality of the church as young people dressed in the traditional outfits of their native countries entertained the multitude.

Young people from Panama presented the pope with a stole made of “mola,” a handmade textile form featuring ornate designs that are part of the indigenous Guna people of Panama.

In his speech, the pope thanked the young people for coming to Panama and encouraged them to be better witnesses of the Gospel.

While World Youth Day is usually marked by festive celebrations, its goal is not to “create a parallel church that would be more ‘fun’ or ‘cool,'” the pope said.

“That way of thinking,” he said, “would not respect either you or everything that the Spirit is saying through you.”

Instead, the pope continued, World Youth Day is an opportunity to reawaken “the church’s constant freshness and youth” that happens only by listening and sharing with others as well as by serving others.

Acknowledging the difficulty many young men and women faced in making the journey to Panama, Pope Francis said it mirrored the life of a disciple who “is not merely someone who arrives at a certain place, but one who sets out decisively, who is not afraid to take risks and keeps walking.”

In making the sacrifices that allowed them to participate in World Youth Day, he added, young people have become “true teachers and builders of the culture of encounter.”

Their example, he continued, teaches that the culture of encounter “does not mean having to look alike, or think the same way or do the same things, listening to the same music or wearing the same football jersey.”

Instead, young people can teach the world that the culture of encounter is built by a shared dream, “a great dream, a dream that has a place for everyone.”

It is “a dream named Jesus, sown by the Father in the confidence that it would grow and live in every heart,” he said. “A dream running through our veins, thrilling our hearts and making them dance whenever we hear the command: ‘that you love one another; even as I have loved you, that you also love one another. By this all men will know that you are my disciples, if you have love for one another.”

Citing the words of St. Oscar Romero, Pope Francis reminded the young pilgrims that Christianity is not merely “a collection of truths to be believed, of rules to be followed or of prohibitions. Seen that way, it puts us off.”

“Christianity is a person who loved me immensely, who demands and asks for my love. Christianity is Christ. It means pursuing the dream for which he gave his life: loving with the same love with which he loved us,” the pope said.

Like Mary, who was asked by the angel Gabriel if she wanted to bear the son of God in her womb, the pope said young people are still asked today if they are willing to bear Christ’s love in their hearts.

The result of World Youth Day will not be a final document or a program, he said, but rather each young person returning home with “the new strength born of every encounter with others and with the Lord” to keep love alive and not let it “grow cold in the heart of our world.”

“Wherever we may be and whatever we may do, we can always look up and say, ‘Lord, teach me to love as you have loved us,'” Pope Francis said.