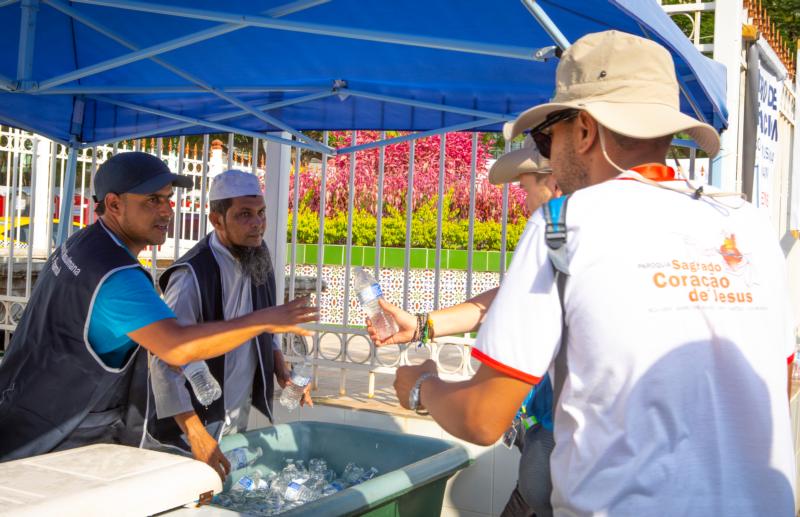 Muslims from Jumma Mosque in Panama City hand out complimentary cold bottles of water to World Youth Day pilgrims waiting to get into a welcoming ceremony with Pope Francis Jan. 24, 2019. (CNS photo/Chaz Muth)

“Brothers, sisters, you need water,” Hashim Bhana yelled at them from under a tent that announced a “hydration center” outside the mosque, a place where pilgrims could pick up free water, or catch some needed shade and a smile as they struggled to stay hydrated under the blazing sun.

“This is an event for the good of young people, it benefits them so how could we say no” to helping them, said Bhana.

While hundreds of vendors sold water to the thirsty, the Muslim community at the oldest mosque in Panama City gave it away for free near a banner that said, “Welcome Pilgrim Friends.” By the time Pope Francis had arrived at Santa Maria la Antigua Field, they had handed out 15,000 bottles and were looking for more because of the demand, said Bhana.

In Panama City, people of different religions get along well, he said, so the gesture was not unusual.

“What’s important to us is that we’re all brothers and sisters. We don’t ask about your religion, your skin color, age. We’re all humans and we want everyone to be well,” said Kasim Bhana, who was helping distribute water.

Having the pope in Panama City is a blessing, he said, adding that the Muslim community would be providing free water until World Youth Day was over, particularly because the venues for many of the events were near the mosque and they did not want the pilgrims to dehydrate or suffer.

The mosque has about 8,000 members, give or take, said Kasim Bhana, and many were taking turns staffing the water stations during the hottest times of the day. Others bought and delivered water and ice to keep the water bottles cold. But on the day the pope was going to be closest to the mosque, they opened earlier.