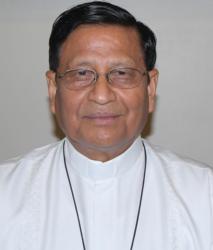 Cardinal Charles Maung Bo of Yangon, Myanmar, pictured in a Jan. 7 photo, will continue his focus on conflict resolution as he steps into the presidency of the Federation of Asian Bishops’ Conferences. (CNS photo/Michael Sainsbury)

YANGON, Myanmar (CNS) — Cardinal Charles Maung Bo of Yangon will continue his focus on conflict resolution as he steps into the presidency of the Federation of Asian Bishops’ Conferences.

Cardinal Bo was elected in November to replace India Cardinal Oswald Gracias of Mumbai, who has headed the organization since 2010. Cardinal Bo’s term is three years.

“Cardinal Gracias asked me so I had to consider it; I don’t have too much international experience, but I accepted, as we all must do our bit and knowing my own limitations,” Cardinal Bo told Catholic News Service during an interview in his residence in Yangon Jan. 7.

“I want to get all the different commissions and offices (of the FABC) together so we can focus on issues of peacebuilding in Asia, where there is conflict and disagreement. The aim is peace with triple dialogue: dialogue with government, with the poor, interreligious dialogue.”

Internal conflict is on the rise across Southeast Asia. Much of it is sectarian in nature, including in Myanmar, India, Sri Lanka, Pakistan, Thailand, Philippines and Indonesia.

Civil wars in Myanmar’s peripheries have plagued the nation once known as Burma since it gained independence from Great Britain 1948. Ethnic-based militias have waged battles with the military, who ruled the country by junta from 1962 to 2011 and then headed its government before the November 2015 election.

In recent years, the main trouble spots have been in the north. Beginning in 2011, after 17 years of relative peace, the Kachin Independence Army and other smaller ethnic militias resumed a civil war with the Myanmar military; the conflict escalated significantly during 2018. Initially, about 120,000 Muslim Rohingya people fled to displacements camps, where they remain today. But in August 2017, many Rohingya people began fleeing western Rakhine state as the military executed a concerted program of documented destruction of entire villages, murder rape and torture; since then more than 700,000 have fled to makeshift refugee camps across the border in Bangladesh, with no solution in sight.

In his 2018 Easter message, which he reiterated throughout the year, Cardinal Bo said: “Conflict has mutilated this country. Nearly 3 million of our youth are out (working offshore), a million are displaced, a million have fled the country as refugees. This was once a golden land blessed with great wealth. Our wounds are self-inflicted wounds. Refusing to accept the multicultural nature of this country has brought ethnic conflicts.”

Still, Cardinal Bo has continued to support Myanmar’s civilian leader, Aung San Suu Kyi, despite growing criticism from Western nations, nongovernmental organizations and the United Nations for her inability to prevent a tragedy that has been variously labeled as “ethnic cleansing” and even “genocide” and her long periods of studied silence. As more knowledgeable commentators have noted, Aung San Suu Kyi is in an awkward position: While nominally head of the government in her role of state counselor, she is forced to share power with the military, which retains the control of defense, border control and home affairs, including police.

Twice, Cardinal Bo has invited the interreligious Religions for Peace organization to meet in Myanmar. Now the group, which includes the country’s four major religions, is coordinating efforts with the military and the civilian National League for Democracy.

His efforts on conflict aside, Cardinal Bo’s other signature initiative is the drive to reclaim religious schools confiscated by the junta in 1965.

“We want to get some of the schools back, particularly those that are not being used for educational purposes and that have been taken over in some instances by certain business organizations,” Cardinal Bo told CNS.

“We have not yet proposed that formally; when I asked the minister for education in November, we asked whether it was possible to return some of the schools, but he sort of avoided the discussion. But once we present this officially sometime during this year, it can be discussed in the parliament.”

He noted that education in Myanmar is “still a problem and we are trying to open the door for private schools.”

He said the church has opened several diocesan schools around the country in new premises “and the Jesuits are running, together with Yangon diocese, the Campion Institute for English Language in Yangon; there are now 300-400 students there” as well as an institute of higher studies in central Myanmar.