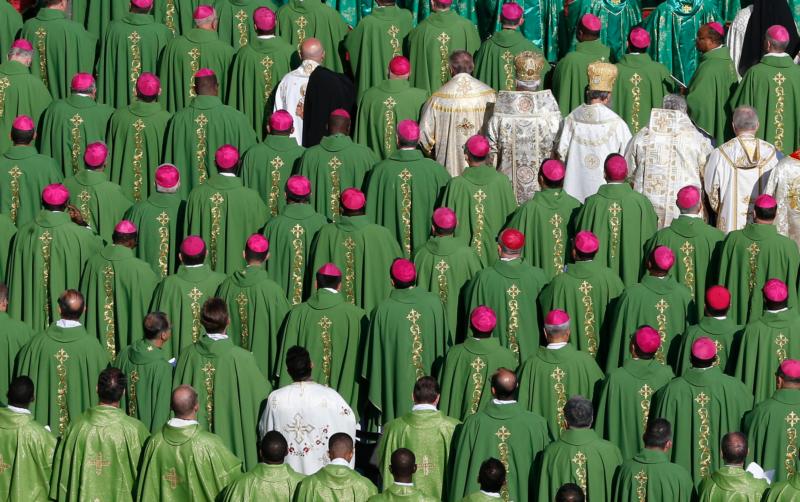 Bishops and priests attend the opening Mass of the Synod of Bishops on young people, the faith and vocational discernment at the Vatican in this Oct 3, 2018, file photo. The heads of the world’s bishops’ conferences and top representatives of religious orders are scheduled to meet Feb. 21-24 at the Vatican to discuss how to respond to sexual abuse. (CNS photo/Paul Haring)

VATICAN CITY (CNS) — The aim of Pope Francis’ February meeting on abuse and safeguarding is to clarify and underline what must and must not be done with allegations and make sure no more cases are ever covered up, said Andrea Tornielli, editorial director for the Vatican Dicastery for Communication.

“The presence of bishops from all over the world, called together for the first time to address this painful plague which has been, and is, a source of enormous suffering for victims and of counter-witness to the Gospel, will help to increase everyone’s awareness of the seriousness of the crisis,” he said.

The abuse of minors and vulnerable adults, “the horrific experiences of the victims, the procedures to be applied in the face of accusations and the indications to ensure a safe environment for children and young people will thus be examined from a perspective that is not solely European or American,” Tornielli said about the Feb. 21-24 meeting, which will bring presidents of the world’s bishops’ conferences, the heads of the Eastern Catholic churches and leaders of religious orders to the Vatican.

“The purpose of the meeting is very specific: to ensure that everyone taking part in it can return to their own country being absolutely clear about what must — and must not — be done with regard to addressing these cases,” he said in an editorial published Jan. 10 on Vatican News and on the front page of the Vatican newspaper, L’Osservatore Romano.

The bishops will discuss “what steps must be taken to protect the victims, with respect for the truth and the people involved, in order to ensure that no more cases are stonewalled or covered up.”

Many “significant and concrete steps have been taken” the past 16 years, he wrote, and “rules on how to respond have been established and strengthened by the will of recent popes.”

“But norms, laws, codes and procedures that are increasingly perfected and precise are not enough; they can never be enough if the mentality and the hearts of those who are called to apply them do not change,” he said.

That is why Pope Francis continues to emphasize the need for conversion and why “it is important that each of the participants in the meeting listen to the testimonies of surviving victims,” just as Pope Benedict XVI and Pope Francis have done. “Both of them, in the last 10 years and in various parts of the world, have met with victims, listened to them, and wept with them, sharing their suffering,” Tornielli said.

Pope Francis, he noted, has said the February meeting will seek “to make past mistakes opportunities for eliminating” the scourge of abuse “not only from the body of the church but also from that of society.”

PREVIOUS: Vatican leaps into the world of sports