A matter of taste: Doing a deep dive into fast-food fish sandwiches 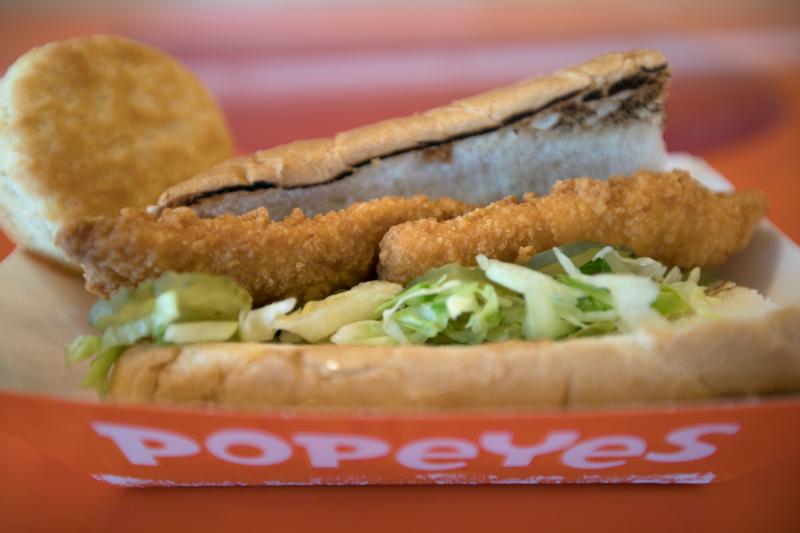 Popeyes is one of several fast-food chains that serve fish sandwiches where Catholics can dine during Lent. (CNS photo/Bob Roller)

WASHINGTON (CNS) — Man does not live on bread alone. But on Ash Wednesday and the Fridays of Lent, he’d better not add meat to the menu.

To help Catholics observe Lenten abstinence rules, any fast-food restaurant worth its salt — and sodium is in abundance at those places — offers a fish sandwich on its menu, and starts airing TV commercials for them.

So what is the fish sandwich landscape like? I decided to find out.

I tried to keep the rules simple. The sandwich had to come from a fast-foodery with a national profile, but within a reasonable driving distance of Washington; sorry, White Castle. And I had to be able to stand up to order it and sit down — even if it’s in my car — to eat it. Further, no tuna subs and the like; the fish has to be cooked. Also, no fries or other menu items. I saw the documentary “Supersize Me,” and don’t want that to happen to me. The only accompaniment was a bottle of water to wash it down.

Some may consider this odyssey as an advance Lenten penance.

Here’s what I found. Sandwiches are listed in order of preference. Your results may vary. Nutrition information from www.fastfoodnutrition.org.

Who knew that the first sandwich I tested would be the best? But it’s also the most, er, meaty, with three filets plus the nub of a fourth on something resembling a hoagie roll. It’s substantial, that’s for sure, and fairly tasty, too. Adorned only with lettuce and a not-that-spicy form of mayo. (460 calories, 29 grams fat, 65 milligrams cholesterol, 27 grams carbohydrate, 21 grams protein.)

I may have been spoiled by its Cajun Fish sandwich, but this wasn’t quite as terrific. It’s still heads and fins above the rest, though. Too many popcorn shrimp to count, unless you let all of them fall outside the faux-hoagie roll. The roll, lettuce and sauce are the same as with the Cajun Fish. While flavorful, there’s not as much spice as in the Cajun Fish offering, and it costs more. (680 calories, 41 grams fat, 65 milligrams cholesterol, 61 grams carbohydrate, 16 grams protein.)

During the last decade or so that my mother lived in the house where I grew up, there was a Long John Silver’s across the street. Many a time would I be dispatched to fetch a convenient meal. But that was before the age of fish tacos. Long John Silver’s doesn’t stray much from its formula for this menu item. There’s a deep-fried fish filet surrounded by a soft flour taco. The only thing that falls out is some of the finely chopped coleslaw that serves as the glue. It’s the lightest of the fish sandwiches tested, and the lightest on the wallet, too, and that’s a plus in my book. (410 calories, 21 fat grams, 35 milligrams cholesterol, 40 grams carbohydrate, 13 grams protein.)

I’m always gratified to see a fish sandwich that looked like fish. It’s a bigger sandwich, with a bigger fish filet, than the Long John Silver’s fish taco, and a much breadier, split-top roll to confine it. Four pickle slices are what gives it added zest; the mayo, or white sauce, inside was sparse. I was offered a packet of tartar sauce but I declined. I figure it’s better to judge these entries as made in the kitchen. But for those who judge it needs extra moisture, there’s also malt vinegar and hot sauce on a side counter, plus pumps for ketchup, mayo and barbecue sauce. (400 calories, 16 grams fat, 30 milligrams cholesterol, 40 grams carbohydrates, 14 grams protein.)

A sandwich defined by the bread that surrounds it? OK, I’ll bite. (Sorry, couldn’t resist.) In truth, the untoasted bread indeed has a distinct aroma and taste. But what really sells this sandwich is its heft. It tastes good from the first bite to the last. There’s a lot of dressing, more than anyone else’s save McDonald’s, plus a tomato slice and shredded lettuce. File under: Yummy. (690 calories, 34 grams fat, 105 milligrams cholesterol, 74 grams carbohydrate, 25 grams protein.)

There wasn’t much, if any, change in size over the dollar-cheaper Cajun Fish sandwich. There were two breaded catfish filets, but this is a definite step behind Popeyes other two offerings. I accepted the counter clerk’s offer to have some tartar sauce put on the sandwich rather than giving it to me separately. Tasty, yes, but still dry. And the first one to admit it contains trans-fat — 2 grams’ worth. (800 calories, 51 grams fat, 75 milligrams cholesterol, 59 grams carbohydrates, 30 grams protein.)

Like its compatriot sandwich, the Arby’s Cajun Fish Sandwich, it’s part of a mix-and-match limited-time two-for-$5 offer. “We have the meats,” proclaims Arby’s motto. Well, they’ve got the fish, too, which I wouldn’t have known unless I paid attention to the TV ad. In the ad, the fish looks longer than the bun. In reality, it’s true — but the fish isn’t as deep as the bun, either. The crispy fish version wins by a fair margin. Its crispiness is genuine, and it’s feels good in your mouth, and goes down satisfyingly. (570 calories, 25 grams fat, 45 milligrams cholesterol, 65 grams carbohydrate, 20 grams protein.)

The other fish-based sandwich in the Arby’s two-for-$5 sale. It looks quite similar to the Crispy Fish. Both are pollock, “wild-caught,” Arby’s says. It’s a shade darker than its crispy brother, not nearly as crispy, and the “Cajun” seems to come in the sauce spread over the bun. It’s not strong at the start, but it picks up some heat the more you eat. Both feature a lot a shredded lettuce, and a lot more would fall out if the sauce wasn’t pasted onto it. (590 calories, 29 grams fat, 45 milligrams cholesterol, 63 grams carbohydrate, 20 grams protein.)

If one fish filet is good, shouldn’t two be better? Here, the answer is yes. And for just a buck more than the original Filet-O-Fish. There is plenty of tartar sauce on this sandwich — so much so that it got on the outside of both buns. But it’s a satisfying sink-your-teeth-into taste. It all depends on whether you want to practice thrift by getting twice as much fish for far less than twice the cost, or practice economy and self-abnegation by sticking with the original. (540 calories, 26 grams fat, 80 milligrams cholesterol, 48 grams carbohydrate, 28 grams protein.)

Once considered the gold standard, the original Filet-O-Fish is still better than its square-patty brethren elsewhere. But it’s been surpassed by many other fast-food joints’ entries, as evidenced here. If a second fish patty still nets McDonald’s a profit at just one dollar more, then why are we paying $3.39 for a bun, a slice of American cheese and a gob of tartar sauce? (379 calories, 20 grams fat, 43 milligrams cholesterol, 35 grams carbohydrate, 15 grams protein.)

Cod was the fish of choice for the Booster Club’s weekly Lenten fish fries at my boyhood parish. I don’t know if it came from the North Pacific; all I know is that it came in a box, frozen. Wendy’s version, a seasonal item in my neck of the woods, isn’t all I thought it would be. The cod has flavor, but not a lot. There’s one big leaf of iceberg lettuce instead of shredded lettuce, and mayo (or a mayolike substance) on the inside of one bun. The Coalition of Immokalee Workers, which has pushed a Wendy’s boycott since 2016 for not signing a pledge that promotes tomato pickers, may be pleased to know there’s no tomato in this sandwich. (440 calories, 21 grams fat, 40 milligrams cholesterol, 46 grams carbohydrate, 17 grams protein.)

Gone is the Whaler, the alliterative seafood companion to the Whopper — maybe because BK didn’t want anyone to think they were eating a whale. But if you ate this a day after eating the Popeyes fish sandwich like I did, you’d blubber too. About the only thing this does well is put one square slab of fish between two round buns. A little smear of mayo or tartar sauce on both sides to keep the lettuce from falling off. Unremarkable, and disappointing given the price. (510 calories, 28 grams fat, 30 milligrams cholesterol, 51 grams carbohydrate, 18 grams protein.)

I have to give an honorable mention to the grilled cheese sandwich from Johnny Rockets. While there’s no fish in it — it evokes memories of a simpler time — even it you have to pay $5.59 plus tax for the privilege. It’s also a reminder that, while fast-food places have doubled down on their burger offerings, they do offer other, plausibly more healthful, items that you can buy at Lent, or any other time of the year. (710 calories, 41 grams fat, 110 milligrams cholesterol, 50 grams carbohydrate, 36 grams protein.)

Anyone thinking these reviews are tongue-in-cheek, well, they’re right. How else are you going to chew and swallow?

Editor’s note: For that other meatless favorite, the grilled cheese sandwich, check these Philadelphia-based establishments:

PREVIOUS: Twin messages of ‘Unplanned’: ‘Be bold’ but show ‘mercy and redemption’

NEXT: ‘Examination of Conscience,’ streaming, Netflix