‘Fighting With My Family’ is a win for all 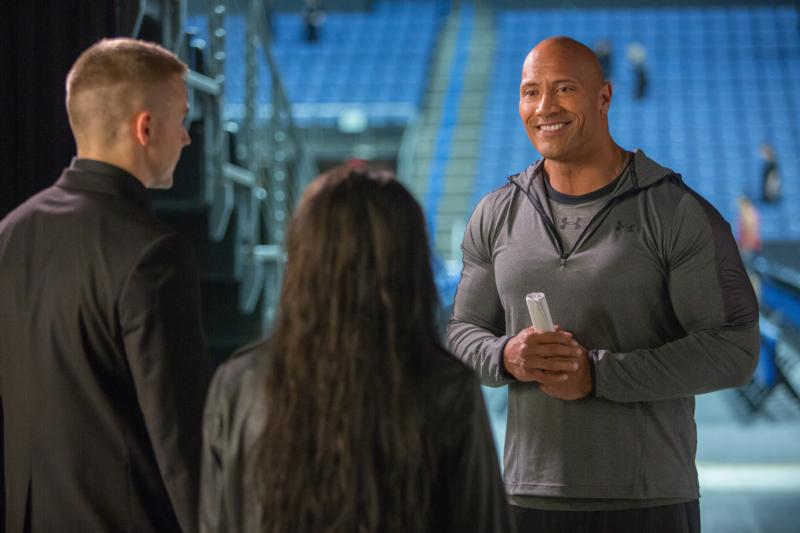 Dwayne Johnson stars in a scene from the movie “Fighting With My Family.” (CNS photo/MGM)

NEW YORK (CNS) — You can’t judge a book by its cover — or, in this case, a film by its title. “Fighting With My Family” (MGM) turns out to be an entertaining comedy-drama despite its off-putting name.

Taken literally, the movie’s title is wholly accurate, for this is the fact-based story of a tight-knit British clan obsessed with the sport of wrestling.

Florence Pugh stars as Saraya-Jade Bevis, who competed under the name “Paige” and became a superstar of the World Wrestling Entertainment (WWE) empire. In 2014, at age 21, she won the “Divas Championship,” becoming the youngest female champ in WWE history.

One could say wrestling is in Paige’s DNA. Her parents, Julia (Lena Headey) and Ricky (Nick Frost), are former wrestlers who now manage a carnival-like wrestling show. They raised their children to regard the sport as their veritable lifeblood — and a ticket out of poverty.

“Some people find religion,” Julia explains, rather dubiously, “we found wrestling as our salvation.”

Paige admires her older brother, Zak (Jack Lowden), her frequent partner in the ring. (Yes, men and women are often pitted against each other, and the violent takedowns can make for uneasy viewing.)

When not grappling, Zak and Paige run an after-school wrestling program for at-risk teens, to keep them off the streets and build self-esteem.

Pressed by their parents to go for glory, Zak and Paige travel to London, where the WWE holds a tryout for wannabe stars, overseen by gruff trainer Hutch (Vince Vaughn). There they meet their idol, real-life former WWE superstar Dwayne “The Rock” Johnson (playing himself), who offers sound advice.

In a surprise, Paige nails her audition, and is invited to the official WWE training camp in Florida. Zak, hoping to support his pregnant girlfriend through a lucrative contract, is crushed at being rejected. Herself upset over being separated from Zak, Paige reluctantly heads to the Sunshine State where, as something of a fish out of water, she is ridiculed and ostracized by her fellow contestants.

Writer-director Stephen Merchant channels the “Rocky” films in this rousing underdog tale. The seemingly insurmountable challenges test Paige’s faith in herself and that of her anxious family back home.

The rough edges of “Fighting With My Family,” including streetwise cursing and sexual banter, place the movie out of bounds for younger viewers. An exception might be made, however, for mature adolescents who would benefit from this uplifting picture’s positive messages about perseverance, forgiveness and the bonds of friendship and family.

The film contains occasionally violent wrestling action, an out-of-wedlock pregnancy, drug references, sexual innuendo and some profane and crude language. The Catholic News Service classification is A-III — adults. The Motion Picture Association of America rating is PG-13 — parents strongly cautioned. Some material may be inappropriate for children under 13.