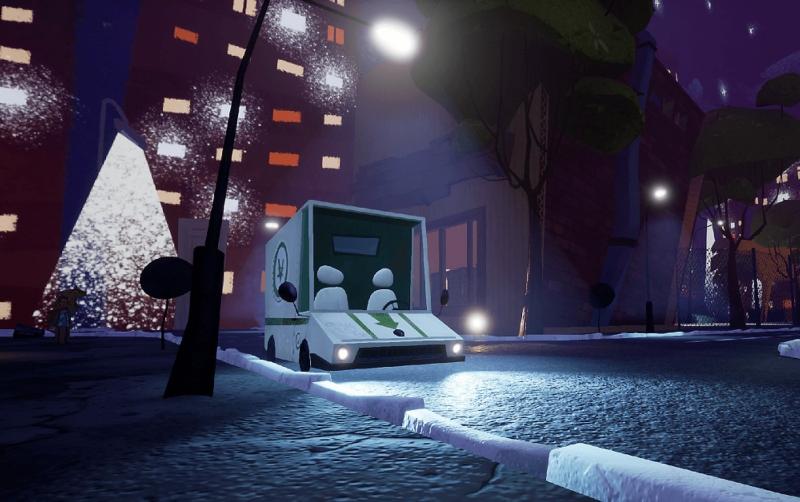 This is an image from the video game “Hello Neighbor: Hide and Seek.” (CNS photo/tinyBuild)

NEW YORK (CNS) — “Hello Neighbor: Hide and Seek” (tinyBuild) is the prequel to a surprise cult favorite of 2017, “Hello Neighbor.” This suspenseful puzzle game answers many questions players were left asking after the first title’s conclusion.

Gamers enter into the imaginations of two young children, exploring new worlds shaped out of ordinary household objects like chairs and bookshelves. However, despite its innocent-sounding name (shades of TV’s Mr. Rogers) and colorful graphics, buyers should be aware that this latest release has a grim undercurrent.

The main character, Mya, engages in a series of hide-and-seek games with her brother, Aaron. Each stage includes scenarios that become darker as the children cope with the sudden loss of their mother and the rapid deterioration of their home life.

In one scenario, Aaron pretends to be a tiger, another finds him using a popgun to hunt down a zombified Mya. As gameplay continues, Aaron’s demeanor shifts: initially lighthearted, he becomes increasingly agitated at the family’s new situation. Whereas he’s playful as the tiger, he’s kicking at toys and angrily firing his toy gun at Mya by the zombie stage.

The family home is converted into a variety of worlds, from a city beset by cops and robbers to a snowy cemetery. Throughout, Mya collects toys hidden around the house that must be deposited into a basket for the player to advance.

The object collecting can be repetitive, and the puzzles come with a hint mechanism but no real explanation, which can be frustrating for newcomers. Mya can manipulate the environment and use devices like water pistols or spud cannons to reach new locations.

Dialogue is minimal and consists of gibberish. But characters can still be understood through gestures and facial expressions.

Music can make a powerful contribution to movies and games, and “Hide and Seek” is a case in point. The soundtrack typically triggers when Aaron is closing in on Mya, filling the player with a sense of urgency to complete the task at hand.

An important factor when it comes to purchasing games is re-playability, which “Hide & Seek” lacks. There’s no reason to start a new playthrough unless gamers want to beat the levels faster or complete in-game trophy achievements.

There is no graphic or bloody violence. After being hit by an imaginary car, for instance, Mya gently flies backwards. Similarly, when she falls off a table, she merely glides down to safety.

Aaron’s increasing disturbed behavior in the cutscenes is distressing and tragic, as he is clearly traumatized by the loss of his mother. His outbursts ultimately culminate in a heart-wrenching final exchange between the siblings.

Veteran fans of the “Hello Neighbor” universe might enjoy this new release. But it ultimately feels unsatisfying and will likely fall flat for the uninitiated.

Playable on PlayStation 4, Xbox One, Nintendo Switch and PC.

The game contains some occult elements, perilous situations and dark themes, including the death of a parent. The Catholic News Service classification is A-II — adults and adolescents. The Entertainment Software Rating Board rating is T — Teens.

PREVIOUS: From frozen heart of a grieving dad comes his ‘Cold Pursuit’

NEXT: America’s first black priest has lessons to teach us today