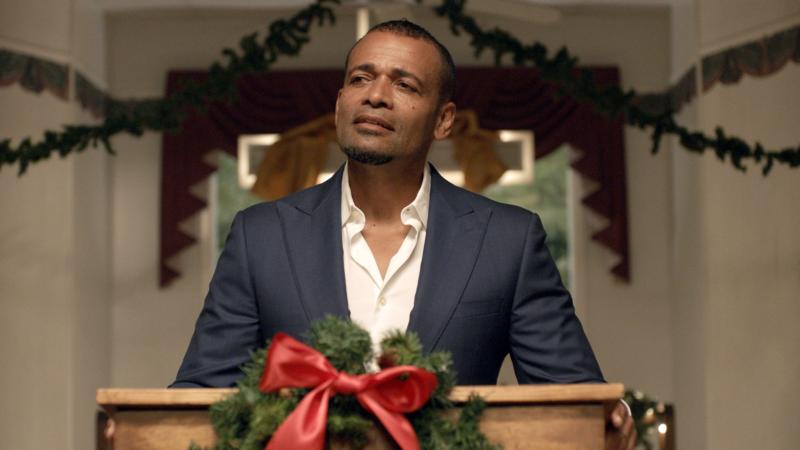 Mario Van Peebles stars in a scene from the movie “Run the Race.” Pebbles plays Pastor Baker in the movie that explores such themes as keeping trust in God, even in the midst of suffering and misfortune, as well as the importance of forgiveness. (CNS photo/Roadside)

SAN DIEGO (CNS) — The Truett brothers, Zach and Dave, have had it rough.

Their mother died of cancer. Their father, unable to cope with the loss of his wife, walked out on his teenage sons and turned to the bottle.

The brothers hope that, if one of them can earn a collegiate football scholarship, they can leave their ramshackle hometown once and for all.

But a serious head injury last season sidelined Dave, who can’t play football anymore and is now prone to seizures. So, all hope seems to rest on his older brother — that is, until Zach injures his knee during a brawl and puts their dream in jeopardy.

That’s the setup for “Run the Race,” a new Christian drama that opened in theaters Feb. 22. It’s a movie that explores such themes as keeping trust in God, even in the midst of suffering and misfortune, as well as the importance of forgiveness.

In a telephone interview with The Southern Cross, newspaper of the Diocese of San Diego, Van Peebles acknowledged that his character, Pastor Baker, isn’t the only font of spiritual wisdom in the film.

“I think it comes from all corners,” said Van Peebles, noting that other characters, like the Truett brothers’ godmother, portrayed by Frances Fisher, and their football coach, played by Mykelti Williamson, also are given some powerful lines.

But, by virtue of his ministerial role, Pastor Baker is “obviously in a position” to share these truths, Van Peebles said.

In one scene, the pastor preaches a Christmas sermon about how the birth of Christ was an example of “a game-changing, seismic-shift, capital ‘M’ moment,” after which nothing was ever the same. And he goes on to lament that many people never experience their moment because of “an affliction called ‘the somedays'”: They continually put off the important things in life, like getting right with God, until some undetermined date in the future.

“When you’re laying on your back, you can’t help anybody else stand up,” Van Peebles said, expounding his character’s sermon. “But every day, you have the choice to do something or not. And what he’s basically saying is, don’t put that off. Tomorrow is not promised.”

Van Peebles sees a link between this message and one of his character’s other sermons, in which the pastor seems to have taken inspiration from St. James’ famous words about faith and works.

“Faith without action is rhetoric,” the actor told The Southern Cross. “You’ve got to live it, and talk it, and walk it, and not kick it down the road.”

The executive producer on the film is someone has been outspoken about his own Christian faith — Tim Tebow. The 2007 Heisman Trophy winner, former NFL quarterback and now New York Mets minor leaguer talks about his faith on and off the field.

In portraying Pastor Baker, Van Peebles said he was determined not to “other-ize” the character as if he were perfect, but rather to play him as “just a real guy.”

“I wanted him to be someone that felt real, that the things he said were basically from the heart,” said Van Peebles, who shared that he was given the freedom to ad-lib many of his lines, drawing from his own life experience in doing so.

“Don’t write people off that don’t think like you, look like you, act like you, have the same beliefs as you,” he said. “Help and love can come from anywhere. That’s the thing I’ve experienced, and so to play a pastor” who had that “at his core felt like home to me.”

For Van Peebles, the message of “Run the Race” is “maybe, in some ways, more relevant now than ever.”

“We’re culturally at a place where Americans are sort of looking at what separates us more than what unites us,” he said. “We’ve got to wake up and hold ourselves accountable, and, hopefully, perpetuate a culture of kindness.”

NEXT: Twin messages of ‘Unplanned’: ‘Be bold’ but show ‘mercy and redemption’