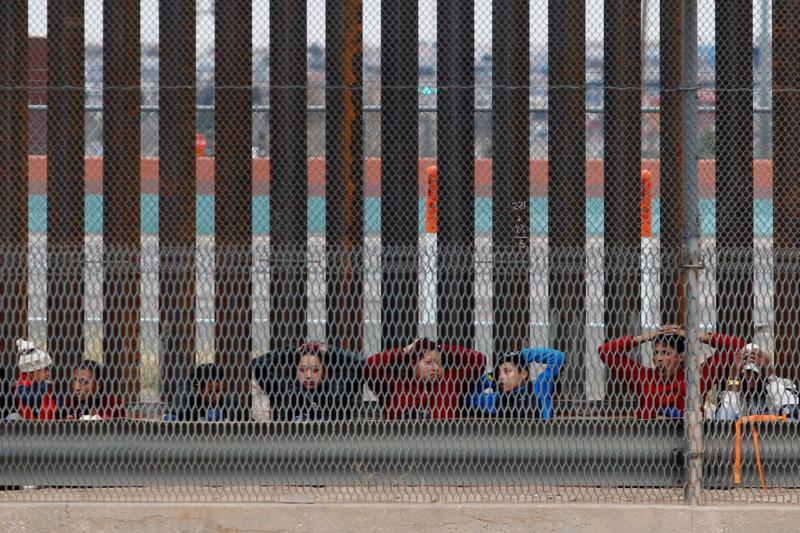 Migrants from Central America are being escorted by U.S. Customs and Border Protection officials after crossing the border from Mexico to surrender to the officials in El Paso, Texas, in this picture taken from Ciudad Juarez, Mexico, Feb.10, 2019. Hard-fought legislation that gives President Donald Trump 55 additional miles of barrier along the U.S.-Mexico border, well short of what he requested, was on its way to his desk Feb. 15, 2019, after the House and Senate both passed the measure late Feb. 14. (CNS photo/Jose Luis Gonzalez, Reuters)

WASHINGTON (CNS) — Catholic bishops near the U.S.-Mexico border, joined by other U.S. prelates, voiced opposition immediately after President Donald Trump’s Feb. 15 declaration of a national emergency so he can order construction of a barrier along parts of the border between the two countries.

“In our view, a border wall is first and foremost a symbol of division and animosity between two friendly countries,” the bishops said.

“Furthermore, the wall would be an ineffective use of resources at a time of financial austerity,” they said. “It would also would destroy parts of the environment, disrupt the livelihoods of ranchers and farmers, weaken cooperation and commerce between border communities, and, at least in one instance, undermine the right to the freedom of worship.”

Speaking at news conference in the Rose Garden, Trump said he was going to sign a national emergency declaration to stave off a flow of drugs, human trafficking, gang members and illegal immigration coming across the southern border.

The president later signed a spending bill that provides $1.375 billion for fencing and other measures along the border — a fraction of the $5.7 billion he had been asking from Congress for construction of the a barrier. Declaring the national emergency could grant him up to $8 billion for his project.

The promise of a wall on the southern border was key to his presidential campaign, but as a candidate he said neighboring Mexico, not the U.S., would pay for the structure. When Mexico refused to pay for the wall, he turned to U.S. lawmakers for funding, but they have largely refused to grant U.S. taxpayer money to build it, which led to a partial government shutdown earlier this year.

In a separate bishops’ statement following Trump’s announcement, Cardinal Daniel N. DiNardo of Galveston-Houston, president of the U.S. Conference of Catholic Bishops, and Bishop Joe S. Vasquez of Austin, Texas, chairman of the USCCB Committee on Migration, said they were “deeply concerned about the president’s action to fund the construction of a wall along the U.S.-Mexico border, which circumvents the clear intent of Congress to limit funding of a wall.”

“We oppose the use of these funds to further the construction of the wall,” Cardinal DiNardo and Bishop Vasquez said. “We remain steadfast and resolute in the vision articulated by Pope Francis that at this time we need to be building bridges and not walls.”

In their statement, the border bishops and the other prelates who joined them said that while they agree with the president that there is a “humanitarian challenge” at the border, “erecting a wall will not solve the problem,” they said, and they asked Congress to step in with more humanitarian responses.

In his speech, the president said he wanted to build the wall “not just because it was a campaign promise,” but because “everyone knows a wall works” and national emergencies such as the one he is calling for had been used by presidents previously without problems. Such declarations are common and at least 31 declared emergencies remain in place, but the current one seems to be designed to get around Congress.

The dozen or so bishops in their statement said they worried that a wall would drive migrants to more remote regions of the border and risk great loss of life.

When a wall was constructed in the San Diego area in the mid-1990s, for example, migrants were driven, often by smugglers, to the desert of Arizona and other remote regions in order to cross the border, they said, citing U.S. Border Patrol statistics that showed that over 7,000 migrants died in those areas from 1998 to 2016.

“The truth is that the majority of persons coming to the U.S.-Mexico border are asylum-seekers, many of whom are women and children from Guatemala, Honduras and El Salvador who are fleeing persecution and violence in their home countries,” the bishops’ statement said. “Along their journey to safety, they encounter many dangers. A wall would not keep them safe from those dangers. Rather, a wall would, further subject them to harm by drug cartels, smugglers, and human traffickers.”

They said that while the country had a right to control and secure its borders, “border enforcement must protect and preserve the human rights and life of all persons, regardless of their legal status.” Instead of a wall, they said, Congress should focus on more humane policies, such as reforming the immigration system “in a manner that is just, protects human rights and reflects American values.”

“It is powerful that the bishops on the border are speaking against a wall. They, more than anyone in the church, know firsthand the reality along the border, and the suffering endured by families and children at the hands of recent U.S. policies,” said Kevin Appleby, senior director of international migration policy at the Center for Migration Studies in New York in an email to Catholic News Service.

The Center for Migration Studies and the Ignatian Solidarity Network in Ohio joined in a statement signed by more than 40 faith leaders questioning the morality of structure.

“History has shown that border walls constructed to restrict human rights, such as the Berlin Wall, cause harm to human beings, all of whom possess God-given rights and are equal to us in the eyes of God. Because of this injustice, they eventually come down,” the statement said.

Other Catholic groups such as the Sisters of Mercy and the Columban Center for Advocacy and Outreach also voiced early opposition to Trump’s declaration.

“We unequivocally oppose the president’s decision to declare a state of national emergency in order to circumvent Congress and divert funding to pay for construction of a border wall. This decision is immoral and unnecessary. The real emergency is the dehumanization of migrants and the utter disregard for border communities and the environment. Construction of a wall and further militarization is not a solution,” said a statement from the Columban center.

“A declaration of a national emergency aimed at funding an immoral wall will not correct years of failed immigration policy or ameliorate the U.S. role in root causes of migration,” said Mercy Sister Patricia McDermott, president of the Sisters of Mercy of the Americas, in a statement. “The real one is of disinformation and misplaced values. President Trump fans a fear of asylum seekers by mischaracterizing them as criminals when the vast majority are people fleeing unspeakable atrocities for safety and a better life.”

Trump said he expected lawsuits over the declaration but hoped the U.S. Supreme Court would ultimately rule in his favor. He defended his actions and said such declarations have been made in the past “for far less important things.”

“I didn’t need to do this, but I’d rather do it much faster,” Trump said, while voicing frustration that seemed directed at former House Speaker Paul Ryan, R-Wisconsin, whom Trump seemed to blame for Congress’ early failure to fund his proposed border wall.

“I’m very disappointed in certain people, one in particular for not having pushed this faster,” Trump said. A reporter then asked: “Are you referring to former Speaker Paul Ryan?”

“Let’s not talk about it. What difference does it make?” the president responded.

NEXT: DiNardo: Action on McCarrick ‘clear signal’ church will not tolerate abuse