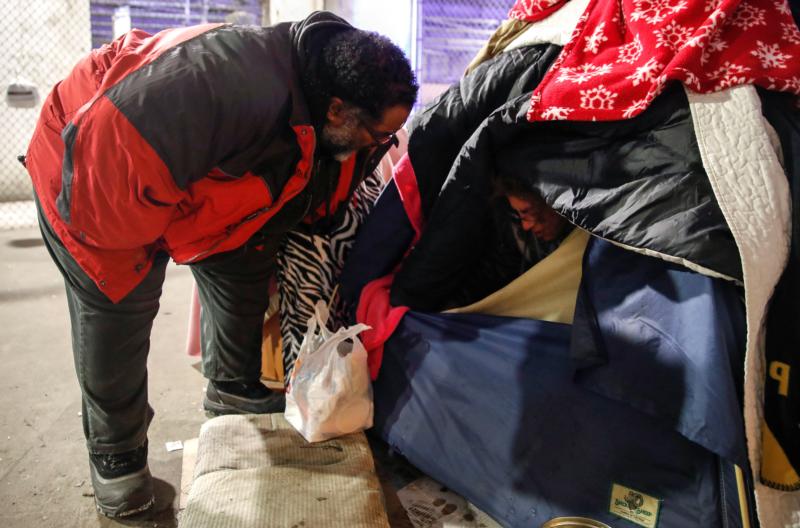 Richard S. Vargas, the Salvation Army’s director of Community Social Services, checks on a homeless woman during a cold wellness checkup in Chicago Jan. 31, 2019. The latest federal estimate of the number of Americans in poverty is now below 40 million for the first time in a long time. The actual figure is 39.7 million, which means one in every eight Americans is still poor. (CNS photo/Kamil Krzaczynski, Reuters)

WASHINGTON (CNS) — It might be wise to apply domestically what 20th-century Brazilian Archbishop Helder Camara, whose sainthood cause was opened four years ago, said about poverty: “When I give food to the poor, they call me a saint. When I ask why the poor have no food, they call me a communist.”

Despite the latest federal estimate that the number of Americans in poverty is now below 40 million for the first time in a long time — the actual figure is 39.7 million — that still means one of every eight Americans is poor.

Only a small number of them are on street corners or intersections begging for handouts.

“There are folks living at shelters who, because of safety, because of fears, they won’t be on those corners,” said Ralph McCloud, executive director of the Catholic Campaign for Human Development.

“We don’t see people (who are) doubling or tripling with neighbors and friends because they’ve been evicted,” McCloud said, adding that recovery from the “Great Recession” of 2007-09, while the most sustained recovery from an economic slump in U.S. history, was not spread evenly and that some are still digging out from under it.

McCloud said the recent federal government shutdown highlighted how even people in middle-class jobs live paycheck to paycheck. He told of the manager of an apartment complex in the Washington area who was besieged by his tenants, many of whom were furloughed federal employees, asking him to give them some slack on their monthly rent payments. He did, but found he had so little money coming in that he had to lay off the complex’s janitor.

There’s also an interconnectedness between poverty and other issues. “They might be problems with education, with health care, with mental health, a host of other issues,” McCloud told Catholic News Service.

In some places, according to McCloud, people may be literally unable to flee from poverty, which can affect a family for generations — and often enough from just one bad circumstance.

That’s what has been seen by the Society of St. Vincent DePaul, as it started undertaking an effort 15 years ago to begin addressing the causes of poverty and not just offer a safety net.

Many Vincentians would “see the same people come back again and again,” said Ralph Middlecamp, the society’s national president. It marked, for some, a drastic change in direction. Middlecamp put it this way: “We’ve recruited a basketball team. And we’ve started to ask them to play hockey.”

“We continue to provide all the safety-net things,” he added. But more and more, the society is looking at what causes the poverty they’ve been treating for 153 years. “It takes a whole variety of programs that meet local needs. One thing about the St. Vincent de Paul Society is that we’re very grassroots,” Middlecamp said. “Every community has different needs, but there are different organizations that we can collaborate with.”

Some initiatives go back 50 years, he added. The year 1969 also marks the start of CCHD, the U.S. bishops’ domestic anti-poverty program.

Two initiatives that can serve as templates for St. Vincent de Paul conferences and councils nationwide — conferences are often parish-based, while councils are a collection of conferences — are “Getting Ahead” and the new “Immersion” program.

Getting Ahead is a mentoring program, with a series of group activities for people in poverty “to discover their assets, to discover their resources, to build a support team to figure out that path they need to go forward,” Middlecamp said.

Immersion takes best practices from a series of separate St. Vincent de Paul programs to help recently released prison inmates — often called “returning citizens” — to keep them from sliding into poverty and returning to crime. These programs all had recidivism rates lower than the national average; one had a rate of just 12 percent.

What Middlecamp said he wants to see in an expanded Immersion program is something “reproducible” by conferences and councils.

Network, a Catholic social justice lobby started by women religious, started working on its “21st Century Poverty” campaign in 2015, and although it’s issued a study guide highlighting some of the issues surrounding poverty in today’s society, there’s still more work to do, according to Laura Peralta-Schulte, Network’s senior government relations advocate.

Already Network has its “2020 agenda” unfurled, which Peralta-Schulte said includes many areas where the organization has demonstrated expertise in the past, such as family-friendly workplace policies, living wage policy, access to health care and access to citizenship.

Given the tenor on Capitol Hill for much of the decade, it looked at first as if it was going to be a hard slog, she said. “We are frankly pretty heartened to see that a number of the issues we identified are being talked about in Congress,” Peralta-Schulte added.

“You have a tremendous amount of folk who are working full time and just not making it,” she said. “The reality is the typical beneficiary is a 36-year-old woman with kids. It is keen for us to try to build a consensus to lift wages,” noting there has been a minimum-wage bill already introduced in the House, “and we’ll see if we can’t shake something free in the Senate.”

“It’s worth celebrating” that people are returning to work, Peralta-Schulte told CNS. “The numbers are positive. We think there is still a lot of work to do. We have two lenses the we use, and that is part of the process. We were founded by women religious. So we’re making sure that women are lifted out of poverty. When you look at poverty data, you see women, and women with children, trapped in many ways. Things like paid leave and flexible schedules, and higher wages and lessening the gender (pay) gap will benefit.

In 2007, Catholic Charities USA issued a policy paper on poverty in America, recalled Brian Corbin, its executive vice president of member services. Taking a cue from author Jim Collins, who said, “Everyone needs a big, hairy audacious goal,” “our ‘BHAG’ was to reduce poverty in half by 2020. That’s when there was a 12 percent poverty rate. We’re going to work our tail off,” Corbin said, “work with federal government, private groups. … And the next year the Great Recession hit.”

CCUSA decided earlier this decade to be a research partner with the University of Notre Dame in studies to find out what works best in cutting poverty rates. One is a random control trial — “you literally have some people receiving the service, and you have people who aren’t receiving the service, the control group,” Corbin said, adding, “You have to see how things pan out after a couple of years.”

Another study, Corbin said, has yet to be released. It is looking at the opposite — characteristics of non-poverty: a steady job, steady place to live and three months of savings in the bank, none of it from public sources. “Some people (in the study) are doing better than others,” he added.

A third study examined Chicago’s 211 help hotline. Catholic Charities of Chicago, said Corbin, is “responsible for helping out people who are about to be evicted.” Notre Dame was “able to break out some longitudinal data” from the numbers, he added, and learned “if they literally offered $300-$500 to people to avoid eviction, they would have saved thousands of dollars in eviction activity thereafter.”

Flipping the script has worked in some places. Catholic Charities in the Archdiocese of Washington was serving a lot of meals, “and they thought to themselves, ‘We’ve got a business here! We can do catering,'” Corbin said. Now it serves Head Start meals, servings for all the Catholic schools in the archdiocese, he added: “Instead of it being seen as a project of Catholic Charities, it’s an enterprise.”

The catering and food production model has been adopted by Catholic Charities agencies in Louisville, Kentucky, Baltimore and elsewhere. “Some do great,” Corbin said, “some struggle, some have to start over, just like anything else.”