Bill that prices carbon pollution would yield a dividend for everyone 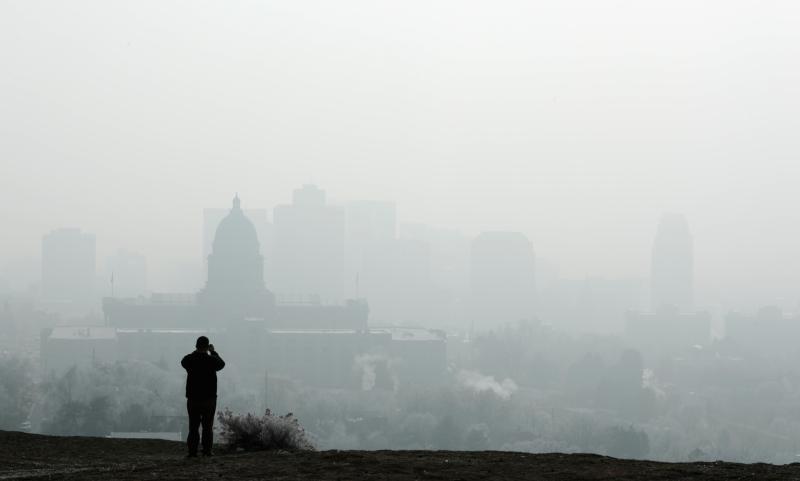 A man stops to take a picture of the Utah State Capitol and buildings that are shrouded in smog in downtown Salt Lake City Dec. 12, 2017. Catholic advocates are supporting the Energy Innovation and Carbon Dividend Act, a proposal that would put a price on carbon pollution and provide Americans with a monthly dividend. (CNS photo/George Frey, Reuters)

WASHINGTON (CNS) — A bipartisan bill that would put a price on each ton of carbon pollution and likely broaden efforts to develop forms of renewable energy is getting wide support from Catholic advocates concerned about climate change.

Seen as key to significantly reducing carbon dioxide and other greenhouse gas emissions by 2050, the Energy Innovation and Carbon Dividend Act introduced in the House of Representatives has become a priority of the U.S. Conference of Catholic Bishops, Catholic Climate Covenant and other organizations.

The bill’s importance was apparent during the recent Catholic Social Ministry Gathering in Washington. The 500 attendees who fanned out across Capitol Hill included the legislation as part of a half-dozen “asks” during the traditional day of advocacy Feb. 5.

Advocates for the legislation stress that it offers a market-based solution to reduce carbon pollution from the use of coal, oil and natural gas. It’s based on the idea that carbon emissions would decline as consumers, industry and energy companies seek cleaner, cheaper energy options.

“It’s the first time since 2009 that a piece of national legislation addressing climate change has been introduced. The significance of it is that it puts a price on carbon,” Dan Misleh, Catholic Climate Covenant executive director, told Catholic News Service. “Everybody in the world agrees if you don’t make carbon more costly, then you’re never going to get people to use less.”

Bishop Frank J. Dewane of Venice, Florida, chairman of the U.S. bishops’ Committee on Domestic Justice and Human Development, was quick to support the bill. He called it a “hopeful sign” that “climate change is beginning to be seen as a crucial moral issue, one that concerns all people.”

“At a time when the dangerous effects of climate change are becoming increasingly apparent, the need for legislative solutions like this is more urgent than ever,” Bishop Dewane said Jan. 25, a day after the bill’s introduction.

The bill has been referred to three House committees. No companion piece has been introduced in the Senate.

The legislation has several components. Most notably, it introduces a carbon fee of $15 per ton of emissions starting in 2019. The fee — some have called it a tax — would rise by $10 per ton a year until being capped at $100 per ton.

All fees collected would by placed into a carbon dividend trust fund for distribution to U.S. households. Monthly disbursements are estimated to total about $3,456 annually for a family of four, according to the pro-environment Citizens Climate Lobby, which supports the legislation and is leading a nationwide push for its passage.

The bill exempts military and agriculture emissions from the fee. It also does not regulate carbon emissions for their impact on climate change and would keep the Environmental Protection Agency from doing so for a decade. If carbon reduction goals are not met, then Congress can direct the EPA to regulate them.

Overall carbon emissions are projected to decline by 40 percent during the first 12 years after passage and by 90 percent by 2050. Beyond the taxpayer dividend, the Citizens Climate Lobby projects that the bill will lead to 2.1 million new jobs over 10 years and prevent 295,000 deaths through 2030 because of better air quality.

Rep. Ted Deutch, D-Florida, is the bill’s lead sponsor. He was joined by six Democrats and one Republican — Rep. Francis Rooney of Florida, former U.S. ambassador to the Vatican — in introducing the legislation.

“The idea behind the carbon tax mechanism would be the most efficient, most market-oriented way to start to decarbonize, especially by starting to get rid of coal,” Rooney told CNS.

“To me it makes zero sense not to put a carbon tax on coal,” he said.

Rooney’s stance is a direct rebuff to President Donald Trump, who has made coal a lynchpin in U.S. energy production.

The one-time ambassador said he wouldn’t be swayed by the president’s push to boost coal production. He also said he expects oil consumption to decline not only because of the carbon fee, but also because of improvements in electric vehicle technology that are expected to attract more buyers.

Grassroots work in support of the bill has been underway since Deutch introduced an earlier version during the lame duck session of Congress following the November election.

Steve Coleman, who is involved in the Citizens Climate Lobby Catholic outreach effort and a member of St. Dennis Parish in Madison, Wisconsin, has been promoting the bill.

The bill’s provisions demonstrate the importance of caring for the earth as well as the world’s poor, who are most affected by climate change, Coleman explained to CNS.

“The idea of putting a price on carbon, this is a really big hammer,” the retired engineer and now part-time farmer said. “It will, when enacted, reduce the U.S. carbon output by 40 percent. There’s nothing on the horizon that is even close to that.”

Sister Ricca Dimalibot, general counselor with the Sisters of Charity of the Incarnate Word of Houston, said the bill falls in line with Pope Francis’ call to care for creation and for all of earth’s inhabitants in his 2015 encyclical, “Laudato Si’, on Care for Our Common Home.”

She said she experienced the threat of climate change in the aftermath of Hurricane Harvey in September 2017 which saw southeast Texas inundated by more than 4 feet of rain. While the order’s motherhouse and the indigent health care clinic at which she works in nearby Dickinson were spared, thousands of homeowners continue to recover, Sister Dimalibot said.

“You would have to be living in a cave not to make the connection from all of that,” she said.

The order is sponsoring a workshop on the bill March 16 and has invited parishes from throughout the Archdiocese of Galveston-Houston to attend.

“I agree that you have to make legislative changes to really make an impact,” Sister Dimalibot said. “We can do personal recycling and reusing, reducing, but if you have something that is mandated, then it will have a real effect.”

While Misleh and others expect opposition to the bill from the fossil fuel industry, there has been little said since its introduction.

The American Petroleum Institute, which represents the natural gas and oil industry, has not taken a position on a carbon tax, said Sabrina Fang, senior communications associate.

She offered a statement from the organization saying that the industry is “meeting the climate challenge head-on” by investing in innovations, efficiency improvements and cleaner fuels.”

API pointed to a decline in carbon dioxide emissions over the last decade because of reduced reliance on coal, greater use of natural gas and increased vehicle fuel efficiency standards.

“The bottom line is that natural gas and oil production in America is among the cleanest in the world and our industry continues to demonstrate that meeting record demand and protecting the environment are not mutually exclusive,” the statement said.

Coleman is enthusiastic that the bill will eventually pass, if not in the current Congress, then after the 2020 election.

“Climate change has been politicized. In my view, it is not a political issue. The environment, Mother Nature really doesn’t give a squat if you are Republican or Democrat. The fallout to my grandchildren isn’t going to matter if you’re Democrat or Republican,” he said.

PREVIOUS: Speaker: Only way forward is to allow Christ ‘to come in, encounter us’

NEXT: Tolton sainthood cause advances; next step would be ‘venerable’ decree