Pope arrives in Abu Dhabi, praying for nearby Yemen 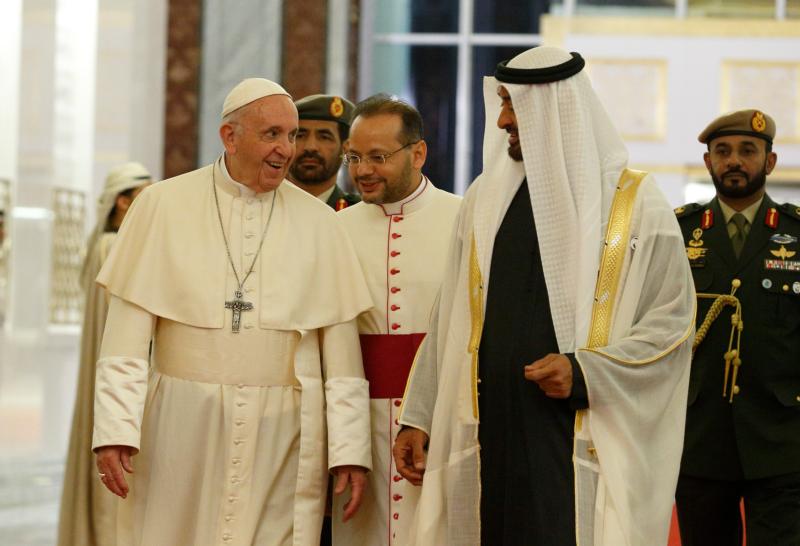 It had been a rare rainy day on the southeast coast of the Arabian peninsula, which, the pope told reporters traveling with him, was seen as a sign of blessing by the people of the United Arab Emirates.

Since the pope arrived at almost 10 p.m. local time, the official welcoming ceremony was scheduled for the next day. But there was a brief greeting inside the President’s Airport.

The pope then went to Al Mushrif Palace, the government’s guesthouse for visiting foreign dignitaries.

Pope Francis boarded the Alitalia plane for the almost six-hour flight to Abu Dhabi after praying the Angelus at noon with pilgrims in St. Peter’s Square.

After reciting the Marian prayer, the pope asked the crowd to pray for the success of his “brief but important trip.” The pope was scheduled to spend less than 48 hours in the UAE.

Many people had wondered if, during his stay in Abu Dhabi, Pope Francis would mention the ongoing war in Yemen and the humanitarian catastrophe it has provoked; the UAE has a leading role, along with Saudi Arabia, in fighting the Houthi armed movement in Yemen. Both sides have been accused of serious human rights abuses, including targeting civilians and preventing the distribution of emergency humanitarian aid.

Pope Francis spoke of the crisis after reciting the Angelus.

“With great concern I am following the humanitarian crisis in Yemen,” he told the crowd in St. Peter’s Square. “The population is worn out by the long conflict and many, many children are suffering from hunger, but they are unable to access the stores of food.”

“Brothers and sisters,” he said, “the cry of these children and their parents rises to God.”

Pope Francis called on “all sides involved” and the international community “to urgently promote the observance of the agreements that have been reached, ensure the distribution of food and work for the good of the population.”

“I invite everyone to pray for our brothers and sisters in Yemen,” he said, leading the recitation of the Hail Mary.

“Let us pray hard because there are children who are hungry, who are thirsty, who do not have medicine and are in danger of dying,” the pope said.

Before praying the Angelus, Pope Francis met at his residence with a dozen refugees — Christians and Muslims — being assisted by the papal almoner and the Rome-based Sant’Egidio Community; the group included a couple of women from Yemen, a family from Morocco and a married couple from Iran, Sant’Egidio said in a statement.

PREVIOUS: New Iraqi archbishop: Rebuilding of Mosul must include hearts and minds